Accessibility links
The Most Serene Republic's Abstract Celebration The band's dense themes and variations take time to digest, and the effect can be disorienting, as if listeners are tuned in to fragments of a larger conversation.

The Most Serene Republic's Abstract Celebration

The Most Serene Republic's Abstract Celebration

'Present of Future End' by The Most Serene Republic 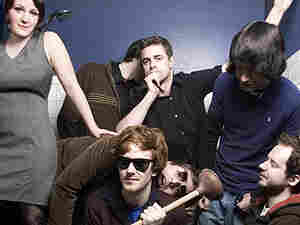 The Toronto band The Most Serene Republic plays sprawling, preciously ornamented pop, complete with anthemic swells reminiscent of Broken Social Scene, the energetic orchestration of The Polyphonic Spree and the tender-voiced moments of Ben Gibbard. But for all those accessible reference points, The Most Serene Republic isn't always an easy first listen. Its dense themes and variations take time to digest, and the effect can be disorienting, as if listeners are tuned in to fragments of a larger conversation.

Many motifs on the band's new Population feel as if they could be fleshed out to form new songs altogether. "Present of Future End," in particular, showcases the band's fascination with dynamic bombast and melodic momentum.

Quietly opening with an acoustic guitar and vague incidental noise, the song quickly explodes into a rolling chorus of blaring horns, pounding drums and celebratory shouts. But just as it settles in, the bottom drops out, revealing softer pianos and sympathetic singing. The abstract lyrical notions seem to fly by without much reprise: "To express is either kiss or complain / Bring in the arms or shove them away / Repetitiveness of a musical phrase." But for all the busy activity, the song tempers its grandiosity with subtlety, making "Present of Future End" a study in complex and ambitious pop.