Accessibility links
For Romney, Health Care Fix Nothing to Brag About The effort to extend health insurance to all Massachusetts residents showcased then-Gov. Mitt Romney's pragmatic problem-solving skills. Though he won the fight, the GOP presidential candidate has been distancing himself from the plan since it was enacted.

Listen
For Romney, Health Care Fix Nothing to Brag About 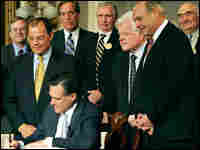 Former Massachusetts Gov. Mitt Romney (R) signed his health-care plan into law on the same stage where he debated Sen. Edward M. Kennedy (D-MA) years before. "This for me feels a bit like the Titanic returning to visit the iceberg," Romney joked during the signing. Joe Raedle/Getty hide caption 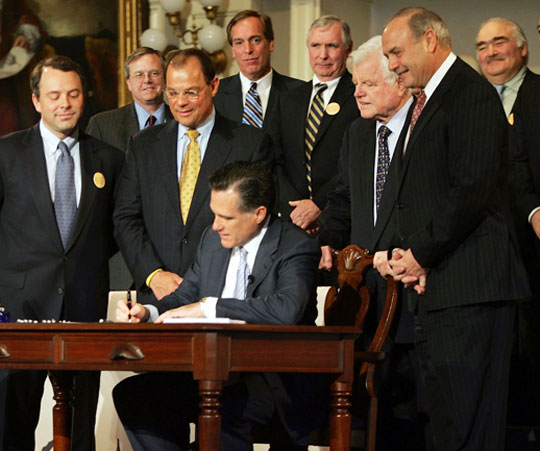 Former Massachusetts Gov. Mitt Romney (R) signed his health-care plan into law on the same stage where he debated Sen. Edward M. Kennedy (D-MA) years before. "This for me feels a bit like the Titanic returning to visit the iceberg," Romney joked during the signing.

Our series "Crunch Time" explores key moments in the careers of presidential candidates.

Read a Profile of Romney

Read about Mitt Romney's political career and his prospects as a presidential candidate.

As governor of Massachusetts, Mitt Romney pioneered an effort to extend health insurance to all residents. The move showcased some of the skills that made Romney a successful management consultant and venture capitalist. It also sealed his reputation with some critics as a show-boater with little taste for political give-and-take.

A Man Who 'Likes to Get the Facts'

One of the most famous stories from Romney's successful business career happened years before he became governor of Massachusetts. It involved his decision to invest in Staples, the office supply company, then a startup. The experience went on to influence his health care plan.

Romney's investment firm was initially skeptical of the idea. A survey of business customers suggested that most firms didn't spend as much money on pens and paper as the office superstore would need to be successful.

Staples founder Tom Stemberg recalled telling Romney to do another survey — and this time, count the invoices to see what the companies actually spend on office supplies.

"About a week later, they called me back in. And Mitt had made these guys go into the offices of these small law firms and accounting firms and, literally, go through their files, adding up the invoices — with an adding machine — of what they were spending," Stemberg said. The research confirmed that the companies were spending more than enough to justify the investment.

"Romney likes to get the facts," Stemberg said. And it didn't hurt that "he's an incredibly cheap guy," who could appreciate the value of a discount paper clip, he said.

When Romney became governor of Massachusetts in 2002, Stemberg served on his transition team and suggested his old friend take a look at the problem of the uninsured.

Romney's approach to the problem involved the same kind of thoughtful analysis that made him a multimillionaire and led one magazine to nickname the former management consultant "Mr. PowerPoint."

"I was incredibly impressed," said Jon Gruber, an MIT economist who advised Romney and his team. "I went into that meeting and came out as a Democratic voter scared about the prospect of him as a Republican candidate. I mean, he's brilliant. He clearly had a grasp of the issues. He's incredibly personable and powerful. And I just came away totally impressed."

In Massachusetts, the uninsured population consists of three distinct groups, each with its own set of needs. Some of the uninsured need a subsidy in order to afford health insurance. Some qualify for existing government insurance, but need a simpler application process. And a third group could pay the premiums on their own, but need a push to do so.

Romney developed a plan to address each of those groups, but only after a good deal of spirited debate.

"I don't mind saying that there's times when I'd come across the table at the governor and say, 'I don't think you're thinking about it right.' And he's open to that," Murphy said. "He's had a 30-plus year career of smart people around the table who've got views. And he's a gentleman of such 'mind clock speed,' he can digest it all and makes the right decision a lot of the time."

'A Unique Opportunity ... Let's Not Lose It'

Once Romney had made his decision on health care, though, he seemed to have little interest in the political horse-trading needed to get that plan through the state's Democratic legislature.

"Mitt Romney would rather reach for the headline than reach across the aisle to Democrats," said Massachusetts House Speaker Salvatore DiMasi. Romney didn't seem to understand that unlike a CEO, a governor can't simply issue orders from the corner office, DiMasi said.

Their biggest battle was over what role employers should play in the health-care plan. Dimasi wanted a payroll tax on employers that didn't provide health insurance. Romney believed that was unnecessary.

By early 2006, the plan was in danger of bogging down. Murphy said that's when Romney decided to make house calls, delivering a personal letter to the speaker's home, saying, "We have a really unique opportunity here. Let's not lose it."

"It's curious that he would take credit for actually going on a Sunday, when we're here every single day and our offices are right down the hall," DiMasi said.

The letter may not have been the breakthrough, but eventually the Massachusetts House and Senate agreed to a plan that generally followed Romney's proposal. The payroll tax on employers that didn't provide health insurance was whittled down to a token fee of $295 per worker.

Sen. Edward Kennedy (D-MA) joined Romney for a highly-choreographed signing ceremony at Boston's Faneuil Hall. The two had squared off in a Senate race 12 years earlier, when Romney was outclassed in a debate by Kennedy on the very same stage as the ceremony.

"This, for me, feels a bit like the Titanic returning to visit the iceberg," Romney joked during the signing.

The bipartisan goodwill was only skin deep: Romney had quietly vetoed the $295 fee on Massachusetts employers.

It was a purely symbolic gesture — his veto was easily overridden. But it was the beginning of Romney's effort to distance himself from the very health-care plan he'd pioneered.

That gap only widened as Romney began to court conservative primary voters in the presidential race. On the campaign trail, Romney offered a national health-care plan that leaves out one of the central features of the Massachusetts plan: a requirement for individuals to buy health insurance. When Hillary Clinton proposed a plan that included such a requirement, Romney attacked it.

"To be honest, this was his signature achievement. And he essentially walked away from it on the campaign trail. Not just not mentioning it, but essentially disowning it," Gruber said.

So far, the Massachusetts health-care plan appears to be working well, although some of the mandates don't take effect until next year. About 200,000 more people now have health insurance in the state, and individual premiums have fallen. That's a victory for Romney, the pragmatic problem solver. But for the reinvented Romney, it's nothing to brag about.