Accessibility links
Deborah Harry's 'Necessary Evil' Harry, the Blondie singer and punk legend, is back with her first solo album in 14 years. 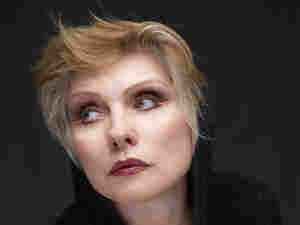 Deborah Harry, the Blondie singer and punk legend, has just come back with her first solo album in 14 years.

After Blondie disbanded, Harry put out several solo albums and appeared in Hollywood films. The group got back together in the late '90s and produced another hit, "Maria." Harry was 53 at the time, which made her the oldest female vocalist to have a #1 single on the British pop charts.

Harry hopes to repeat that success with Necessary Evil. The first single, "Two Times Blue," hit #5 on the Billboard Dance Chart, and she's currently on a 22-city tour.

Some of Harry's new songs reflect the Blondie sound, while others have more of a punk feel. Harry reunited with longtime partner Chris Stein, with whom she co-founded Blondie, for several Necessary Evil songs. She also collaborated with Super Buddha, the Brooklyn-based team of Barb Morrison and Charles Nieland, who have also worked with The Scissor Sisters and Rufus Wainwright.

Here, Harry talks about the changing role of producers and the radical developments in the music industry since she first got on stage at CBGB's back in 1974. She also elaborates on what she brings to the studio now that she didn't back then, and how audiences respond to her amped-up stage performance.