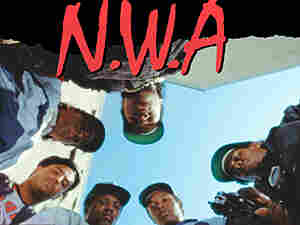 From the cover of Straight Outta Compton. hide caption 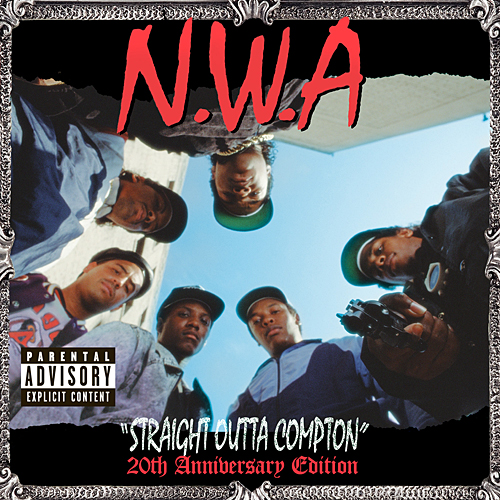 Cover art to the 20th-anniversary reissue of Straight Outta Compton.

The cover photo for Straight Outta Compton says it all.

It's taken from the viewpoint of a man who's likely caught an official N.W.A beat-down. Staring up, he sees a circle of six dead-serious-looking young men.

True, Ice Cube does sport a Jheri curl — that's kind of funny. More sobering, though, is Eazy-E pointing a handgun down right at your face, ready to finish you off. The message? You stepped into Compton, fool.

It's been more than two decades since the south Los Angeles rap crew N.W.A dropped the album Straight Outta Compton. A special 20th-anniversary CD comes out today. Back in the late '80s, that gun-wielding, gang-banging, cop-shooting disc quickly turned N.W.A into a hip-hop household name.

N.W.A wasn't the world's first gangsta rap act. And it wasn't necessarily the baddest. But it convinced many people otherwise.

They wanted to talk about what they were going through, seeing. And this is the part of L.A., ghetto America, that mainstream America and media ignored.

N.W.A pulled some impressive artistic and marketing stunts with the release of Straight Outta Compton. The disc got almost no radio play and still went double-platinum. It launched the legendary careers of Dr. Dre, Ice Cube and the late Eazy-E.

But N.W.A's biggest coup was the way its members got fans to believe they were all cold-hearted gangsters.

Greg Mack co-founded the station KDAY, one of hip-hop's few L.A. radio outlets during the late 1980s. Mack knew N.W.A and agreed to air the group's early music when nobody else would.

"They were always good kids," Mack says. "Eazy ... was so in tune to how to market himself and N.W.A. He had a vision and he followed through with it."

Eric "Eazy-E" Wright was a well-known Compton drug dealer who wanted to break into the rap game. He had the cash to start a hip-hop label, but he needed talent.

So in early 1987, he teamed up with Andre "Dr. Dre" Young, then a teenage father with a solid reputation as a disc jockey and producer. Dre enlisted O'Shea "Ice Cube" Jackson, a master at writing so-called "gangsta rap." Their songs were narratives about the street hustler's life of drug dealing and murder — a lifestyle Ice Cube and Dr. Dre never lived.

They added their friends MC Ren and DJ Yella, and Eazy named the band "Niggaz With Attitude." Two years later, at the end of 1988, N.W.A released Straight Outta Compton on Eazy's Ruthless Records.

With Straight Outta Compton, N.W.A put up its own brand of hardcore rap — devoid of both politics and apologetics. Unlike their L.A. gangsta rap forefather Ice-T, N.W.A had little interest in cautionary tales. It took all the taboos — sex, drugs, violence, lots of swearing — threw them in the back of a tricked-out '64 Cadillac and floored it down the fast lane.

Young suburban white America ate up every bit of it.

But it wasn't all about sensational marketing, according to Soren Baker, executive editor of hip-hop magazine The Source. He wrote the liner notes for the Straight Outta Compton 20th-anniversary release.

"They wanted to talk about what they were going through, seeing," Baker says. "And this is the part of L.A., ghetto America, that mainstream America and media ignored."

The original Straight Outta Compton release has 13 songs, including N.W.A's most infamous track, "F— Tha Police." The single was recorded as a protest against police brutality.

At the time, the FBI sent a letter to N.W.A's label, Priority Records, saying that the song encouraged cop-killing. Off-duty police officers refused to provide security during N.W.A's national shows, effectively shutting down the group's concerts. But the album just kept selling.

What probably helped Straight Outta Compton do so well was that it wasn't all gangsta gunplay. There's a dance track ("Something 2 Dance 2") tacked on to the end. And Dr. Dre gets loose on the mic for the album's only profanity-free cut: "Express Yourself."

Ice Cube quit the group in 1989. Dr. Dre split with Eazy two years later over money issues. The two lobbed disses at each other until just before Eazy-E died of complications from AIDS in 1995.

Today, Straight Outta Compton is a reminder of brighter days in hip-hop's most notorious left-coast 'hood. Five young brothers showed how to take hyper-violent hardcore rap and give it the sweetest twist of gangster finesse.