Accessibility links
Carmen McRae: 'Painter of Song' She was an excellent pianist, songwriter, storyteller, even actress. But Carmen McRae was best known as an outstanding song stylist, whose great strength was in her phrasing and interpretation of lyrics. 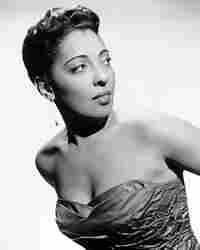 An outstanding song stylist, Carmen McRae's great strength was in her phrasing and interpretation of lyrics, especially in ballads. In a long and distinguished music career, she was also an excellent pianist, songwriter and storyteller.

McRae was born in Harlem on April 8, 1922. From an early age, she studied piano and became an excellent performer.

While still in her teens, McRae met composer and arranger Irene Wilson Kitchings, who became her mentor. McRae credited Kitchings for steering her career as a singer and for helping her connect with vocalist Billie Holiday. Holiday would also have a profound effect on McRae's career, helping her to shape her own sound.

For several years, McRae supported herself with secretarial work while performing occasionally as a singer and pianist. She worked briefly with the bands of Benny Carter, Count Basie, Earl "Fatha" Hines and Mercer Ellington, a childhood friend. She recorded for the first time as a pianist with the Ellington Orchestra in the mid-1940s.

McRae also landed a gig at Harlem's famed Minton's Playhouse as a stand-up singer for the Tony Scott band. While singing at Minton's, McRae captured the attention of the jazz world.

In 1954, she was named "Most Promising New Vocalist" in the Down Beat critics' poll and "Singer of the Year" by Metronome. She was then able to record her first album as a leader for Decca Records.

For years, McRae focused her attention on honing her art and her own musical personality. She collaborated with musicians such as pianist Dave Brubeck and guitarist Joe Pass. She also started acting, landing bit parts in the TV miniseries Roots and the movie Jo Jo Dancer with comedian Richard Pryor. However, her principal acting gig was in her interpretation of song lyrics. Writer Ralph Gleason once described McRae's singing as "a short one-woman exercise in dramatic art."

As McRae got older, she focused more on songs with lyrics that reflected personal meaning and experience. McRae's style, both on and off the bandstand, has been admired by her peers such as Etta Jones, Ernestine Anderson and Abbey Lincoln, and she was a role model for singers such as Carol Sloane.

In 1991, McRae realized that she was too ill to perform. A few years later, she suffered from a stroke and never recovered: She died on Nov. 10, 1994. Carmen McRae's music, however, lives on.