Accessibility links
The 'Far Out' Music of Fred Katz Fred Katz wrote for film in Hollywood, accompanied Harpo Marx on piano and taught college anthropology, all as a high-school dropout. But that was after he played with the Chico Hamilton quintet — and brought the cello into modern jazz.

Listen
The 'Far Out' Music of Fred Katz 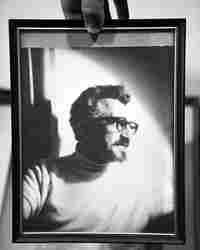 Fred Katz holds up an older portrait of himself at his California home. Ari Michelson hide caption 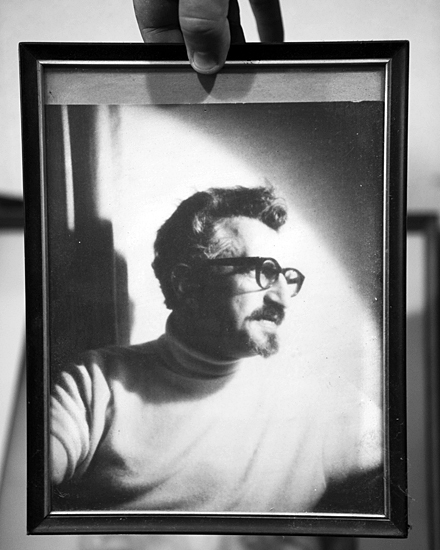 Fred Katz holds up an older portrait of himself at his California home.

Though Zen: The Music of Fred Katz was credited to and recorded by the Chico Hamilton quintet, Katz wrote and arranged the entire album. The tunes vary in identity, from a chamber-music duet to a feature for Katz's pizzicato technique to quirky, up-tempo bebop — with bowed cello, of course.

For Folk Songs for Far Out Folk, Katz put together three different ensembles — including some of Chico Hamilton's sidemen — to perform his jazz arrangements of African, American and Hebrew folk music. "I think it is time for jazz players and composers to extend their horizon toward other cultures rather than to Tin Pan Alley tune pickers," Katz wrote in the liner notes.

Been in the Pen So Long 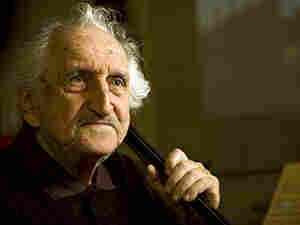 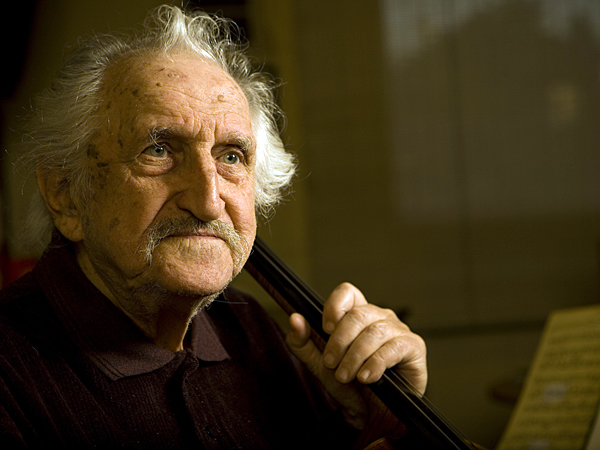 Fred Katz, pictured here in his Los Angeles home, has studied with cello master Pablo Casals, served as an A&R man for Decca Records and taught jazz in a Benedictine monastery.

Fred Katz lives in a ranch house on a quiet street in the suburbs south of Los Angeles. He's set up a music studio in his garage.

On a wall is a faded poster for the 1960 version of Little Shop of Horrors, one of three Roger Corman films Katz scored. At 88, Katz is still composing, often as he sits in front of the 88 keys.

By any measure, Fred Katz has had an extraordinary career. Credited with bringing the cello into modern jazz, he was a member of the Chico Hamilton quintet, one of the beacons of the Los Angeles jazz scene in the 1950s. He wrote for film in Hollywood, provided piano accompaniment for Harpo Marx and taught college anthropology. So remarkable is his music that earlier this year, a small record label reissued one of Katz's old recordings: 1958's Folk Songs for Far Out Folk.

Near Katz's studio sits a Zen garden, a nod to his embrace of Buddhism a half-century ago. Katz is also Jewish, and inside his house are many Jewish mystical texts that he studies on the Sabbath.

His life and career have been similarly all-embracing. By the time he was a teenager, he was an accomplished pianist and cellist — and a card-carrying member of the Communist Party. Which led him to folk music.

"The Communist Party in those days, we used to do hootenannies," Katz says. "And that was part of the radical movement, to bring back American folk poetry. We really were terrific that way."

After World War II, Katz played piano for the likes of Vic Damone and Lena Horne. Horne's drummer was Chico Hamilton, who was putting together a group of his own and invited Katz to join as a pianist.

Katz was a decent improviser on the piano, but he says that initially, he couldn't think like a jazz man on the cello. The group's saxophonist and flautist Buddy Collette remembers a gig in Long Beach, Calif., where that changed. During the quintet's breaks, Katz would sit at the front of the stage and play solo cello. When the rest of the musicians returned to the bandstand, Katz was stranded out front.

"He really couldn't get back to the piano," Collette says. "We were all in the way. So the band would hit without him, and now he's got the cello in his lap, so he starts playing the lines from the piano on the cello. We created something without even looking for it."

The quintet's sound — cello, guitar and reeds up front — became a distinctive part of the Los Angeles jazz scene. It remains one of the first examples of the cello used as a jazz instrument.

"So often, the cello ends up sounding kind of square or folky or scratchy or something not jazz," says Fred Lonberg-Holm, a Chicago-based jazz cellist who's recorded a Katz tribute album. "And Fred managed to find a way to make it swing."

Katz was attracting enough attention as a member of Chico Hamilton's group that he started making records of his own. In 1958, he recorded the album Folk Songs for Far Out Folk.

Katz doesn't play on the album, but he considers it the pinnacle of his work as an arranger. He says the disc explores the relationship between spirituality, folk music and jazz, and he assembled three separate ensembles to perform his arrangements of African, American and Jewish folk songs.

Katz continued recording and performing into the 1960s. But at the end of the decade, he joined the anthropology department at California State University at Fullerton — as a high-school dropout — where he spent close to 30 years teaching comparative religion, ethnomusicology and magic.

He remembers meeting with one of the school's skeptical deans.

"I wrote a three- or four-page summary of what I was going to teach," Katz says. "It took me about a half-hour. My mind was that clear. So I made that connection between the shaman, between the magic of the aborigines, between the guy who practices magic by asking for rain. In other words, I was making the point that magic came about as a result of wishing for things.

"And I came in with that stuff, and he said that sounds great. Then later on, he told me, he says, 'You know, I'm an amateur magician myself.'"

Katz retired from the university in 1990, but he continues to make music. Over the course of his remarkable career, he's written solo cello suites and works for orchestra, and today he's working on piano preludes inspired by Jewish mysticism.

Katz shrugs at his accomplishments.

"At no time did I think I was doing anything unusual," he says. "It was that natural to me. It was like drinking coffee. I mean, it was like, that's what I do. It was no big tzimmes, as we used to say. No big deal."

Today, Fred Katz suffers from agoraphobia and rarely leaves his home, so it's unlikely that anyone will hear his latest compositions. But people can hear Folk Songs for Far Out Folk, out now.