Accessibility links
Rickman Gives Voice to 'Sweeney Todd' Nemesis Alan Rickman plays the evil Judge Turpin in Tim Burton's Sweeney Todd. He discusses his distinctive sound, his experience with musicals and the criticism he received at drama school about his voice. 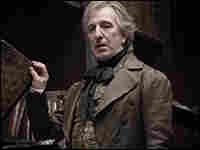 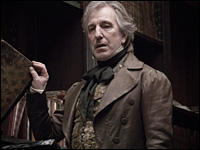 Rickman has played a number of villains during his film tenure. From Hans Gruber in Die Hard to Severus Snape in the Harry Potter films, Rickman has used his deep voice to instill fear — a tradition that continues in Sweeney Todd.

The British actor talks to Michele Norris about his distinctive ability to make the word "gander" sound ghoulish. He also shares his recollections of the first musical he ever performed in (Little Mary Sunshine) and how one vocal coach in drama school said his voice sounded as if it was coming out of "the back end of a drain pipe."

Alan Rickman is accustomed to playing villains from Hans Gruber in "Die Hard" to Professor Snape in the "Harry Potter" films. Rickman has used his deep voice to instill fear. Now, he does it again as the evil Judge Turpin in "Sweeney Todd."

In this scene, Judge Turpin warns a young fellow to stay away from a girl.

Mr. RICKMAN: (As Judge Turpin) Your meaning is immaterial. Mark me. If I see you next again on the street, you'll rue the day you were born.

NORRIS: whew, never has word gander sounded so ghoulish. I spoke with Alan Rickman about his distinctive voice and his experience with musicals.

Mr. RICKMAN: Well, we all had to do one at drama school. And mine couldn't have been more different. I played Captain Big Jim Warrington of forest rangers strangers in "Little Mary Sunshine." This is a little arm-testing.

NORRIS: I actually read and reading up on you that you were - when you were in drama school, you're discouraged from singing. Why is that?

Mr. RICKMAN: To know what you are reading.

NORRIS: I was wondering how you did it and…

NORRIS: For your singing, certainly not for you're speaking.

NORRIS: Now, to listen to you, I'm so surprised to hear that. Why would they criticize you?

Mr. RICKMAN: What did they say to me? You sound - Alan, you sound as if your voice is coming under the back end of the drain pipe was one review from my voice teacher.

NORRIS: Well, you have, Mr. Rickman, one of those voices that you can catch in about two beats. How important is your voice to the work that you do?

Mr. RICKMAN: Well, it's what I'm stuck with, so it's not like I can go and get another one. And also, I didn't hear what anybody else hears, so it's always a bit of a shock. You know, you - it never goes away. You playing that excerpt just now and I'm thinking, God, how did he get the job?

NORRIS: It sounds like you're not comfortable with your voice?

Mr. RICKMAN: How comfortable are you with yours?

NORRIS: Well, it's - I've grown more comfortable. The problem is I sounded like this when I was about 6. So I…

Mr. RICKMAN: Well, you sounded like a radio interview?

NORRIS: No. I sounded I had a very deep voice. I have…

NORRIS: I have an 8-year-old at home was very cute voice. So I've…

NORRIS: You want to know what really happens?

NORRIS: No, the kids look at you and say, that's not radio voice.

NORRIS: Well, Alan Rickman, it's been a pleasure to talk to you.

NORRIS: Alan Rickman played Judge Turpin in "Sweeney Todd." You can see clips from the movie and hear more of Rickman singing with the demon barber Johnny Depp at npr.org.