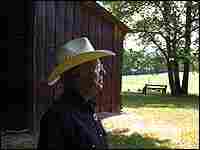 Born in 1927 in Henegar, Ala., Charlie Louvin began his career singing with brother Ira, singing gospel-inspired country music in the '50s and '60s. The pair toured with an as-yet-undiscovered Elvis Presley, and influenced the likes of Emmylou Harris, Elvis Costello and The Byrds.

Bridging the musical gap between the Delmore Brothers and the Everly Brothers, the Louvins appeared on the Grand Ole Opry several rimes in the early '50s, became official members in 1955, and scored numerous country hits along the way. As the Louvins' popularity waned and Ira's troubles with alcohol made their relationship more volatile, the brothers split up in 1964, the year before Ira died in a car accident.

In 2001, the Louvin Brothers were inducted into the Country Music Hall of Fame; not too long afterward, a tribute album titled Livin' Lovin' Losin': Songs of the Louvin Brothers featured the likes of Dolly Parton, Linda Ronstadt, James Taylor and Emmylou Harris.

This year, Charlie Louvin released his first studio album in more than 10 years: The self-titled disc contains reworked versions of Louvin's songs and one original, the self-explanatorily titled "Ira." The album features guest vocals from a wide variety of big names, including Elvis Costello and Wilco's Jeff Tweedy. Now on a national tour, Louvin will spend the summer making special appearances in honor of his 80th birthday.