Accessibility links
2007 a Mixed Bag of Hope, Pain for Oprah Last year was an active one for media mogul and philanthropist Oprah Winfrey. Winfrey made headlines for the opening of her school for girls in South Africa, her support of Sen. Barack Obama for president and her role in producing the film, The Great Debaters.

Listen
2007 a Mixed Bag of Hope, Pain for Oprah 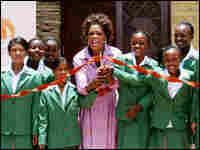 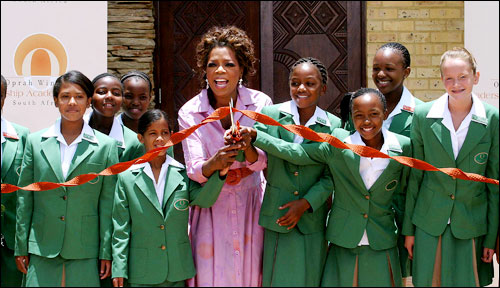 In January 2007, the Oprah Winfrey Leadership Academy for Girls in South Africa opened. 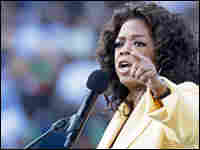 By any standard, 2007 was a big year for Oprah Winfrey. The queen of daytime talk and media mogul made a series of headlines for a variety of reasons — most notably, philanthropy, scandal, political involvement and contributions to the big screen.

The billionaire philanthropist began the year with the opening of a new, state-of-the-art academy for girls in South Africa. But the inspiration surrounding the venture was later tainted amid allegations of abuse at the school.

With the record-breaking success of her daytime hub, "The Oprah Winfrey Show," the former television news anchor is known for her unique ability to substantially boost the marketability of products, books and talent.

Winfrey boldly threw her support behind Sen. Barack Obama, a Democrat from Illinois, for president. To underscore her support, the friend and constituent of the senator hosted an A-list fundraiser. She recently joined Obama on the campaign trail in hopes of influencing voters with her celebrity appeal.

Her latest endeavor was rewarded with a nod from the Hollywood Foreign Press Association. The film The Great Debaters, produced in-part by Winfrey's Harpo Productions, was nominated for a Golden Globe Award.

Juliet Walker is a professor of history at the University of Texas, where she studies the history of black businesses. She also taught a course on Winfrey at the University of Illinois. In the final edition of the program's "Fascinating in '07" series, Walker discusses Winfrey's year of accomplishment and conflict, and the possibility of new endeavors in 2008.

Written and produced for the Web by Lee Hill.