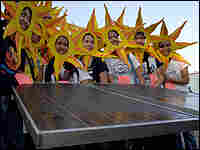 People who want to counterbalance the amount of carbon they emit are buying "carbon offsets." These offsets are used by companies to invest in renewable energy sources, such as solar. Here, solar advocates in Manila participate in a recent parade calling on the government to support more renewable energy. Jay Directo/AFP/Getty Images hide caption

Checking Up on Your Offsets

Some liken carbon offsetting to the now-defunct practice of buying indulgences for your sins from the Pope. It means paying someone else to reduce their carbon emissions so you don't have to cut your own.

The problem is, in this market, nobody is in charge. So when you pay a carbon broker a few hundred dollars to help pay for a solar panel installation in Guatemala, or to plant trees (trees absorb CO2 from the air) in Africa, who is to know if it really gets done? Or, if it does, that the project really reduces all the carbon it promises?

Consumers have to do their own checking. One place to go is Clean Air-Cool Planet, which published a consumer guide that lists carbon offset purveyors with good street cred, as well as interesting factoids.

For instance, a ton of CO2, or its equivalent in other greenhouse gases, is emitted every 60 days from the typical American household. Or consider this: You can eliminate a ton of CO2 by replacing 145 SUVs with hybrid cars.

Another source of consumer information can be found at the Tufts University Climate Initiative.

Figuring Out Your Carbon Footprint

If you are a business or institution with a more complicated carbon "footprint," you can find out how to measure your "print" by consulting any number of businesses that will measure your emissions.

If you want to make sure they do a good job, you can consult carbon inventory protocols created by the World Resources Institute in Washington, D.C. And a Swiss organization has published the international gold standard on measuring footprints. They are named, appropriately, "The Gold Standard."

The business of offsetting is growing fast and a lot of the offsetting outfits measure emissions and price their offsets differently. Some states are considering rules, but the U.S. government is still way behind Europe in guaranteeing that carbon reductions are what they are advertised to be. Until the U.S. government decides what to do, it's caveat emptor on carbon. —Christopher Joyce

There is something new to feel guilty about: carbon.

This new form of remorse is found among people who think that their lifestyle — driving, plane trips or maybe just leaf-blowing — adds too much climate-warming carbon dioxide to the air.

The guilty can now buy something called a "carbon offset." Essentially, you pay someone else to reduce or "offset" carbon emissions equal to your own.

It's a booming new trade, but the federal government is worried that consumers are getting ripped off. The Federal Trade Commission has announced it will investigate the offset business.

For the consumer, buying an offset is pretty straightforward. You go to a broker and pay a few bucks for every ton of CO2 you want to offset. The average amount each American adds to the air is about 20 tons annually.

The broker promises that your money will pay for a project somewhere that will reduce carbon emissions, say, by growing trees that soak up that CO2 or building a solar energy plant.

Pankaj Bhatia of the World Resources Institute, an environmental think tank, says the business is hot. In fact, trade in this offset market is figured to be about $100 million a year and growing fast.

Bhatia's job is to assess carbon footprints — how much carbon you or your business emits. He says he's been very busy.

"Today, I got a phone call from a group that is managing concerts," he says, "and they wanted to know how they could quantify emissions from the transportation by helicopters of their equipment." The concert promoters wanted to buy offsets to neutralize the CO2 their concert produced.

How Much and For What?

But how do people know they are getting what they are paying for? After all, this is a market that trades in a gas, or more accurately, units of a gas that are not produced.

In the United States, the trading is voluntary and nobody is in charge. That worries people whose job it is to protect consumers.

"Our concern is that because these claims are very hard to substantiate and consumers can't easily tell they're getting what they pay for, there is the real possibility of fraud in this market," says Jim Kohm of the FTC's enforcement division.

Kohm says he does not know yet if there is much fraudulent carbon trading. But he is suspicious. "There's been an explosion in green marketing," he says. "There are claims that we didn't see in the market 10 years ago. Carbon offsets are one of those new claims."

There is a raft of new "carbon-neutral" products. For instance, there are potato chips and rock concerts that are advertised as "clean" because their makers or sponsors have bought offsets to counterbalance their emissions.

What the FTC Is Looking For

One of the things the FTC will investigate is "double selling," Kohm says. "So, for example, if I have solar panels on top of my store and then I sell somebody else the right to claim that carbon scrubbing, I can't then claim the carbon scrubbing for myself, as well."

"And if somebody were selling that two or three times, then that would be a deceptive practice that the FTC would need to take action on."

Another hangup is whether the carbon savings you are buying would have happened anyway. For example, what if a company cuts back on the electricity it uses simply to save money? Can that company then claim it has created an offset and then sell it? Climate experts say no. The offset market, they say, is meant to pay for carbon reductions that would not have happened otherwise.

Some environmental groups say that instead of buying carbon offsets, Americans should do the hard work themselves: use less electricity, switch from coal to wind power, drive less.

But Erik Carlson of Carbonfund, a company that trades in offsets, says it doesn't really matter who cuts carbon, who pays for those cuts, or who profits. "We need a 70 percent or so reduction in emissions," Carlson says. "And, in fact, that's all the planet actually cares about. It doesn't care about methane versus electricity versus this versus coal versus whatever."

But the FTC says it does care about consumers and whether they are getting what they pay for. The commission will hold its first public hearing on offset trading on Jan. 8 in Washington, D.C.