Tchaikovsky's 'The Queen of Spades'

Tchaikovsky's 'The Queen of Spades' 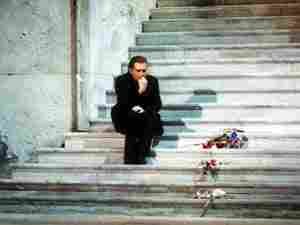 Peter Ilyitch Tchaikovsky's The Queen of Spades is a first-rate example of great literature that's further enlightened when set to great music.

The opera is based on a groundbreaking story by Alexander Pushkin. In it, he wrote that "two obsessions can no more exist in the same mind than two bodies can exist in the same space." If you doubt that statement, or think it's for the best, just read the story — or have a listen to Tchaikovsky's bleak, operatic version of the tale. Then think again.

Pushkin's unfortunate hero is a fellow called Hermann, who seems to have a dysfunctional soul. He observes the social lives of his friends, but stays to himself and won't participate. When a beautiful woman offers him love and companionship, he brutally exploits her for personal gain. In short, Pushkin's Hermann isn't exactly a barrel of laughs. Still, his ultimate fate does seem like a natural byproduct of his flawed personality.

Tchaikovsky's take on his story is every bit as grim as the original — and maybe grimmer, thanks to an extra layer of sentiment. In the opera, Hermann isn't quite such a cold fish — at least not at first. When he meets Lisa the two instantly fall in love, and he's overjoyed. But that love gets tangled up with obsessive greed and, in a way, the opera becomes even more tragic than Pushkin's story. Tchaikovsky gives Hermann every chance to live a meaningful and satisfying life — which in turn makes his self-destruction feel wildly irrational and sadly unnecessary.

On World of Opera, host Lisa Simeone brings us a production of The Queen of Spades from one of the world's great musical venues, the Vienna State Opera, with renowned tenor Neil Shicoff starring as Hermann.

The Story of 'The Queen of Spades' 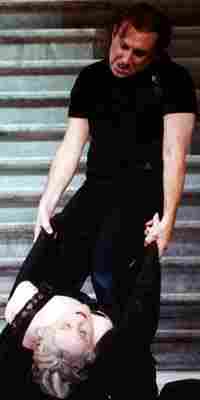 ACT ONE: The opera is set in 18th-century St. Petersburg, and the first scene is in the city's Summer Garden. Three Russian soldiers are talking about last night's card game — and about their friend Hermann, who watched the game but refused to join in.

Hermann arrives and says he's in love with a woman he has never met; he has only watched her from a distance. A rich prince named Yeletsky announces his engagement to a young woman named Lisa, the granddaughter of an aging Countess. When Lisa and the Countess join Yeletsky, Hermann discovers that Lisa is the woman he has fallen for from afar.

Yeletsky and the two women leave and Tomsky, one of Hermann's friends, tells the Countess' story. When she was young, she was a rabble-rouser in the casinos of Paris. Once, after she lost a bundle playing cards, a mysterious man offered her the secret to winning big at the tables, in exchange for certain favors. The secret was a special sequence of three cards. She later shared it with her husband and with a young lover. But the Countess was warned that when a third man asked for it, she would die.

A storm comes up, and Hermann is left alone in the garden. He decides that the Countess' secret to winning at cards is also his secret to winning Lisa. She'd never accept him as he is — he's too poor. But maybe, if he wins enough money, he can also win Lisa's heart.

In the second scene, Lisa is in her room with friends. Their singing disturbs the Countess, so the friends leave and Lisa is alone. We find that her engagement to Yeletsky has been arranged for her, and she's not really in love with him. She's actually attracted to a dark young stranger she's seen in the street near her house. When she looks out, she finds that he's there again, standing under her window. She orders him to leave, but he says he can't live without her. Lisa relents, and before long the two are alone together in her room.

ACT TWO: Lisa and Yeletsky are attending a masked ball honoring the Empress. Hermann is also there, and Lisa has slipped him a note. She wants to meet him when the party is over. Hermann's friends decide to play a trick on him. As he ponders Lisa's note, they hide themselves in the crowd and whisper about Lisa, the Countess and the secret of the three cards. Hermann can't see them. He thinks he's hearing ghosts.

The evening's entertainment is a play about a poor shepherdess who spurns a wealthy suitor in favor of true love with a lowly shepherd. As the play ends, Lisa finds Hermann and gives him a key. With it, he can reach her bedroom by going through the Countess' chambers. Hermann is overjoyed. Now, he thinks, he'll be able to confront the Countess and learn the secret of the three cards, then find his way to Lisa.

Hermann uses the key and tiptoes into the Countess' apartment. He demands to know the secret, and she refuses to tell him. Desperately, Hermann pulls out a pistol. But when he threatens the old woman at gunpoint, she goes into shock and dies.

The commotion wakes Lisa, who rushes into the room. Hermann tries to explain, but Lisa won't listen. She's convinced that Hermann never really loved her — that he has simply used her to get to her grandmother and learn the secret of the cards. She breaks down in tears and orders him to leave.

ACT THREE: Hermann is alone in his room, reading a letter from Lisa. In it, she admits that she is still in love with him and says she no longer thinks he killed her grandmother deliberately. She wants to meet him, late that night by a canal.

When the opera began, that would have been enough for Hermann — Lisa was all he wanted. Now things have changed. He's also obsessed with learning the secret of the cards, and that secret is quickly becoming his only obsession.

In the shadows of his dark room, he thinks he sees the Countess' ghost, and the ghost tells him the secret. She says the winning card sequence is 3, 7, ace. But there's a catch. The ghost says the secret will work only if he uses his winnings to marry Lisa.

In the next scene, Lisa is waiting by the canal. When Hermann doesn't arrive on time, she again questions his love for her. When he finally does appear, at midnight, they reaffirm their feelings and all seems well. Then Hermann says they must go to the casino, so he can win his fortune. Lisa realizes that his obsession for the cards is stronger than his love for her. She tries to stop him, but he pushes her aside and leaves. Feeling that Hermann can never truly love her, Lisa steps off into the canal and drowns.

In the final scene Hermann arrives at the casino and begins placing huge bets on a simple game — predicting which single card will turn up next. Using the Countess' secret sequence he bets on 3 and wins. He lets the wager ride, bets on 7 and wins again. But when he leaves those winnings on the table and bets on the ace, the dealer turns up the Queen of Spades. As he stares at it, he sees the Countess' ghost on its face. She sneers at him and winks. Hermann cries out in horror and stabs himself. As he lies bleeding on the floor, he calls out for Lisa and dies.