Accessibility links
'Bliss' Follows Globetrotting Grump's Search for Joy After 10 years of reporting on the troubles of foreign countries, NPR correspondent Eric Weiner decided to go in search of some of the happiest places on Earth. He chronicles his quest in The Geography of Bliss.

The Geography of Bliss: One Grump's Search for the Happiest Places in the World 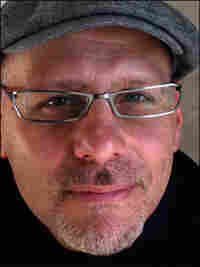 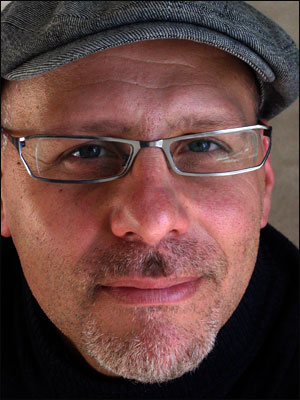 Since writing The Geography of Bliss, Eric Weiner says, "I am happier — but still grumpy."

As a foreign correspondent for NPR, Eric Weiner spent more than 10 years reporting on problems overseas, such as suicide bombings in Jerusalem and student suicides in Tokyo. Then he became intrigued with finding the places in the world where people are reportedly the happiest — and learning why.

He chronicled his travels in The Geography of Bliss: One Grump's Search for the Happiest Places in the World.

Weiner says finding happiness hasn't always been a goal for the masses.

"Happiness went from being this glorious benefit bestowed on the fortunate few to something that each one of us expects to obtain, and expectations and happiness are not necessarily related. They often go in opposite directions," Weiner tells Scott Simon.

Weiner started his search at what he describes as a "rather unhappy-looking office building" in Rotterdam that houses the World Database of Happiness, where much of the data from the "burgeoning science of happiness" is compiled. Then, he traveled to several countries to try to create an "atlas of bliss." One of them was Switzerland.

So why are the Swiss so happy? Perhaps because things there work well, Weiner says.

"The trains really do run on time; the streets are clean," he says.

But Weiner says he believes there are other reasons why the Swiss rate high on the happiness scale.

"One is that they do vote a lot. They vote seven or eight times a year in public referendum, and they have a say in what happens. And having a say in your life is an important ingredient in happiness," he says.

They also have a healthy attitude toward money, he adds.

In another stop on the happiness search, Weiner visited Bhutan, where he met a man with this rather unexpected advice: To be happy, you need to set aside a few minutes a day to think about death.

Another theory that stuck with him is that happiness isn't personal — it's relational. "I know that sounds a bit corny and a bit hackneyed, but it's true," he says.

Since writing the book, Weiner says, "I am happier — but still grumpy."

Weiner is a correspondent for NPR.org.

Excerpt: 'The Geography of Bliss' 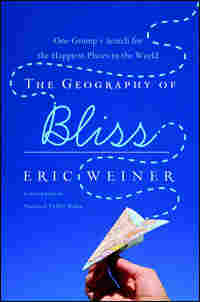 From the chapter "Iceland: Happiness Is Failure":

I arrive to blowing snow and an inky black sky as dark and vast as outer space. It is 10:00 a.m.

"When does the sun rise?" I ask the nice man at reception.

He looks at me like I'm daft. When he replies, he speaks slowly and deliberately.

"The sun? Oh, I don't think you'll be seeing the sun today."

He says this like it's an obvious fact, as in, "Oh, it's Sunday, so of course the shops are closed today."

Not see the sun? I don't like the way this sounds. In the past, the sun has always been there for me, the one celestial body I could count on. Unlike Pluto, which for decades led me to believe it was an actual planet when the whole time it was really only a dwarf planet.

I had plenty of time to ponder celestial bodies on the long flight from Miami. Flying from Florida to Iceland in the dead of winter is at best counterintuitive and at worst sheer lunacy. My body sensed this before the rest of me. It knew something was wrong, that some violation of nature was taking place, and expressed its displeasure by twitching and flatulating more than usual.

I have my reasons, though. According to Ruut Veenhoven's database of happiness, Iceland consistently ranks as one of the happiest countries in the world. In some surveys, it ranks number one.

When I first saw the data, I had the same reaction you're probably having now. Iceland? As in land of ice? As in cold and dark and teetering on the edge of the map as if it might fall off at any moment? Yes, that Iceland.

As for the winter part, I figured anyone could be happy during the Icelandic summers, when the sun shines at midnight and the weather turns "pleasantly not cold," as one Icelander put it. But the winter, yes, the cold, dark winter, that was the real test of Icelandic happiness.

I find myself pondering darkness, something I admit I haven't pondered much in the past. For me, as I suspect for most people, dark has always been dark. What is there to ponder? In fact, there are as many varieties of darkness as there are types of landscapes or clouds. Some darkness is hard and unforgiving. Other darkness is softened by the glow of the moon or distant city lights. Then there is the expectant darkness of 5:00 a.m., when we sense though can't yet see the coming dawn.

Icelandic darkness is in a category of its own, a stingy darkness that reveals nothing and, if it could talk, would probably do so with a thick New York accent: "Yo, ya gotta problem wit Mista Darkness, bub?" It is a darkness that for several months each year engulfs Iceland, smothers it, encases it, like one of those head-to-toe burkas worn by some Muslim women. Just as black and just as confining.

How, I wonder, staring out my hotel window into black nothingness, can Icelanders possibly be happy living under this veil of darkness? I've always associated happy places with palm trees and beaches and blue drinks and, of course, swim-up bars. That's paradise, right? The global travel industry certainly wants us to think so. Bliss, the ads tell us, lies someplace else, and that someplace else is sunny and eighty degrees. Always. Our language, too, reflects the palm-tree bias. Happy people have a sunny disposition and always look on the bright side of life. Unhappy people possess dark souls and black bile.

But the number crunchers at the World Database of Happiness say that, once again, we've got it wrong. Climate matters, but not the way we think. All things considered, colder is happier. The implications of this are tremendous. Maybe we should all be vacationing in Iceland, not the Caribbean. And global warming takes on added significance. Not only does it threaten to ravage ecosystems, flood coastal cities, and possibly end life on earth, it's also likely to seriously bum us out. This might be the most inconvenient truth of all.

Theories abound as to why cold or temperate climes produce happier people than warm, tropical ones. My favorite theory is one I call the Get-Along-or-Die Theory. In warm places, this theory states, life is too easy; your next meal simply falls from a coconut tree. Cooperation with others is optional. In colder places, though, cooperation is mandatory. Everyone must work together to ensure a good harvest or a hearty haul of cod. Or everyone dies. Together.

Necessity may be the mother of invention, but interdependence is the mother of affection. We humans need one another, so we cooperate — for purely selfish reasons at first. At some point, though, the needing fades and all that remains is the cooperation. We help other people because we can, or because it makes us feel good, not because we're counting on some future payback. There is a word for this: love.

Excerpted from The Geography of Bliss by Eric Weiner. Reprinted with permission from Hachette Book Group, USA. 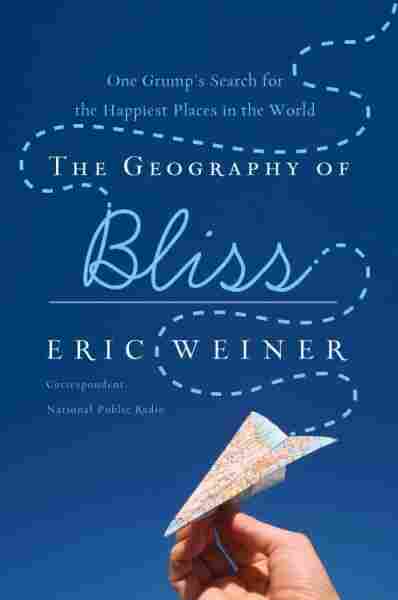 The Geography of Bliss

One Grump's Search for the Happiest Places in the World