Accessibility links
Verdi's 'Attila' In the colorful drama Attila, Giuseppe Verdi used a 5th-century story to make a pointed statement about the politics of his own time. It's performed at the legendary Concertgebouw, in Amsterdam.

In the Act One aria Mentre gonfiarsi l'anima, Attila awakes from a nightmare in which a mysterious old man blocks his path to Rome. It leaves him frightened at first, then increasingly resolute.

'Attila' on World of Opera 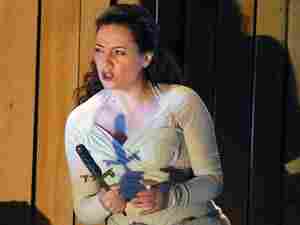 At first glance, Verdi's Attila, an opera about Attila the Hun, might seem like a theatrical relative of "Springtime for Hitler," the play within a play that Mel Brooks created for The Producers. Both the opera and the Brooks' spoof seem to be attempting something truly outlandish, by turning the life and times of a notorious historical figure into popular, musical entertainment.

The two also share one other key element — deceptive intent.

In The Producers, the main characters bill their Hitler musical as the next great Broadway sensation, while they secretly intend it to flop disastrously. Verdi's opera was billed as a historical drama depicting ancient events, while in fact it was a timely expression of one of the hottest political issues of the day — the push for Italian independence.

In 19th-century Italy, the movement was known as the Risorgimento, or Resurgence. The Italian peninsula had long been divided, and ruled by the Austrian empire. The goal of the Risorgimento was to expel the Austrian rulers and unify Italy under one government. Verdi was one of the movement's leading advocates and his many patriotic operas made him a national hero.

Verdi did have government censors to deal with, of course. He couldn't write dramas that actually portrayed current events. So, in operas like Attila, Nabucco and I Lombardi, he evaded the censors by taking contemporary, revolutionary sentiments, and disguising them within historical contexts — depicting the Mongol invasion, the tyranny of Nebuchadnezzar and the gallantry of the Crusades.

Not surprisingly, these operas take a few liberties with actual history. The real Attila may not have been the reflective, romantic sort of guy Verdi made of him. Still, when it came to the history being made in his own time, Verdi struck just the right chord — depicting a noble struggle against invading hordes-- and his music helped to inspire a real-life revolution.

On World of Opera, host Lisa Simeone presents Verdi's Attila in a performance from one of music's most storied venues, the Concertgebouw in Amsterdam. The stars are soprano Hasmik Papian as Odabella, the woman who both seduces and destroys the fearsome Hun, and the powerful bass Ildar Abdrazakov as Attila.

The Story of 'Attila' 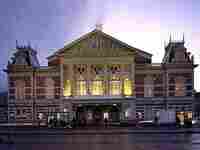 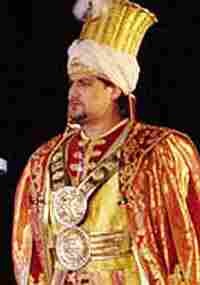 Bass Ildar Abdrazakov plays Attila, a ruthless conqueror who falls in love with an enemy, and is murdered for his trouble. hide caption

PROLOGUE: As the action begins, the Huns are celebrating their victory in the piazza of Aquileia. With the city still burning around them, Attila is presented with a group of captive female fighters. These women have been spared because of their courage and perhaps, their beauty. Their leader is the defiant Odabella. Attila is smitten, and presents Odabella with his own sword. She puts it on her belt, and pretends to accept her fate as one of his concubines. Secretly, though, Odabella is plotting revenge.

The Roman general Ezio arrives on the scene and proposes a deal. Ezio says if he can have Italy, Attila can take the rest of the continent for himself. Attila doesn't go for it, and swears to conquer all of Italy, Rome included.

In the next scene, a young man named Foresto turns up with a small band of men who have survived Attila's attack. Foresto, it seems, is looking for his beloved — Odabella.

ACT ONE: Odabella is still being held captive by Attila, but has no desire to escape; she's decided to kill him instead. In the woods near Attila's camp, Foresto confronts Odabella and accuses her of betraying him and their cause. Eventually, she convinces him that she's still on his side, and they celebrate their reunion.

Later, Attila tells Uldino, one of his slaves, about a nightmare he's just had. In the dream, he was approaching the gates of Rome when an old man suddenly appeared, grabbed him, and told him he would never take the city. In the aria "Mentre gonfiarsi l'anima," Attila admits to self-doubt — the vision has terrified him. But he gathers himself and calls his troops to arms.

Just as the trumpets begin to sound, Attila hears a chorus approaching. A procession of women and children comes down from the hills, led by Pope Leo. Attila immediately recognizes him as the man in his dream. As the chorus sings, Attila kneels at Leo's feet and swears to give up his attack on Rome.

ACT TWO: Ezio and Foresto hatch a plot to destroy Attila. At Attila's camp, the torches are blown out by a gust of wind. In the darkness, Foresto finds Odabella and tells her he and Ezio have just poisoned Attila's drinking water.

Odabella does want Attila dead, but not that way. She prefers to kill him herself. So Odabella actually warns Attila that he's about to drink poison. Foresto confesses to the attempted murder, and Odabella cleverly convinces Attila to let her mete out Foresto's punishment.

Attila couldn't be more pleased. He thinks he's got a truly fine woman on his hands — both devoted and bloodthirsty. Attila promptly anounces that he'll marry Odabella the very next day. Furthermore, he declares that with Odabella at his side, he has decided to march on Rome after all.

ACT THREE: Foresto is decidedly unhappy with the turn of events. In the woods outside Aquileia, he pouts about Odabella's apparent treachery. The Roman general Ezio arrives, spurring Foresto on to battle. Odabella appears and, one more time, she explains to Foresto that she's only waiting for the right opportunity to kill Attila — just like she said she would, back in Act One.

Attila comes looking for his bride, and finds Odabella, Foresto and Ezio all together. Finally, he realizes what's going on. When Roman troops are heard attacking Attila's army, Foresto tries to attack Attila. But Odabella wants the hateful Hun for herself. She grabs her sword — the same one Attila gave her — and stabs him to death. She and Foresto embrace, and the people sing a prayer of thanks for their salvation from the barbarian hordes.