Accessibility links
Wagner's 'Rienzi' With Rienzi Wagner took the extravagant style of French Grand Opera and made it his own, in the process creating a spectacular drama that's also the longest opera he ever composed.

From the Leipzig Opera 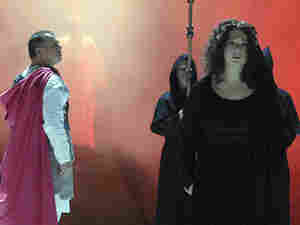 Wagner's stated aim was to create something called a Gesamstkunstwerk, or "total work of art." The idea was to reach beyond traditional opera to achieve a seamless blend of music, drama, literature, visual art and stagecraft. How thoroughly Wagner succeeded in this is a matter of opinion, but he undoubtedly created a style of musical theater that had never been heard before.

In the process, he also created some of the longest works ever to hit the world's opera houses. Together, the four dramas of his Ring cycle last for more than 14 hours. The shortest of them, Das Rheingold, is 2 1/2 hours long — and has no intermission!

Ironically though, Wagner's longest opera is also one of his most traditional. It's the opera featured here, Rienzi, which in its original version clocks in at nearly five hours.

In Rienzi, a young Wagner took on the world of French "Grand Opera," a traditional form that typically featured five acts and as much spectacle as the stage could hold, including ballets, rousing processionals, huge choral numbers and special stage effects. Wagner embraced the tradition enthusiastically, saying that Rienzi should "outdo all previous examples with sumptuous extravagance." In the process he deliberately created an opera that only the largest theaters can hold. It ends with an entire building collapsing on stage, burying the principal characters alive!

On World of Opera, host Lisa Simeone brings us a production of Rienzi from the Leipzig Opera, featuring the historic Gewandhaus Orchestra in the pit. And don't worry — it also happens to be a slimmed down version of the opera, tipping the scales at just over three hours.

The Story of 'Rienzi' 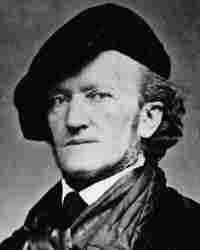 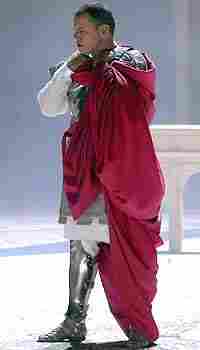 ACT ONE: The action takes place in Rome in the 14th century. At night, on Roman street, the nobleman Paolo Orsini is trying to abduct a woman named Irene — sister of the opera's title character, the popular leader Cola Rienzi. Orsini belongs to one of the city's most powerful families. A rival family headed by Adriano Colonna puts up a fight, and Rienzi himself comes on the scene to break up the brawl. His friends and followers urge him to bring peace to the city by seizing power and imposing order.

In the next scene, Rienzi tells Irene and Adriano that he's determined to avenge his brother, who was murdered by a Colonna. That's inconvenient for Adriano, who is in love with Irene. To make amends for his guilty relative, Adriano pledges his allegiance to Rienzi. In return, he's granted Irene's hand, and the two sing a passionate duet.

A crowd gathers, praising Rienzi as their protector and proclaiming him king. Rienzi refuses the honor. Instead, he says the state should be governed by a senate and that he will serve as Tribune.

ACT TWO: In the great hall of the Capitol, the official Messengers of Peace arrive, heralded by a triumphal song. Dressed in white silk, the Messengers celebrate the success of their peace mission throughout Italy.

Peace is the last thing on the minds of the nobles — in particular the Colonna family and Paolo Orsini. The two families are still at odds, but both want to take power over the city by force, so they conspire against Rienzi and his rule of law. Rienzi then receives the visiting foreign ambassadors and claims for the Roman people the historic right to elect the German emperor.

Next, there's a celebration of the union of ancient and modern Rome. The proceedings are quickly halted when Orsini attacks Rienzi with a dagger, but the assassination attempt is foiled by Rienzi's steel breastplate.

Meanwhile, Steffano Colonna's men have tried to seize the Capitol. The Senators and people are outraged, and demand death for the traitors. Irene and Adriano both plead for Steffano's life. In a gesture of magnanimity, Rienzi pardons all the nobles. Rienzi's clemency is praised by Adriano and Irene. But as the people hail their generous leader, the nobles plot revenge.

ACT THREE: In the ancient Roman forum, the nobles prepare to attack Rienzi. With a resounding battle cry, Rienzi urges the people to take up arms, and leads a grand procession of senators and armed citizens. Adriano is torn between his loyalty to his father, Colonna, and his love for Irene, which led him to support Rienzi.

Adriano begs to be sent as an ambassador to his father. Irene pleads with him to stay and protect her, and he eventually agrees. Irene and the women pray for victory, and Rienzi returns in triumph. Behind him, the bodies of the traitorous nobles Orsini and Colonna are carried in. Adriano curses Rienzi for killing his father, and vows revenge, while the people crown Rienzi with a laurel wreath.

ACT FOUR: In a square in front of Rome's Lateran church, Rienzi's colleagues Baroncelli and Cecco discuss the political situation with a group of citizens. They've supported Rienzi in the past, but they're concerned about his interference in the election of the German emperor. Now, they've learned that the Germans have withdrawn their ambassador from Rome. To complicate things for Rienzi, the new emperor is an ally of the pope, who was a supporter of Colonna. The powerful Cardinal Raimondo has also turned to the pope for protection.

Baroncelli tells a growing crowd of commoners that Rienzi has sought an alliance with the nobles, offering his sister Irene in return. When the crowd demands evidence of this supposed treachery, Adriano affirms Baroncelli's allegation. The conspirators vow to strike at Rienzi during the victory celebration later that day.

When Rienzi arrives for the festivities, Adriano tells the conspiring nobles that he will not assassinate Rienzi while Irene is present. Suddenly, Cardinal Raimondo appears on the steps of the church to proclaim Rienzi's excommunication. When Rienzi's followers desert him, Adriano tries to persuade Irene to abandon Rienzi along with them. She refuses, and remains at her brother's side.

ACT FIVE: Inside the Capitol, Rienzi prays for strength. He tells Irene that he has lost the support of the people. Irene could save herself by going to Adriano, but she refuses to leave Rienzi, and they embrace. Rienzi leaves to do battle with the insurrection, and Adriano enters. As the commotion outside increases, he tries to take Irene with him by force, but she pushes him away and runs out.

In the square in front of the Capitol, the people have cornered Rienzi. Ignoring his pleas, and led by Baroncelli and Cecci, they try to stone him, and then set fire to the Capitol. Retreating inside, Rienzi and Irene stand together on the Capitol balcony. Adriano and the nobles mount an attack, and try to reach Irene. But as Adriano approaches, the building collapses. Adriano, Rienzi and Irene are all buried in the flaming ruins.