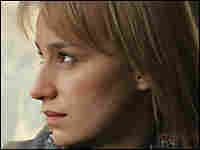 'Gabita and Otilia Pack Their Bags'

4 Months, 3 Weeks and 2 Days is set in Romania in 1987, two years before the dictator Nicolae Ceausescu's violent fall, and is part of director Cristian Mungiu's series, "Tales from the Golden Age." "The Golden Age" was Ceausescu's name for his quarter-century reign, and ten minutes of this movie is enough to tarnish it for all time.

The film unfolds over one long day, which begins with a university student, Otilia, waking up in her dorm, brushing her teeth, bargaining for a pack of black-market cigarettes, and setting off to orchestrate an illegal abortion for her roommate.

That roommate, Gabita, is a pretty and childlike creature who has left many of the logistics to her friend. So in the course of the movie, Otilia must have protracted and humiliating negotiations with sadistically indifferent hotel clerks, a predatory male abortionist, and even her well-off boyfriend, who insists on her presence that evening at his mother's birthday dinner.

Through it all, Otilia's powerlessness is more and more palpable, and as she struggles to keep her focus, the camera stays fastened on her-long, grueling takes in which her dogged persistence becomes increasingly heroic.

4 Months centers on the subjugation of women, but the plight of Otilia and Gabita is also a window on a society in which everyone is stunted, in which fear has metastasized into malignant self-interest. Everyone but Otilia is out for him or herself; everyone has a moral tunnel vision.

Mungiu moves between huge, empty, decrepit buildings, once presumably glorious, and characterless modern apartment towers: It's almost impossible to reconcile the country's past with the present. There's no music-only the thunk of radiators, the echo of shoes on uncarpeted floors, and, unforgettably, the sound of a small object as it bumps down a garbage chute.

As Otilia, Anamaria Marinca is remarkable. There isn't a trace of tremulousness; somehow, the more frozen her face, the more of her soul is bared. You want her not just to survive, but to survive with her humanity intact. You pray for her-you pray for everyone-to transcend the collective venality-or, failing that, to emerge from the Golden Age with the determination to capture it in works of art, as in this great, unsparing film.