Accessibility links
Shrewd, Selfish Scarlett: A Complicated Heroine What business did a young black woman in the Northeast have indulging a fascination with the slave-owning heroine of Gone With the Wind? NPR's Karen Grigsby Bates explains the complicated business of Scarlett fever. 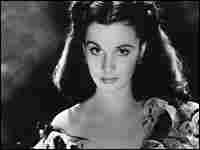 Necessary evils: Whether plotting a conquest at a picnic or engineering a comeback from poverty, Scarlett O'Hara (Vivien Leigh) had no qualms about doing what it took. Hulton Archive/Getty Images hide caption 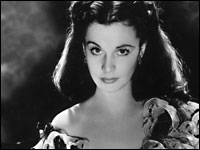 Necessary evils: Whether plotting a conquest at a picnic or engineering a comeback from poverty, Scarlett O'Hara (Vivien Leigh) had no qualms about doing what it took.

One mark of a great character? The imitations she inspires. A short list of sequels and parodies.

Film clips track her journey from frivolous to ruthless — and illustrate the character's appeal.

'Is the Doctor Come?'

'You're Gonna Make Me a New Dress'

'And Don't Call Me Sugar' 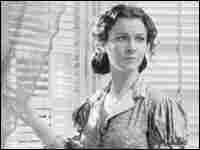 A tough woman in tough times: Scarlett may be (dressed) down, but don't ever count her out. John Kobal Foundation/Hulton Archive/Getty Images hide caption 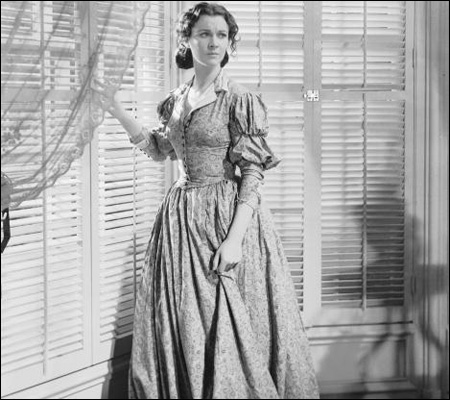 A tough woman in tough times: Scarlett may be (dressed) down, but don't ever count her out. 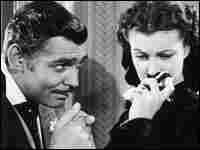 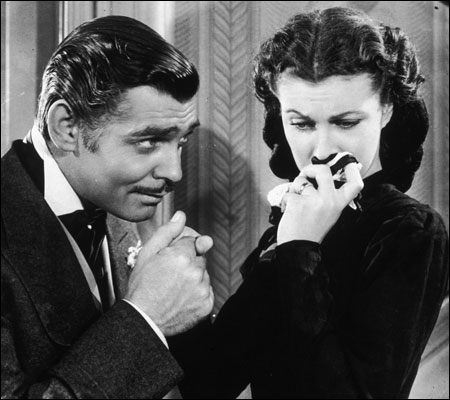 I first read Gone with the Wind in the summer of 1966. At the time, American cities were erupting into flames as black communities protested decades of police brutality. And the Vietnam War was becoming a national obsession.

Me, I was a 15-year-old in New Haven, Conn. My parents were still referring to themselves as Negroes, but I was already calling myself black.

And yet I was also immersed in the mid-19th century South, where another teen was railing against the preoccupation of her day. "War, war war," she'd pout. "It's positively ruined every party this spring! I'm so sick of all this talk about war I could scream!"

Scarlett O'Hara, founding mother of the Me Generation. Frankly, my dear, I found her unabashed self-interest delicious.

My own mother, though, was mystified. Why would her child, who would eventually sport a two-foot wide Afro, be so interested in a plantation belle?

Miles Away, a Kindred Spirit

She couldn't know it, but I wasn't the only black girl who was mesmerized by Scarlett. A thousand miles away, writer Pearl Cleage was growing up in a Detroit household that was Afrocentric before Afrocentric became popular. Her mother, like mine, didn't get the Scarlett attraction either.

"The idea that I could be reading this book about the lives of slave owners just kind of drove my mother crazy," Cleage remembers. "And she really kind of said to me, 'If you're going to read this book, you need to be identifying with Prissy and Mammy, not with Miss Scarlett.'

"Which of course was impossible," Cleage continues. "No little black girl on the West Side of Detroit wants to identify with people who are owned by a little white girl!"

I think Pearl Cleage and I both liked that Scarlett was feisty and stubborn. She allowed herself to be what every nice girl, from her day to ours, was told not to be: selfish. Remember when she and Rhett Butler have just married, after she's alienated some of Georgia's more genteel families with her hard-nosed business dealings? He tells her he'll spend as much as she wants on the new mansion she's planning in Atlanta.

"Oh, Rhett," she laughs. "I want everybody who's been mean to me to be pea-green with envy!"

What a brat! But you've got to love her insistence on payback — it's kind of like flipping off the Mean Girls' table in the school lunchroom.

Proto-Feminist, or Symbol of Something Uglier?

The bravery of the heroine that Margaret Mitchell originally named Pansy O'Hara — the author's publisher asked her to change the name — was enticing to many girls in the pre-feminist '60s. Back then, we were still expected to defer to boys, to look nice and stay sweet. Scarlett wasn't having it. Remember, this is a girl who killed a Yankee.

But while she might symbolize resilience for some, for others — especially for some Southern women who are black — Scarlett is something else altogether.

Novelist and Georgia native Tina McElroy Ansa says the Scarlett everyone else admires leaves her cold, because her character is rooted in an assumption of racial superiority.

"There is a possibility that people just take the best parts of her character to identify with," Ansa says. "For me, it was very difficult to take the best and let the rest ride. ... Her higher place in society meant that mine had to be lower."

As both the novel and the movie of Gone with the Wind make clear, "protecting the sanctity" of white womanhood helped lead to the birth of the Ku Klux Klan. Ansa believes there's a lot of unspoken "stuff" to work through before honest discussions about race can occur.

"And I think Scarlett O'Hara, iconic figure, kind of stands in the way of all that," she says.

She's right. Don't kid yourself: The specter of who owned whom, and its nasty aftereffects, will be with us for a long, long time in this country. My adult self still likes Scarlett, but I understand that Missy is part of a painful, complicated history we're still trying to work out.

And yet some aspects of Scarlett transcend race. Pearl Cleage argues, for instance, that civil rights icon Fannie Lou Hamer, a black Mississippi sharecropper who insisted on her right to vote, is an inheritor of Scarlett's ambition.

"Fannie Lou Hamer is as much a quintessential Southern woman as Scarlett O' Hara," Cleage says, "because they both stepped forward and said 'No — I'm not going to do what you want me to do, because I'm free.' And I think that's the thing we like about Scarlett O' Hara, is she was always determined to be free."

Margaret Mitchell once said that Gone with the Wind's overriding theme could be boiled down to one word: "survival."

Love her or loathe her, Scarlett O'Hara is a survivor. She has that ability to struggle through trauma to reach tomorrow.

Which, of course, is another day.

As Gone with the Wind draws to a close, Rhett Butler walks out, leaving Scarlett heartbroken and vowing to win him back. "Tomorrow is another day," she promises. But then what? Did Scarlett ever get her man?

Alas, for die-hard fans pining for additional installments from Margaret Mitchell, tomorrow never came; the author passed away in 1949, having steadfastly refused to pen a sequel.

Luckily for Scarlett-lovers (and -haters), the story doesn't end there. Gone With the Wind and its indomitable heroine have begotten a slew of sequels and parodies. Most famous among them: The inspired Carol Burnett take-off Went with the Wind.