Accessibility links
Medeski Martin and Wood: Introducing Jazz With a frenzied organ groove, the song repeatedly stops and starts on a dime, like a dance-crazy game of musical chairs. It's from an album of music for kids, but adults should appreciate it, too.

'Where's the Music?' by Medeski Martin and Wood

'Where's the Music?' by Medeski Martin and Wood 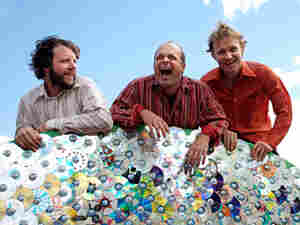 In recent years, jazz has struggled to expand its audience, in part because jazz introduced to children rarely bears a resemblance to music heard on the radio. Of course, it doesn't help that music deemed "suitable for kids" often doesn't challenge or inspire the way it could. With those hurdles in place, Medeski Martin & Wood's members set out to record an album they could share and enjoy with their own children. In many ways, it's a perfect fit.

The group has already exposed younger generations to Duke Ellington, Jimmy Smith, Charles Mingus, and even Sun Ra or Cecil Taylor by modernizing their styles with elements of rock, hip-hop, and electronica. With a forward-thinking and approachable concoction of dance-ready grooves, memorable melodies, and avant-garde jazz experimentation, the trio found crossover success with music fans who'd never thought to try jazz. So why not try the same for an even younger crowd?

The music on Let's Go Everywhere doesn't stray far from the band's own formula. John Medeski's funky organ swells and Chris Wood's dexterous ostinato bass lines remain intact, as do Billy Martin's hard shuffles and hip-hop beats. But they trade some of their brooding and haunting tendencies for an accessibly lighter sense of humor. The band sounds as playful and loose as ever by accompanying the album's many singers with tons of quirky instruments: plinking thumb pianos, churning harmonium drones, and percussion that rattles, squeaks, and shakes.

While the young folks will surely be drawn to the sing-alongs ("Pirates Don't Take Baths," "On An Airplane"), storytelling ("The Squalb"), and perhaps the lovely lullaby ("We're All Connected"), the music itself stays interesting for parents and longtime MMW fans. On the start-stop frenzy of "Where's the Music?," Medeski's explosive organ groove repeatedly stops and starts on a dime, much like a dance-crazy game of musical chairs. Like the album that spawned it, the track serves as a perfect introduction to jazz — not only for younger kids, but perhaps even adults who are unsure where to dive in.