Accessibility links
Steve Reich: 'Music for 18 (Cornfed) Musicians' Grand Valley State University is not known for its music department. But the New Music Ensemble at the small Midwestern college has impressed the critics and the composer with a new recording of Steve Reich's Music for 18 Musicians.

The composer talks with Liane Hansen 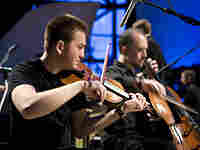 The GVSU New Music Ensemble's hard work paid off in a performance at the Bang on a Can Festival in New York City, as well as a new recording. Stephanie Berger hide caption 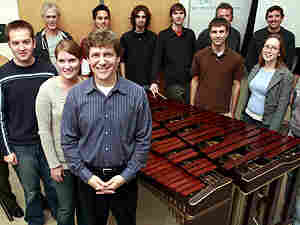 Members of the New Music Ensemble at Grand Valley State University (led by Bill Ryan, front) prepared for more than a year for their recording of Steve Reich's Music for 18 Musicians. courtesy of GVSU hide caption

At almost an hour in length, the piece unfolds like a slowly shifting dream, with sections of repeated material ebbing and flowing around a cycle of 11 chords. It's scored for strings, percussion, woodwinds and voices, and takes tremendous concentration on the part of the 18 players. To this day, the work is mainly performed by the composer and his loyal group of musicians.

It took courage, then, for a group of players at a small Midwestern college (not known for its music department) to mount a performance of Music for 18 Musicians — not just for their own amusement, but to play at the high-profile Bang on a Can Festival in New York City.

Under the direction of Bill Ryan, the New Music Ensemble at Grand Valley State University — amid the cornfields of western Michigan — practiced the music for nearly a year. Ryan recalls a mixed response when he first announced the idea to his students.

"A few people couldn't wait until I finished my sentence before they wanted to sign up; they knew the piece. But a few didn't know who Steve Reich was." Rehearsals were tough going, initially, but Ryan says he saw a breakthrough eventually.

"We had been looking at the work for about six weeks, and there were moments in the rehearsal where I started to see the players come out of their own parts — relaxing, looking around, using their ears, listening to parts that were happening across the room. I knew then that our concert would be fine."

Ryan and five members of the ensemble flew to New York to watch Reich's ensemble perform the piece and strategize with them about how to play it.

All the hard work came to fruition last spring, with Ryan and his ensemble playing Music for 18 Musicians early in the morning at the Winter Garden Atrium.

"It was magical to see my ensemble in that environment," Ryan says. "Here we are, this group from the middle of the Midwest that no one had ever heard of, playing at this significant new-music event. It was just glorious to see the sun come up as we were finishing the piece."

Their performance charmed the critics. Alex Ross of The New Yorker wrote the group "succeeded in holding 400 listeners transfixed at 4 a.m."

Ryan and his New Music Ensemble have documented their long journey into Reich's Music for 18 Musicians with a new surround-sound recording of the piece.