Just as Audra McDonald's Houston double bill bridged the gap between Broadway and the opera house, her 2006 album Build a Bridge links the musical worlds of Broadway and the pop song. Tunes on the album include Nellie McKay's "I Wanna Get Married," and "Wonderful You" by Jane Kelly Williams.

I Wanna Get Married 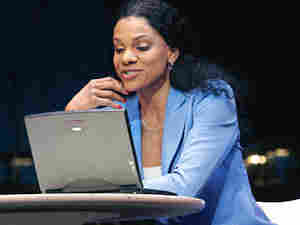 In 2006, Broadway star Audra McDonald released an album called Build a Bridge — meant to join the musical worlds of Broadway and pop songs. That same year, McDonald built another musical bridge when, in one evening onstage, she made a vivid connection between musical theater and the opera house.

In the spring of 2006 McDonald took the stage at Houston Grand Opera for a solo spectacular — a double bill of one-woman operas: the world premiere of Send (who are you? I love you), by Michael John LaChiusa, followed by Francis Poulenc's anguished drama La Voix Humaine — or The Human Voice.

In their way, both operas are stories of high-tech love. The Human Voice, composed in 1958, presents a single character who endures an entire act of desperation and heartache, while her lover dumps her over the phone. LaChiusa's Send ... brings us a young woman eager to begin a brand new relationship with a man she knows only from the internet. And in each half of this operatic tour de force, McDonald's voice is the only one we hear.

Composer Michael John LaChiusa is best known for his work on Broadway. His musical Marie Christine was also a vehicle for McDonald, whom he calls an "astounding" performer.

"Audra sings in character," LaChiusa says. "She understands that every note she sings must sound as though as it were being created in the moment. In these days of faux performances, Audra is an anomaly."

In LaChiusa's opera, McDonald's character fantasizes freely about her internet lover, all the while waiting anxiously for a phone call that comes only as the opera is ending. In The Human Voice, her character's phone rings right away, and brings her nothing but bad news. Together, McDonald's performances in the two operas create a vivid, emotional whirlwind.

On World of Opera, host Lisa Simeone presents this brilliant one-woman show from the stage of the Brown Theater, at downtown Houston's Wortham Theater Center. 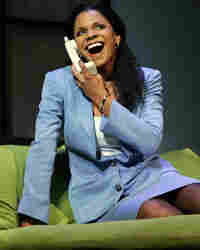 As the single character in LaChiusa's Send (who are you? I love you?, Audra McDonald waits through the entire opera until her phone finally rings. Brett Coomer/Houston Grand Opera hide caption 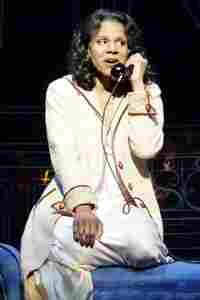 Send (who are you? I love you): A professional woman, 30-something in age, has posted an online personal ad, complete with photo, seeking a "single professional male who is straight and sure." Privately, we hear that she's hoping for, "someone who might think in terms of 'us.'"

Through the ad, she meets a man online. After exchanging e-mail messages, she's given him her telephone number and has taken the day off work, hoping that he'll call. As the opera begins, the phone has yet to ring — and she's willing to wait just five more minutes before giving up on the guy. She blames this "pathetic" situation on her friend Martha, who apparently has a French accent and seems to be the composer's nod to Poulenc's The Human Voice — in which the single, lovelorn character has a friend with the same name.

As she waits, the woman thinks about writing to the man again, but doesn't want to seem desperate. With the phone still silent, she ponders going online to retouch her picture, and wonders if the photo he sent might be a fake.

As she continues to wait, she begins to speculate on what will happen when the call finally comes — about when they'll meet, and where, all the things they'll have in common, and how attractive he'll find her. She conjectures a first date that progresses to further meetings, a relationship proceeding in fits and starts, then a true romance that changes both their lives. She imagines their wedding, a honeymoon in Paris, a happy family, a few bumps in the road, some heartache, and ultimately, old age and lifelong devotion.

But that's all just in her mind when the phone finally rings, she answers it tentatively, and the opera ends.

The Human Voice: Based on a 1932 play Jean Cocteau (who also wrote the libretto), Poulenc's opera is the stark depiction of a woman overcome by loneliness and desperation. We listen in as she crumbles, in a 45-minute telephone conversation with her ex-lover, who calls to say a final goodbye.

The young woman is never named. Poulenc and Cocteau called her simply, "Elle," which in French means "she." We hear only her end of the conversation — cries of desperation punctuated by soft recollections of the lovers' life together.

Her monologue also contains an element of black humor. Poulenc set his drama in the 1950s, when telephone service still involved party lines. Elle shares her phone line with somebody else, and she sometimes needs the assistance of operators. So, as she clings desperately to a lost relationship, her pleadings are frequently interrupted by the staccato of rings and re-dialings, and angry exchanges with the operator. Plus, her lover periodically hangs up on her in anger — or exhaustion — prompting one or the other of them to call back. On one of those call-backs she discovers that he wasn't calling her from home, and had lied about it.

Through it all, Elle insists that she's coping well, but we eventually learn that as the relationship became strained, she once attempted suicide. Finally, with the connection severed one last time, Elle wraps the telephone cord around her neck and curls up in bed, murmuring "I love you" into the silent receiver.