Dinaw Mengestu Reads from the Book

Dinaw Mengestu Reads from the Book 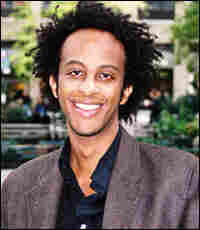 Dinaw Mengestu was born in Addis Ababa, Ethiopia, in 1978. In 1980, he came to the United States with his mother and sister, joining his father, who had fled the communist revolution in Ethiopia two years before. The Beautiful Things that Heaven Bears is his first novel. Blair Fethers hide caption

Getting Inside the Head of the Novel's Main Character

The Experience of Immigrants Who Return to Their Home Countries

Mengestu on Writing His First Novel

"How was I supposed to live in America when I had never really left Ethiopia?" questions Sepha Stephanos, the protagonist of The Beautiful Things That Heaven Bears. That isolation and frustation of immigrant life is thoughtfully portrayed in the award-winning fictional debut from Dinaw Mengestu.

The story of an Ethiopian immigrant who fled his country's communist revolution, The Beautiful Things That Heaven Bears follows him nearly two decades later, struggling to live the American dream, with a failing convenience store in a gentrifying Washington, D.C., neighborhood.

Praised by the New York Times Book Review as a "great African novel, a great Washington novel and a great American novel," the book was awarded the Guardian First Book Award in 2007. The National Book Foundation included Mengestu on its list of "5 Under 35" "as someone whose work is particularly promising and exciting."

Mengestu, like his protagonist, was born in Ethiopia, but came to the United States in 1980 at the age of 2, a move that reunited his family after his father had been forced to flee. Mengestu was educated at Georgetown and Columbia University.

The author says the voice of the narrator "popped" into his head one night when he was walking in D.C. and "saw an Ethiopian immigrant behind the counter of a small, little grocery store." And although the Times comments on Mengestu's "fine ear for the way immigrants from damaged places talk in the sanctuary of their own company," he says he "didn't deliberately go off and research anything" to write the novel.

"Obviously, I come from a family of immigrants," he says, "and if you pay attention to the environments around you, you get a sense of who these people are." He adds, "The character is driven by a search for a sort of home ... what I think is a pretty universal and pretty common feeling."

This reading of The Beautiful Things That Heaven Bears took place in February of 2008 at the Politics and Prose bookstore in Washington, D.C. 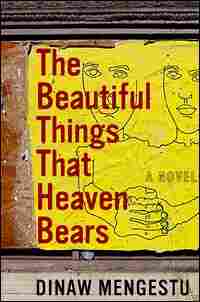 Joseph's already drunk when he comes into the store. He strolls through the open door with his arms open. You get the sense when watching him that even the grandest gestures he may make aren't grand enough for him. He's constantly trying to outdo himself, to reach new levels of Josephness that will ensure that anyone who has ever met him will carry some lingering trace of Joseph Kahangi long after he has left. He's now a waiter at an expensive downtown restaurant, and after he cleans each table he downs whatever alcohol is still left in the glasses before bringing them back to the kitchen. I can tell by his slight swagger that the early dinnertime crowd was better than usual today.

Joseph is short and stout like a tree stump. He has a large round face that looks like a moon pie. Kenneth used to tell him he looked Ghanaian.

"You have a typical Ghanaian face, Joe. Round eyes. Round face. Round nose. You're Ghanaian through and through. Admit it, and let us move on."

Joseph kisses me once on each cheek after he takes his coat off.

"That's my favorite thing about you Ethiopians," he says. "You kiss each other on the cheeks all the time. It takes you hours to say hello and good-bye because you're constantly kissing each other. Kiss. Kiss. Kiss."

Kenneth pours Joseph a scotch and the three of us raise our cups for a toast.

"How is America today, Stephanos?" Joseph asks me.

"He hates it," Kenneth says.

"That's because he doesn't understand it." Joseph leans closer toward me, his large moon-pie face eclipsing my view of everything except his eyes, which are small and bloodshot, and look as if they were added onto his face as an afterthought.

"I've told you," he says. "This country is like a little bastard child. You can't be angry when it doesn't give you what you want."

He leans back deliberately in his chair and crosses his legs, holding the pose for two seconds before leaning over and resting both arms on his thighs.

"But you have to praise it when it comes close, otherwise it'll turn around and bite you in the ass."

The two of them laugh and then quickly pour back their drinks and refill their glasses. There is a brief silence as each struggles to catch his breath. Before either of them can tell me something else about America ("This country cares only about one thing..." "There are three things you need to know about Americans..."), I call out, "Bukassa." The name catches them off guard. They both turn and stare at me. They swirl their cups around and around to make sure it looks like they're thinking. Kenneth walks over to the map of Africa I keep taped on the wall right next to the door. It's at least twenty years old, maybe older. The borders and names have changed since it was made, but maps, like pictures and journals, have a built-in nostalgic quality that can never render them completely obsolete. The countries are all color-coded, and Africa's hanging dour head looks like a woman's head wrapped in a shawl. Kenneth rubs his hand silently over the continent, working his way west to east and then south until his index finger tickles the tip of South Africa. When he's finished tracing his hand over the map, he turns around and points at me.

"Gabon." He says it as if it were a crime I was guilty of.

"What about it?" I tell him, "I hear it's a fine country. Good people. Never been there myself, though."

"Come on. I thought you were an engineer," Joseph taunts him. "Whatever happened to precision?" He stands up and puts his large fat arm over Kenneth's narrow shoulders. With his other hand he draws a circle around the center of Africa. He finds his spot and taps it twice.

"Central African Republic," he says. "When was it?"

He scratches his chin thoughtfully, like the intellectual he always thought he was going to become, and has never stopped wanting to be.

"Nineteen sixty-six," I tell him.

"But not close enough."

So far we've named more than thirty different coups in Africa. It's become a game with us. Name a dictator and then guess the year and country. We've been playing the game for over a year now. We've expanded our playing field to include failed coups, rebellions, minor insurrections, guerrilla leaders, and the acronyms of as many rebel groups as we can find—the SPLA, TPLF, LRA, UNITA—anyone who has picked up a gun in the name of revolution. No matter how many we name, there are always more, the names, dates, and years multiplying as fast as we can memorize them so that at times we wonder, half-jokingly, if perhaps we ourselves aren't somewhat responsible.

"When we stop having coups, we can stop playing," Joseph said once. It was the third or fourth time we had played, and we were guessing how long we could keep it up.

"I should have known that," Kenneth says. "Bukassa has always been one of my favorites."

We all have favorites. Bukassa. Amin. Mobutu. We love the ones known for their absurd declarations and comical performances, the dictators who marry forty women and have twice as many children, who sit on golden thrones shaped like eagles, declare themselves minor gods, and are surrounded by rumors of incest, cannibalism, sorcery, and magic.

"He was an emperor," Joseph says. "Just like your Haile Selassie, Stephanos."

"He didn't last as long, though," I remind him.

"That's because no one gave him a chance. Poor Bukassa. Emperor Bukassa. Minister of Defense, Education, Sports, Health, War, Housing, Land, Wildlife, Foreign Affairs, His Royal Majesty, King of the Sovereign World, and Not Quite But Almost the Lion of Judah Bukassa."

"He was a cannibal, wasn't he?" Kenneth asks Joseph.

"According to the French, yes. But who can believe the French? Just look at Sierra Leone, Senegal. Liars, all of them."

"The French or the Africans?"

"What difference does it make?"

We spend the next two hours alternating between shots and slowly sipped glasses of Kenneth's scotch. Inevitably, predictably, our conversations find their way home.

"Why do you always talk like that?" Kenneth demands.

"Because it is true. And that is the only way to describe it. If you have something different to say, then say it."

Kenneth leans his chair back against the wall. He's drunk and on the verge of falling.

He pours the last few drops of scotch into his cup and sticks his tongue out to catch them.

"I can't remember where the scar on my father's face is. Sometimes I think it is here, on the left side of his face, just underneath his eye. But then I say to myself, that's only because you were facing him, and so really, it was on the right side. But then I say no, that can't be. Because when I was a boy I sat on his shoulders and he would let me rub my hand over it. And so I sit on top of a table and place my legs around a chair and lean over and I try to find where it would have been. Here. Or there. Here. Or there."

As he speaks his hand skips from one side of his face to the other.

"He used to say, when I die you'll know how to tell it's me by this scar. That made no sense but when I was a boy I didn't know that. I thought I needed that scar to know it was him. And now, if I saw him, I couldn't tell him apart from any other old man."

"Your father is already dead," I tell him.

"And so is yours, Stephanos. Don't you worry you'll forget him someday?"

"All of our fathers are dead," Joseph adds.

It's the closest we've ever come to a resolution.

From The Beautiful Things That Heaven Bears by Dinaw Mengestu. Copyright © 2007 Dinaw Mengestu, Published by Riverhead Books, a member of Penguin Group (USA), all rights reserved. 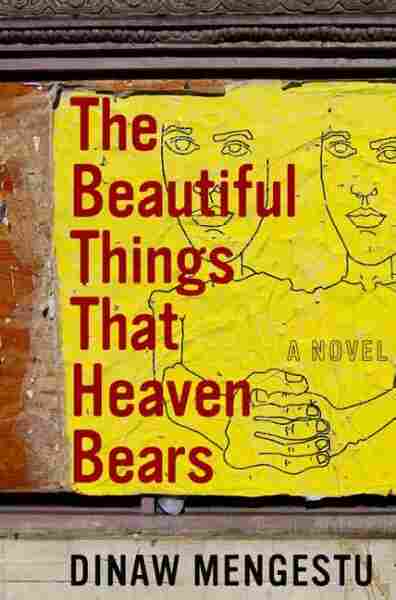 The Beautiful Things That Heaven Bears