Accessibility links
Gene Ammons: 'The Jug' Tenor saxophonist Gene Ammons had an ability to infuse originals and standards with preachy yet elegant clouds of sound. His immense talents helped the Chicago native shape the sounds of soul, jazz, and R&B. 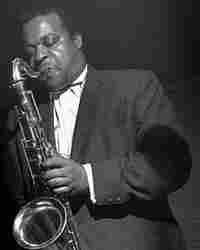 When Albert Ayler informed a critic that his music was more about feelings than about notes, he could also have been describing the immense yet undersung legacy of fellow tenor saxophonist Gene "Jug" Ammons.

A Chicago native, Ammons had an ability to infuse originals and standards with preachy yet elegant clouds of sound. His contributions to what became known as "soul jazz" were ignored by critics. But his abilities earned him the respect of jazz and R&B lovers, as well as innovative bandleaders such as Billy Eckstine and Woody Herman, who both had the vision to hire Ammons in the late 1940s.

Some of Ammons' stylistic versatility can undoubtedly be traced to his Chicago home, where he was born on Apr. 14, 1925. There, he heard the piano stylings of his mother, and perhaps most importantly his father, the celebrated boogie-woogie master Albert Ammons. He also learned from the renowned "Captain" Walter Dyett, the musical director of Chicago's DuSable High School. Dyett was instrumental in launching the careers of many other DuSable alumni, including the legendary crooner and pianist Nat "King" Cole and fellow saxophonist Johnny Griffin.

I would tell them to get a sound. Practice their sound. That's the most important thing.

In the early 1940s, Ammons joined the ensemble of trumpeter King Kolax, a stint that allowed him to craft a style out of two key saxophone influences — the blustery Coleman Hawkins, and the more painterly Lester Young. This marriage of aural ideologies was further honed in 1944, when Ammons joined the innovative orchestra of vocalist, trumpeter, and bandleader Billy Eckstine; there, his fluid, rich-toned style was featured on songs such as "Rhythm in a Riff" and "Blowing the Blues Away."

The next year found Ammons paired with the fleet-fingered, Charlie Parker-influenced alto saxophonist Sonny Stitt — a musical marriage that proved a hit both artistically and commercially. He also had a number of successful recording dates for Prestige Records during the same decade.

In 1958, Ammons suffered his first career setback when he was arrested and convicted for narcotics possession. He resumed playing at the end of his prison term in 1960, when jazz was in the midst of another sea change. A number of ensembles turned to the Hammond B-3 organ instead of the piano. The rise of unabashedly funky soul-jazz was a natural match for Ammons' driving, bluesy sound, and he was again able to lend his arresting tone to a number of successful projects.

Unfortunately, Ammons' drug problems led to a another arrest and conviction in 1962 — though jazz and blues expert Bob Porter says that Ammons was framed. Luckily, thanks to the savvy of Prestige Records producer Bob Weinstock, the label was able to continue releasing new material. Ammons was released from prison in 1969. From then until his death from bone cancer on Aug. 6, 1974, he continued to make new recordings, including the acclaimed collection The Boss Is Back, as well as equally memorable dates with saxophonists Dexter Gordon and Cannonball Adderley.

In the more than 25 years since his death, Ammons' soulful approach and versatility have continued to touch musicians and fans. The key to his unique influence is found in what Ammons told a journalist in 1961, when asked to offer advice to young musicians: "I would tell them to get a sound. Practice their sound. That's the most important thing."