Accessibility links
Traditional Folk Dance Modernized Bhangra is a traditional folk dance from Northern India. Now the dance originally performed by farmers in the Punjab region has come to colleges across the United States. The students are changing the village dance into a modern, competitive sport.

Bhangra is a traditional folk dance from Northern India. Now the dance originally performed by farmers in the Punjab region has come to colleges across the United States. The students are changing the village dance into a modern, competitive sport. 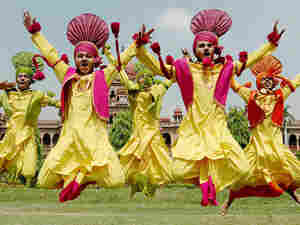 And let's talk now about a different kind of competition. Bhangra is a traditional folk dance from the Punjab region of Northern India. It's known for its bright colors and high energy. And in recent years it has migrated to some American college campuses where it has become a competitive sport.

ASMA KHALID: Decades ago in the fields of India people smiled naturally while dancing Bhangra. But these days Bhangra dancers in America are obliged to smile. Otherwise, judges will dock points. So with a broad smile, Khamal Deyal(ph) yells out dance instructions to her teammates.

Ms. KHAMAL DEYAL (Competitive Bhangra dancer): Guys, one more run through. Go all out. If you don't know where you're formation is…

KHALID: Deyal sounds like a cheerleading captain, but really this George Washington University junior is a competitive Bhangra dancer.

KHALID: Bhangra's a full body dance that calls for coordinated jumping, clapping and shoulder shrugging. Some say the best way to describe the unusual arm, shoulder and head movement is to imagine you're screwing a light bulb into the ceiling.

Fourteen years ago George Washington University held one of the nation's first ever Bhangra competitions in its school cafeteria. But these days the cafeteria is far too small for the thousands of people who want to watch. The D.C. area alone boasts roughly 10 teams, according to G.W. Dance Team co-captain Harsh Mulhey(ph).

KHALID: And as Bhangra's popularity has increased so has the collegiate field.

Mr. MULHEY: You know, every college has a Bhangra team now. So, like, typically at a competition that accepts eight teams, like, 40 teams apply. So it's actually really competitive to get in now.

KHALID: In the weeks leading up to a competition Mulhey's team practices five hours a night.

KHALID: Judges analyze synchronization, creativity and a team's ability to blend tradition with contemporary steps. Tagender Dinoha(ph) is a Bhangra judge, dancer and instructor from Northern California. He says Bhangra came to America in the 1960s and was changed by the experience.

Mr. TAGENDER DINOHA (Bhangra judge, California): It's been morphed by the next generation and then it's gone back to India and a lot of that influence has gone back with it.

KHALID: Take gender. Bhangra was an all-male dance. But now, Dinoha says coed teams in America have got men and women dancing Bhangra together in India. And in this country, Bhangra's popularity has spread beyond South Asian immigrant circles.

Ben Coffle(ph) is a white guy who's danced on a Bhangra team for four years.

Mr. BEN COFFLE (Competitive Bhangra dancer): I didn't grow up with any keen interest in India, you know. I didn't have, you know, a lot of South Asian friends growing up. It was just one of those things where, you know, for whatever reason I randomly happened to see Bhangra and I really liked the dance.

KHALID: Coffle joined Cornell University's Bhangra team as a sophomore. After graduating, his passion for Bhangra persisted, and so he sought out a non-collegiate Bhangra team in Washington D.C., where he now lives and works as a consultant. Although Coffle is a product of Bhangra's newfound popularity, he's still amazed by it.

KHALID: No one's quite sure just how many Bhangra teams there are in the U.S. But collegiate Bhangra dancers estimate that there are about 100 in places that might surprise you - from Harvard to Texas.

INSKEEP: You can hear this and other Bhangra music at npr.org/music.