Accessibility links
Bluegrass Suite Packs a Progressive 'Punch' Mandolin virtuoso Chris Thile has long been at the vanguard of progressive bluegrass music. But his new work is his most ambitious yet: Part chamber music, part song cycle, "The Blind Leaving the Blind" is a four-movement, 40-minute suite for bluegrass instruments.

Even though the result is something that's maybe hard to put a label on, it comes from bluegrass. And all of us grew up with bluegrass to some extent. And we're really comfortable with that music, and it informs everything that we play and think about.

Chris Thile's suite called "The Blind Leaving the Blind" was released on the new album Punch, from Punch Brothers.

It's part modern chamber music and part song cycle — an impressionistic picture of a young marriage gone sour called "The Blind Leaving The Blind." It owes a debt to Bach, Bob Dylan, even the Beach Boys. And, of course, bluegrass. 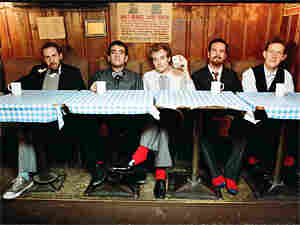 Since its birth in the late 1940s, bluegrass music has evolved in ways that founding father Bill Monroe could never have imagined. For more than a decade, mandolinist Chris Thile has been at the vanguard of that change as a soloist and a member of the popular acoustic pop band Nickel Creek.

Now, Thile has composed the most ambitious work of his career: A four-movement, 40-minute suite for bluegrass instruments. Recorded on a new album called Punch, Thile started writing the piece around the time he moved from Nashville to New York in 2005.

"Ever since I became better acquainted with classical music, I've wanted to try my hand at longer forms, but I could never really see my way to it," Thile says. "And after I got divorced, all of a sudden I had a lot of pent-up energy and lots of stuff that had gone into trying to make this failing relationship work that kind of got reapplied."

Thile got his start as a mandolin prodigy from Southern California who made his first solo album when he was 13. His heroes and mentors were the pioneers of progressive bluegrass: musicians like banjo player Bela Fleck and bassist Edgar Meyer. But only after he assembled a group of likeminded musicians from his own peer group was he able to focus his emotions and ideas into a long-form composition.

"The real work started getting done when I knew that I had a group of buddies who could actually play it with me," Thile says.

Pikelny says that the piece forced him to rethink what was possible on his instrument.

"For me, when I first received the score and saw what Chris was asking me to play on my instrument, that had to have been just as traumatic as him getting his divorce papers," Pikelny says. "He figured, 'Hey, if you have the notes there, you'll figure out a way to play it.'"

Bassist Greg Garrison had worked with Pikelny in the eclectic jam band Leftover Salmon, but he was just getting to know the other musicians when they first gathered to rehearse. He says they somehow crammed into Thile's tiny one-bedroom apartment in New York's East Village.

"I mean, the first time we tried to play the first movement, it sounded pretty awful," Garrison says.

As they chipped away at the piece over months of rehearsals, the group also worked up a batch of more conventional songs and released an album in 2006. They tried out several different band names, eventually settling on Punch Brothers, from a Mark Twain short story.

"The Blind Leaving the Blind" had its official world premiere at Carnegie Hall's 600-seat recital space Zankel Hall last March, as part of a series curated by composer John Adams. But the band also booked three nights last year to workshop the piece in front of the discriminating bluegrass and acoustic-music audience at Nashville's Station Inn. An unusual journey, but one Thile says suits the work.

"Even though the result is something that's maybe hard to put a label on, it comes from bluegrass," Thile says. "And all of us grew up with bluegrass to some extent. And we're really comfortable with that music, and it informs everything that we play and think about."

"Hard to label" is exactly what dobro player Jerry Douglas thought when he heard the piece for the first time. He's one of the founding fathers of progressive bluegrass, but he says that what Punch Brothers are doing is even more complex and cerebral.

"Sometimes, I felt like I was working a crossword puzzle," Douglas says. "Emotionally wrung out at the end of some part of it, because I'd concentrated so hard."

And he says that, for that reason, it won't be warmly received by some traditional bluegrass fans. But Douglas says he enjoyed it.

"The musician in me marveled at how well it all went together and how it kept my attention the whole way," he says. "And I just thought it was an amazing thing for somebody to do."

There were risks involved for the musicians who left steady work to support and elaborate on Chris Thile's vision. But Pikelny says the chance to do something entirely new was too compelling to pass up.

"We are definitely not the same musicians today that we were the day of that first impromptu jam session, and I think that required some kind of faith on Chris' part as far as how we would grow individually as an ensemble," Pikelny says.

That ensemble became part of Thile's post-divorce support group. He even wrote his friends into the end of the suite, conjuring a picture of the five of them on a night after an early rehearsal, sitting in the 11th Street bar in Manhattan, drinking scotch and trying to come up with band names.

"It's kind of a depressed happy, but it's happy nonetheless," Thile says. "And I thought that sitting there in the bar with the boys, having just worked really hard making some music together, and then kicking back afterwards — it was kind of like, I don't know, kind of what life is all about, really. Having your friends there to support you personally and musically."