Accessibility links
The Devil Gets His Due: Boito's 'Mefistofele' Arrigo Boito retells the story of the original, Faustian bargain — from the devil's point of view — in the colorful drama Mefistofele. The production is from Belgium's Royal Opera of Wallonie.

Listen
The Devil Gets His Due: Boito's 'Mefistofele'

The Devil Gets His Due: Boito's 'Mefistofele'

From the Royal Opera of Wallonie 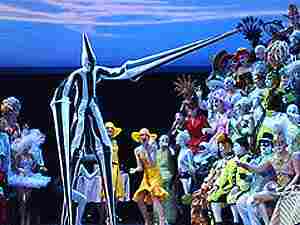 From time to time, people come along whose stories are so unique and vivid that their names actually become entries in the dictionary. One prime example is Faust, who made a disastrous deal with the devil — the sort of dubious arrangement now known as a "Faustian" bargain.

The original Faust is said to have been an eccentric scholar, Dr. Johann Georg Faust, who lived in Germany in the early 1500s. His legend showed up in a 1604 play by Christopher Marlowe, a classic drama by Goethe and a popular opera by Gounod — all of which are named after the good doctor.

Still, no matter what you call his story, the character of Faust often has a hard time living up to his star billing. That's not surprising, when you consider that the story's other main character is the devil himself. And there was at least one opera composer, Arrigo Boito, who recognized that.

Boito is best known as a librettist — and for good reason. He wrote the texts for Verdi's late operas Otello and Falstaff, two of the greatest operas ever written. But Boito also took a shot at composing operas of his own, including one that's based on the Faust legend.

His original idea was to write two operas around that one story. The first would be called Margherita, after the unfortunate young woman seduced by Faust. The other was to be Elena, named for a reborn Helen of Troy, one of the many temptations the devil conjures for Faust as part of their seamy bargain.

Ultimately, though, Boito settled on a single opera, named after the character who truly drives the action — the devil himself. He called the opera Mefistofele, and made the title character one of the great bass-baritone roles in opera.

On World of Opera, host Lisa Simeone brings us a production starring the Georgian bass Paata Burchaladze as Mefistofele, soprano Barbara Haveman as Margherita, and tenor Antonello Palombi as Faust. It comes to us from the Royal Opera of Wallonie, in Liege, Belgium.

The Story of 'Mefistofele' 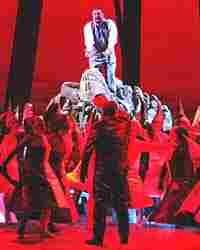 Faust (tenor Antonello Palombi) is the center of attention at the Witches Sabbath, in 'Mefistofele,' from the Royal Opera of Wallonie. (c) Jaques Croisier Photographe hide caption 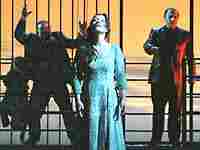 PROLOGUE and ACT ONE: In the heavens, brilliant trumpet-calls accompany a chorus of angels in praise of God. Mefistofele appears and interrupts the proceedings by offering God a wager — that he can win the soul of Faust. Through a chorus, God accepts the wager. Mefistofele promptly disappears, and the whole host of heaven resumes the song of praise.

Act One opens on a square in Frankfurt, where merrymakers are celebrating Easter Sunday. Faust is there with his stuffy student, Wagner, who finds the crowds boring. Evening approaches, and Wagner thinks of evil spirits. But Faust's attention is caught by an odd friar, who moves in mysterious circles. Wagner says the friar is a figment of Faust's imagination. But Faust sees the friar up close, and he seems to be murmuring prayers.

Later that evening, Faust enters his study. The enigmatic friar follows him in and quietly hides. The peaceful evening turns Faust's thoughts to God. But when he opens his Bible, a cry reveals the presence of Mefistofele. When Faust demands to know who his visitor is, the stranger announces himself as the Spirit of Denial. Mefistofele then offers his deal. He will be Faust's servant forever, and bring him eternal pleasures — in exchange for his soul. Faust agrees, and a contract is promptly signed. The Devil spreads his cloak, and the two fly off into the night sky.

ACT TWO: In a modest garden, Faust is courting a young woman named Margherita, while Mephistofeles flirts with her neighbor, Marta. Margherita asks Faust if he believes in God. Faust says he's seeking a deeper truth, an ecstasy defined by nature, love and mystery. When Faust tells Margherita that he's in love with her and they should find somewhere to be alone, she says that she shares a room with her mother, who's a light sleeper. No problem. With help from Mefistofele, Faust comes up with a special narcotic. He says it's completely harmless, and will help her mother sleep more soundly. In a vividly rhythmic quartet, the two couples — Margherita and Faust, Mefistofele and Marta — proclaim their different approaches to love.

The next scene opens on a mountain top. A lurid, red moon illuminates Faust and Mefistofele as they climb the mountainside with spirits following behind. When they reach the top, to join the Witches' Sabbath, Mefistofele seats himself on a rocky throne, and grabs a glass globe. Gazing into it, he tells Faust that the Earth is a wicked place, and smashes the globe on the rocks. The witches dance wildly and Faust has a disturbing vision of Margherita, wearing a blood-red necklace.

ACT THREE: Margherita lies chained in a prison cell. She has been accused of drowning her own baby, and of poisoning her mother. Mefistofele leads Faust to Margherita's cell, then leaves the two alone together. Faust pleads with Margherita to escape. Margherita wonders why he is so impatient that he won't even take the time to kiss her. She also confesses her crimes, and tells Faust exactly how she wants her victims' graves arranged.

Again Faust urges her to escape with him. In a duet, they imagine fleeing to an enchanted island. When Mefistofele returns and announces that dawn is about to break, Margherita thinks he's the executioner, sent to carry out her death sentence. Then she recognizes him as the devil. She prays for forgiveness, rejects Faust, and dies. As heavenly voices announce Margherita's salvation, Mefistofele drags Faust away.

ACT FOUR and EPILOGUE: Mefistofele brings Faust to a flowery meadow alongside a river. Helen of Troy and Pantalis are there, summoning sylphs and sea nymphs, who do a sensuous dance. When Faust and Mefistofele appear, Faust is enchanted with his surroundings. Mefistofele is uncharacteristically ill at ease. Helen laments the burning of Troy, and Faust is captivated by her beauty. When he addresses her in elegantly rhymed poetry, she's touched. The two sing a rapturous duet and retire to a grotto.

In the Epilogue, Faust is an old man, alone in his study. Mefistofele has given him an eventful life, but his experiences have been empty and meaningless. Now near death, he dreams about ruling over a peaceful nation. Mefistofele fears that Faust's soul is somehow slipping out of his grasp. While Faust holds the Bible close to his breast, praying for salvation, Mefistofele spreads his cloak, urging Faust to rejoin him and seek new adventures. But Faust draws his last breath, and dies. Celestial voices welcome his soul to heaven — and Mefistofele loses his wager.