Accessibility links
Hester Prynne: Sinner, Victim, Object, Winner The Scarlet Letter's proud adulteress is a vessel for the feelings and actions of the men who surround her — and a mirror revealing the reader's true feelings about the role of women in society. 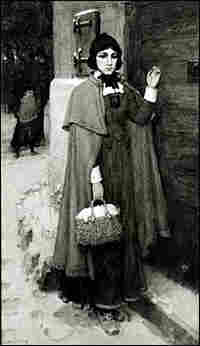 Anglo-American painter George Henry Boughton was popular for landscapes and for studies of the lives of New England Puritans. He imagined the character of Hester Prynne for an 1881 edition of Nathaniel Hawthorne's novel. Courtesy the Peabody Essex Museum hide caption

Sinner? Saint? Weigh In on the 'In Character' Blog.

Hester Then and Now 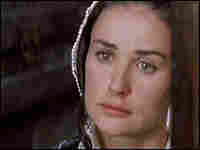 Demi Moore played Hester in a 1995 film version, opposite the Rev. Dimmesdale of Gary Oldman. Below, clips from that movie — and from a 1934 black-and-white version — illustrate how differently Hester has been interpreted across the decades. Hollywood Pictures hide caption

'You Should Not Have Come Here'

'I Must Go to Bellingham With the Truth'

The Pulitzer Prize-winning novelist wrote three novels that reinterpret The Scarlet Letter. He says he brought his own generation's views on marriage and sexuality to the American classic.

'There Was A New Kind Of Ethics'

From 'The Scarlet Letter'

Actress Jennifer Mendenhall, who provided the readings for the broadcast version of this story, here reads six crucial character-defining passages from The Scarlet Letter.

Another View Of Hester

'Be Thou Strong For Me'

A Flood Of Sunshine

The Scarlet Letter Ceased To Be A Stigma

The Truest Test Of A Life

Hester Prynne, protagonist of Nathaniel Hawthorne's masterwork The Scarlet Letter, is among the first and most important female protagonists in American literature. She's the embodiment of deep contradictions: bad and beautiful, holy and sinful, conventional and radical.

At first glance, Hester may seem more victim than heroine. The adultery she committed when her husband was thought lost at sea leads Boston's Puritan authorities to brand her with the bright red "A" of the title. She's forced to stand in shame before the mass of Puritan citizens, enduring their stares, their whispers and their contempt. In the self-righteous eyes of the townspeople, she is the ultimate example of sin.

Hester Prynne is also the object of a cruel and shadowy love triangle between herself, her minister lover, Arthur Dimmesdale, and her husband, now called Roger Chillingworth.

"The drama is really the drama of the patriarchial society's need to control female sexuality in the most basic way," says Evan Carton, literature professor at the University of Texas, Austin. "This classic male anxiety: How do you know for sure whether your baby is yours? If you don't know if your woman and your child are actually yours, then you have no control over property, no control over social order, no control over anything — and that's the deep radical challenge that Hester presents to this society."

America was in the midst of a growing feminist movement when Hawthorne wrote The Scarlet Letter. Professor Jamie Barlowe, of the University of Toledo, says that Hawthorne — living in Salem, Boston and later Concord, Mass. — "was very, very aware of the growing feminist insurgence. Women's rights were a part of the cultural conversation."

The first women's-rights convention at Seneca Falls, N.Y., was held in 1848, two years before The Scarlet Letter was published. Strong women like Susan B. Anthony and Elizabeth Cady Stanton were gathering other women to talk about science, politics and ideas. For the first time in America, women were challenging the firmly established male patriarchy. Hester Prynne can be seen as Hawthorne's literary contemplation of what happens when women break cultural bounds and gain personal power.

A Survivor, and Strong

In The Scarlet Letter, Hester Prynne may seem a victim and an object, but she also shows great personal strength. She survives.

Hester builds a small business doing embroidery-work. She raises her daughter, Pearl, by herself, fighting to keep her when the authorities try to take the child away. Over the years, Hester gains the respect of other women in Boston, becoming something of a quiet confidant for them.

Pulitzer Prize-winning novelist John Updike says the book still makes him cry. He describes a scene where Hester meets Dimmesdale in the forest and implores him to run away with her.

"First she throws away the scarlet letter," Updike recalls. "Then, quote, 'By another impulse, she took off the formal cap that confined her hair; and down it fell upon her shoulders, dark and rich, with at once a shadow and a light in its abundance and imparting the charm of softness to her features.'

"How wonderful, the power of the hair," Updike says.

Updike wrote three novels of his own based on the characters of The Scarlet Letter; they're often called Updike's Hawthorne Trilogy. The final one, titled simply S., is the story of a 20th century version of Hester Prynne. Updike says Hester is "fun to write about, because she was so irrepresible."

"She's such an arresting and slightly ambiguous figure," he says. "She's a funny mix of a truly liberated, defiantly sexual woman, but in the end a woman who accepts the penance that society imposed on her. And I don't know, I suppose she's an epitome of female predicaments."

Professor Barlowe says that how a reader feels about Hester Prynne "will have something to do with how that individual person sees women as functioning, or ways they should function."

A Mirror Turned on Social Norms

So, just as Hester is a vessel for the feelings and actions of the men who surround her in the book, she's also a mirror, revealing the true feelings of the reader about the role of women in society.

At the end of her life, Hester Prynne chooses to live in Boston and to continue to wear that red letter "A" on her breast, long after she has fulfilled her punishment.

"Never afterwards did it quit her bosom," Hawthorne writes. "But, in the lapse of the toilsome, thoughtful, and self-devoted years that made up Hester's life, the scarlet letter ceased to be a stigma which attracted the world's scorn and bitterness, and became a type of something to be sorrowed over, and looked upon with awe, yet with reverence too."

It becomes a symbol, in other words, that throughout her life she wore her sin bravely, out in the open, on her chest.

All the contradictions of Hester Prynne — guilt and honesty, sin and holiness, sex and chastity — make her an enduring heroine of American literature. She is flawed, complex, and above all fertile.

The idea of Hester Prynne, the good woman gone bad, is a cultural meme that recurs again and again — perhaps because we as a culture are still trying to figure out who Hester really is and how we feel about her. In John Updike's words, "She is a mythic version of every woman's attempt to integrate her sexuality with societal demands."