Accessibility links
SXSW 2008: The Whigs at Austin Music Hall Shortly after coming together, The Whigs' members were already packing clubs in their native Athens, Ga., as well as its neighbor, Atlanta. Mission Control's charms show through its meaty production. 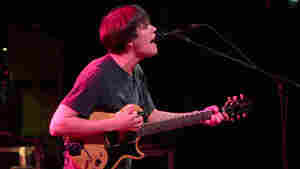 Within months of coming together, The Whigs' members were already packing clubs in their native Athens, Ga., as well as its metropolitan neighbor, Atlanta. Local fans just couldn't argue with the band's clever mixture of Pixies, The Replacements, and Spoon — an easy sell for a crowd looking for something both accessible and enthusiastic. Hear a concert recorded live at the Austin Music Hall in Austin, Tex., on March 13, 2008.

Dave Matthews took notice and signed The Whigs to his label, and just recently released the group's second album, Mission Control. Despite the disc's familiarity, there's a bigger sense that a lot of energy went into its recording. Mission Control's pop charms show through its meaty production.

Hear the other bands from this concert: My Morning Jacket, Yo La Tengo.