Accessibility links
Stephen Malkmus And The Jicks In Concert With his ironic wordplay, deadpan delivery, and spiky guitar hooks, Malkmus helped make his former group Pavement one of the most influential rock acts of the '90s. Hear Malkmus and his backing band The Jicks, recorded live in concert from Washington, D.C. 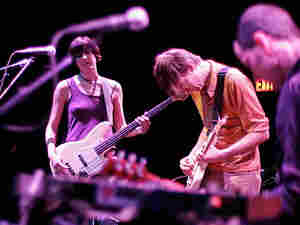 Stephen Malkmus and the Jicks performing live at the 9:30 Club in Washington, D.C. Joel Didriksen for kingpinphoto.com hide caption

A chatty Stephen Malkmus took the stage in Washington, D.C., with his latest incarnation of The Jicks, chatting up the 9:30 Club's sold-out March 28 crowd with the wry humor that's made his clever brand of rock 'n' roll so popular. Anchored by his band's latest addition — former Sleater-Kinney drummer Janet Weiss — Malkmus and The Jicks ran through more than an hour and a half of old favorites and new cuts from their latest album, Real Emotional Trash. Hear the full performance, originally webcast live on NPR.org.

With his ironic wordplay, deadpan delivery, and spiky guitar hooks, Malkmus helped make his former band Pavement one of the most influential underground rock acts of the '90s. Malkmus went solo after Pavement broke up in 2000, taking with him the formula fans loved: compelling narratives with a healthy dose of humor and instantly catchy melodies.

Malkmus' new Real Emotional Trash is a wry, carefree collection of songs that shimmy playfully. But it's also an unapologetic rock album, with dirty guitar riffs, feedback-driven solos, and lengthy jams. The two forms play well together: The infectious pop elements keep the garage-rock from sprawling out of control, while the propulsive jams lend the pop a gritty energy.

Malkmus has released four solo albums since Pavement split up. The Jicks' members have appeared on two of them: 2003's Pig Lib and Real Emotional Trash. In addition to Weiss, The Jicks feature Mike Clark on guitar and Joanna Bolme on bass.