Accessibility links
Herbert von Karajan's Symphonic Obsessions Karajan shot to the top of the classical music scene in the 1950s, remaining supremely powerful until he died in 1989. He left a legacy of gorgeous recordings, as well as a fair amount of controversy. 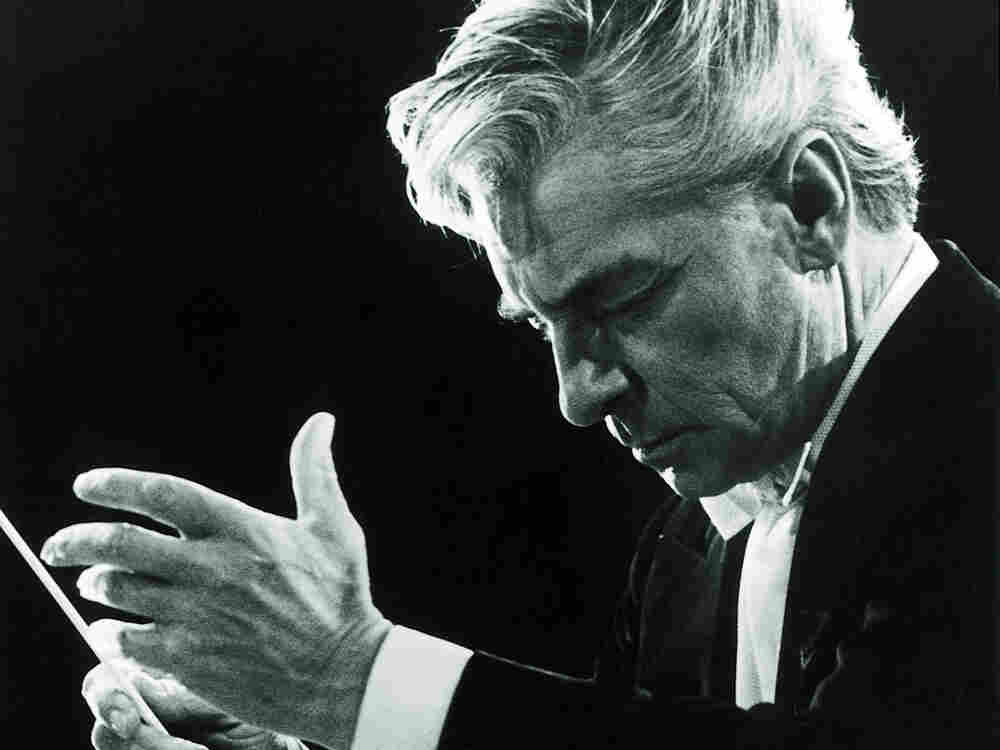 The brilliant but controversial Austrian conductor Herbert von Karajan was born 100 years ago Saturday. To commemorate the occasion, his record labels have been busy reissuing much of Karajan's vast catalog of recordings and videos, which span from the mid-1940s until he died in 1989.

There's enough drama in Karajan's life to make a movie. In Hollywood, the pitch might go something like: "Ingenious young conductor from Mozart's hometown joins Nazi Party to further career, then bulldozes his way to the top, conducting Europe's powerhouse orchestras."

"There's this wonderful joke," violinist Anne-Sophie Mutter says, "where apparently Karajan landed in Berlin, and he took a cab and the cab driver asked him, 'Where to, maestro?' And he answered, 'Oh, it doesn't matter. They need me everywhere.'"

Mutter had read all about Karajan's glamorous lifestyle by the time she auditioned for him in 1977 at age 13 — the fast cars, yachts, airplanes and his immense musical empire. Karajan had a keen nose for talent, and he launched Mutter's international career.

Karajan bolted to the top in the mid-1950s, when he took over three monumental institutions: the Salzburg Festival, the Vienna State Opera and, most importantly, the Berlin Philharmonic, with a contract he demanded "for life."

But Karajan wasn't amassing power for power's sake. Mutter says he was obsessed with making sound that was perfectly beautiful.

"And with beauty he didn't mean Botox beauty," she says. "He meant beauty of soul, beauty of art."

Karajan rehearsed his orchestras for hours on end, and, when it came time for a concert or recording session, he could simply stand on the podium and conduct the musicians with his eyes closed, as if in a trance. Some compared the sheen and elegance of the so-called "Karajan sound" to a Rolls Royce.

"If you talk about Rolls Royce," Mutter says, "you should not forget the Ferrari underneath. If I think about the low strings — the double basses and the celli — it's just amazing how these guys could blow your hair off."

That rich, lush sound can be heard in any number of recordings that Karajan made of the ultra-romantic repertoire, including symphonies by Brahms, Bruckner and Mahler — and especially in the music of Richard Strauss. His tone poem called A Hero's Life is, on many levels, Karajan's own musical autobiography. Especially the section Strauss titled "The Hero's Adversaries."

Resistance in the Empire

Richard Osborne wrote the book Herbert von Karajan: A Life in Music. He says that as Karajan's power grew, so did the list of his enemies.

"They demonized him," Osborne says. "And the demonization really became quite serious in the late 1970s and early '80s. And then, of course, after he died and the laws of libel no longer applied, the most appalling things were said about him."

Fuel for the fires of hostility naturally came from Karajan's membership in the Nazi Party. He joined in 1935 to advance his blossoming career. But he wasn't interested in politics, and Hitler disliked him. Still, one might ask why Karajan stayed in Germany.

After the war, bogus information was circulated stating that Karajan had joined the party twice. Karajan's concerts were banned in Detroit and picketed in New York. Philadelphia Orchestra director Eugene Ormandy refused to shake Karajan's hand when the Berlin Philharmonic toured the U.S. in 1955.

Yet for all the stories of greed and egomania, Karajan was a master conductor. And, as with a film director's magic touch with actors, Karajan inspired his musicians — including James Galway, who became the principal flutist for the Berlin Philharmonic in 1969.

"I always played better for him than anybody else," Galway says. "He brought out the best in you all the time. The orchestra sat on the front of their chairs. If you watch any movie of the Berlin Philharmonic, nobody sits back." 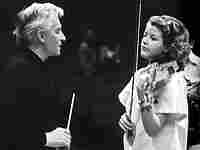 Anne-Sophie Mutter was only 13 when she first auditioned for Herbert von Karajan. He launched her international career, and suddenly every top conductor wanted a teen prodigy. Siegfried Lauterwasser/DG hide caption 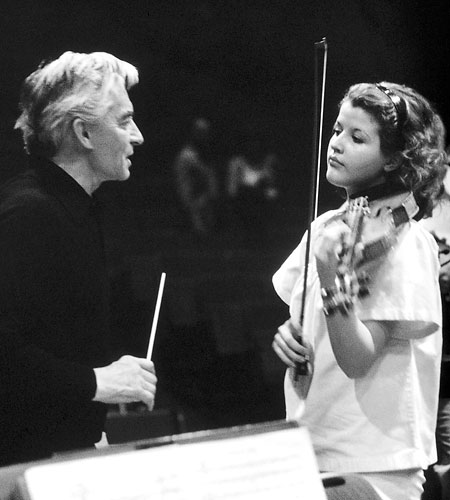 Anne-Sophie Mutter was only 13 when she first auditioned for Herbert von Karajan. He launched her international career, and suddenly every top conductor wanted a teen prodigy.

Karajan had control over the Berlin Philharmonic for life. But his success and autocratic attitude slowly generated resentment within the orchestra. A series of rancorous battles over power in the early 1980s even resulted in a lawsuit. Karajan finally stepped down in April 1989, just three months before his death.

Karajan's final concert and recording, made that same month, was with his other orchestra: the Vienna Philharmonic. The music was close to Karajan's heart — Anton Bruckner's Symphony No. 7, a shimmering monolith of sound.

So here we are, 100 years after Karajan's birth, and the record companies are again trotting out hundreds of reissues for one of their heroes. Whether Karajan was actually a hero will always be debated. What is undeniable, as Karajan said himself in an interview, is the man's singular quest to make beautiful music.

"This is the real great satisfaction in my life," Karajan said, "was that I was allowed to bring music to so many people."

It's been estimated that Karajan has sold more than 200 million LPs, CDs and videos worldwide. And that number is sure to only keep growing.