The final volume, At Canaan's Edge, focuses on the last three years of King's life. Branch joins Fresh Air to discuss these years, including King's attempts to bring the Civil Rights movement north, J. Edgar Hoover's efforts to discredit King, and the disagreement between advocates of nonviolence and those in favor of a more militant movement.

This interview originally aired on January 16, 2006. 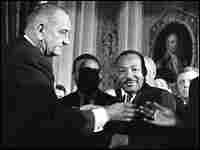 Marking the 25th anniversary of Dr. King's death in 1993, Liane Hansen visited the city where he died:

The author's thoughts on:

The Legacy of Non-Violent Dissent

Dr. King and the Threat of Death

Johnson and King on the Phone (audio quality is poor)

In Taylor Branch's history At Canaan's Edge, Martin Luther King Jr. is a citizen of his time. The Alabama peace marches; the Watts riots of 1965; the Vietnam conflict that dominated the late '60s — King dealt with them all.

The first book in Branch's trilogy, Parting the Waters, won the Pulitzer Prize for history. Pillar of Fire, his second installment, was published in 1998 — it follows the path the movement and its leaders from President John F. Kennedy in the White House to King being awarded the Nobel Peace Prize.

At Canaan's Edge begins in Selma, Ala. — just before a bloody confrontation on the Edmund Pettus Bridge on Sunday, March 7, 1965, between state troopers and marchers on their way to petition Gov. George Wallace for the right of black people to vote.

The book ends in 1968, on the balcony of the Lorraine Motel in Memphis, Tenn., where King was shot and killed.

In describing the days between those two seminal events, Branch touches on myriad elements of King's life, both large and small — from his discussions with President Lyndon Johnson to what type of cologne Ralph Abernathy favored.

At more than 1,000 pages, At Canaan's Edge stands as a chronicle of a turbulent time in American history. And its subject — an Atlanta reverend who energized people from all walks of life — is an ideal prism through which to view an era that changed the country.

Read a brief excerpt from At Canaan's Edge:

Terror approached Lowndes County through the school system. J. T. Haynes, a high school teacher of practical agriculture, spread word from his white superiors that local Klansmen vowed to kill the traveling preacher if he set foot again in his local church. This to Haynes was basic education in a county of unspoiled beauty and feudal cruelty, where a nerve of violence ran beneath tranquil scenes of egret flocks resting among pastured Angus cattle. Across its vast seven hundred square miles, Lowndes County retained a filmy past of lynchings nearly unmatched, and Haynes tried to harmonize his scientific college methods with the survival lore of students three or four generations removed from Africa — that hens would not lay eggs properly if their feet were cold, that corn grew only in the silence of night, when trained country ears could hear it crackling up from the magic soil of Black Belt Alabama.

Lessons about the Klan arrived appropriately through the plainspoken Hulda Coleman, who had run the county schools since 1939 from a courthouse office she inherited from her father, the school superintendent and former sheriff. After World War II, when Haynes had confided to Coleman that the U.S. Army mustered him out from Morocco with final instructions to go home and vote as a deserving veteran, she explained that such notions did not apply to any colored man who valued his safety or needed his job in her classrooms. Haynes stayed on to teach in distinguished penury with his wife, Uralee, daughter of an engineer from the Southern land-grant colleges, loyally fulfilling joint assignment to what their Tuskegee professors euphemistically called a "problem county." Not for twenty years, until Martin Luther King stirred up the Selma voting rights movement one county to the west, did Negroes even discuss the franchise. There had been furtive talk since January about whether Haynes's 1945 inquiry or a similarly deflected effort by an aged blind preacher qualified as the last attempt to register, but no one remembered a ballot actually cast by any of the local Negroes who comprised 80 percent of the 15,000 residents in Lowndes County.

Despite ominous notices from Deacon Haynes, Rev. Lorenzo Harrison was keeping his fourth-Sunday commitment when the sound of truck engines roared to a stop outside Mt. Carmel Baptist on February 28, 1965. Panic swept through the congregation even before investigating deacons announced that familiar Klansmen were deployed outside with shotguns and rifles. Harrison gripped the pulpit and stayed there. He lived thirty miles away in Selma, where he knew people in the ongoing nonviolent campaign but was not yet involved himself, and now he switched his message from "How can we let this hope bypass us here?" to a plea for calm now that "they have brought the cup to the Lord's doorstep." He said he figured word would get back to white people that he had mentioned the vote in a sermon. Haynes reported that some of the Klansmen were shouting they'd get the out-of-county nigger preacher before sundown, whether the congregation surrendered him or not. 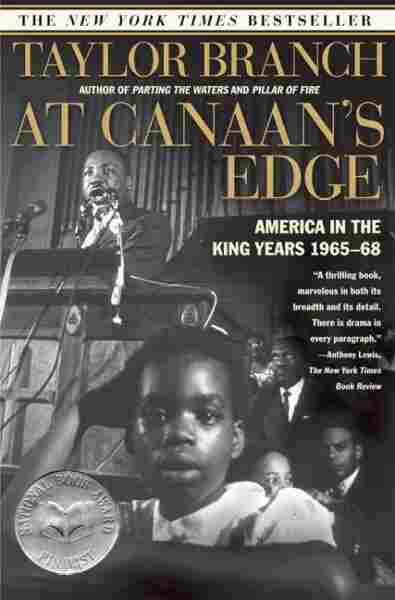