Accessibility links
Virginia Preacher Leads Congregation In Song Frank Newsome leads the congregation at the Little David Church in Haysi, Va. One of the songs he sings at services is the hymn "Beulah Land." He says the tone of his voice changes when he can feel the spirit of the Lord and singing becomes easy. 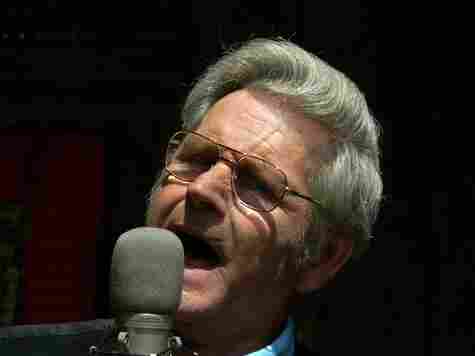 Frank Newsome leads the congregation at the Little David Church in Haysi, Va. Old Regular Baptists, they sing the way people sang when they first came to the American colonies: without instruments or notation, and following their leader line by line. It's called lined-out hymnody, and people outside the southern Appalachian Mountains rarely hear it. One of the songs Newsome sings at services is a hymn about longing for heaven, called "Beulah Land."

"I turned my life around," Newsome says. "Went to talking to the good man above and asked him to help me. I believe I repented of my sins and got right with the good Lord. And the talent that he's given me, now I'm using it for him."

One of 22 children, none of whom are twins, Newsome says his family has always looked out for each other. "We didn't have nothing much, like other people did, but one thing we had was love."

He walked with his mother four miles to their church house and four miles home again every Saturday and Sunday. Newsome says he's loved "the old sound" since he was a little boy.

"It's just so sweet to me when I can feel the spirit of the Lord. It makes everything so easy," Newsome says. He says he sometimes goes through the motions of preaching and singing, but "it's a different tone in my voice when the Lord's blessed me to sing and to preach."