Accessibility links
YaHoWa13: A '70s Spiritual Rock Commune Reunites Source Family members camp out in a house in Los Angeles together for the first time in 30 years. They revisit the meaning of their organic, polygamous commune and spiritual leader Father Yod's death.

Spiritual leader Father Yod transformed the lives of hundreds of people. Soon after he died in a hang-gliding accident, many of his followers parted ways.

Just recently dozens of former tribe memembers, including many of his wives, camped out together in Los Angeles. The group's band YaHoWa13 honored attendees with a performance. 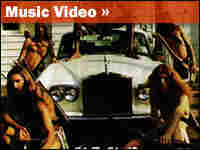 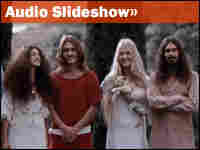 Isis Aquarian tells what it was like to be one of 13 wives in the Source Family. Source Family Archives hide caption

I went into this story with more preconceived notions than I was willing to admit. Having grown up in Berkeley during its 1980s cult heyday, I spent my teens cynically fetishizing flocks of robed people, who looked brainwashed and sinister.

Even my parents dabbled in what I've always referred to as "ooga booga" stuff. Our house was filled with remnants of the spiritual revolution of the '70s: sacred "shakti" boots and protective pyramid plant covers. My mother was forever trying to force me to meditate.

So when I interviewed Isis the Aquarian, one of 13 wives of spiritual leader Father Yod, and the Source Family commune's official Keeper of Records, I was particularly interested to hear about her daughter's reaction. Her portrayal of the the irritation she'd caused Saturna was told with such blunt realism and humor, I laughed and started to admire her for her openness.

As I met more former commune members, I saw they shared a playful comfort with their own quirkiness. The fact that they all looked so good didn't hurt their appeal, either. Maybe it was a result of eating primarily organic food for so long.

Magnetized by their rock-star aura, I followed them everywhere, from dawn to dusk, and gathered too much audio. I joked that I was experiencing the exhaustion and loss of identity I'd once spelled out in a report about cult induction.

It took only two consecutive 5 a.m. meditations to trip up my system. Even after the Source reunion I'd attended was over, I couldn't wake up after sunrise. Alone at home, I took up the predawn meditation routine Father Yod developed in the '70s: breathing exercises, followed by chanting and a carefully brewed cup of coffee.

After a few weeks, I started noticing a shift in my mental state. Father Yod's teachings unexpectedly began to resonate. Suddenly, it felt like the most natural thing in the world to stop eating meat. So I did.

During this time I visited my parents up in Berkeley and mentioned Father Yod's second natural foods restaurant, The Old World. My mother sat up.

"The Old World! That's where I ate almost every day during my pregnancy with you!"

I started seeing things differently. While reading a book by Lama Yeshe, whose Buddhist lectures my parents were always dragging me to in the '70s, I suddenly saw the wisdom of leaving behind old identities, as the Source Family members had done.

As a Zen experiment, I got rid of my home Internet account. I found I enjoyed the communal feeling of checking my e-mail at the public library.

Noticing these behavioral changes, my father bristled, "You've gone too native with this story!"

Now that I'm done with it, I've gone back to "normal." My Internet is back up, and I wake up after the sun just as anxious about the day ahead as ever.

But I'm still not eating meat. And I haven't lost sight of what I said to Jodi Willie, publisher of a book about The Source, back when I was still deep in what I've come to see as my '70s-style consciousness shift. Jodi asked what it felt like to have no Internet at home and to be so immersed in the family. I told her it felt peaceful, refreshing — as if I'd literally had my brain washed.