Accessibility links
Nada Surf In Concert Opening with "Hi-Speed Soul" from its 2002 album Let Go, Nada Surf performed for a sold-out crowd in a live concert webcast for NPR.org. A wistful pop song that ponders the meaning of reality, "Hi-Speed Soul" set the tone for an evening of inspired, thoughtful rock as the New York trio shared old favorites and showcased work from its latest album, Lucky. 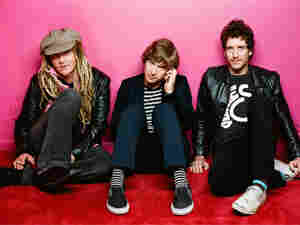 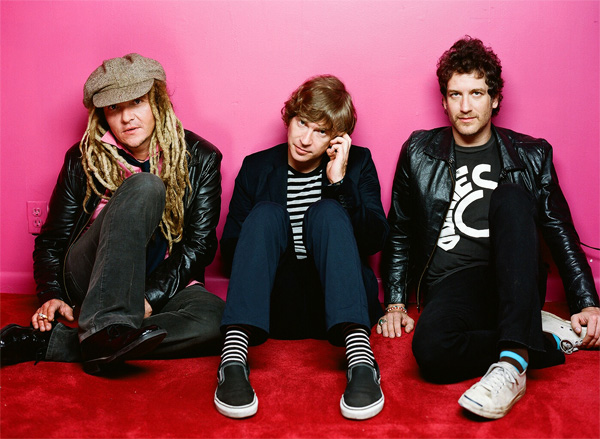 "I sometimes feel like adult life is just too much for me and there's just too much that can be upsetting," said Nada Surf frontman Matthew Caws, shortly before taking the stage at Washington, D.C.'s 9:30 Club. "But, we'll be fine."

Opening with "Hi-Speed Soul" from their 2002 album Let Go, a slightly older, reflective Caws and the other members of Nada Surf performed for a sold-out crowd in their live concert webcast for NPR.org. A wistful pop song that ponders the meaning of reality, it set the tone for an evening of inspired, thoughtful rock as the New York trio shared old favorites and showcased work from its latest album, Lucky.

Few could have guessed that Nada Surf would last as long as it has. The band's 1996 debut, High/Low, brought the group a sudden burst of fame for the novelty song "Popular." But Nada Surf was soon dismissed as a one-hit wonder, and its label dropped the band after deeming its follow-up, The Proximity Effect, unreleasable.

The turmoil led to a three-year break for the band. Its members took day jobs, and Nada Surf seemed destined for the remainders bin. But in 2001, it returned to the studio to record what would become Let Go. Released on Seattle's Barsuk label, it was a critical success. Nada Surf followed that disc with 2005's The Weight Is a Gift and this year's Lucky — an appropriate title for a band that survived the kind of turmoil that's dismantled countless other groups.

"I tend to be pretty hopeful about things further in the future, but full of anxiety about the next eight hours," Nada Surf frontman Matthew Caws says. "Unlike my friend John Flansburgh from They Might Be Giants, who says he's manic depressive without the depression, I think I'm manic depressive without the mania. Yet I'm ready to be cheerful at the drop of a reason. I'm always looking for rapture in music."

At first listen, rapture is hard to find on Nada Surf's Lucky. The songs, while beautifully crafted, are sometimes melancholy affairs, with bittersweet meditations on love and loss, parenthood, and even war and death. But there's still a wink of irony throughout. The songs are ultimately hopeful and buoyant, with ringing guitars and memorable melodies; the songs are also deeply personal, rooted in a philosophy the band established from the very beginning.

Lucky features Caws, Lorca, and drummer Ira Elliot, along with a cast of guest performers, including Death Cab for Cutie's Ben Gibbard, Ed Harcourt, Long Winters singer John Roderick, Sean Nelson of Harvey Danger, and Martin Wenk of Calexico. Wenk will perform on keyboards and trumpet with the band during Saturday's live concert.

Kaki King is otherwise known as Katherine Elizabeth King, a gifted guitarist and songwriter from Atlanta, GA. She's known for using alternate tunings and her remarkable ability to hammer the strings of her guitar to draw out unconventional sounds. Her debut was the 2003 album Everybody Loves You, followed by Legs to Make Us Longer in 2004 and ...Until We Felt Red in 2006. Her latest CD is Dreaming of Revenge on Velour Records.

The Jealous Girlfriends are a rock quartet based in Brooklyn, NY, featuring Holly Miranda on vocals and guitar, Alex Lipsen on keys, Josh Abbot on guitar and vocals and Mike Fadem on drums. Their sound is an unusual and inspired mix of classic rock, trip-hop and experimental art pop with guitars that are both jagged and lush. They self-released their debut, Comfortably Uncomfortable in 2005. They originally released their self-titled followup in 2007, but it was reissued on Good Fences in 2008.