Accessibility links
Stage Mother from Hell: Needy, Greedy Mama Rose Gypsy's antiheroine is a woman boiling over with frustrated ambition, who channels all her energies into turning her daughters into stars — woe be to anyone who gets in her way. Jeff Lunden has an appreciation. 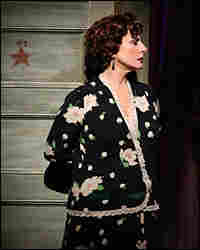 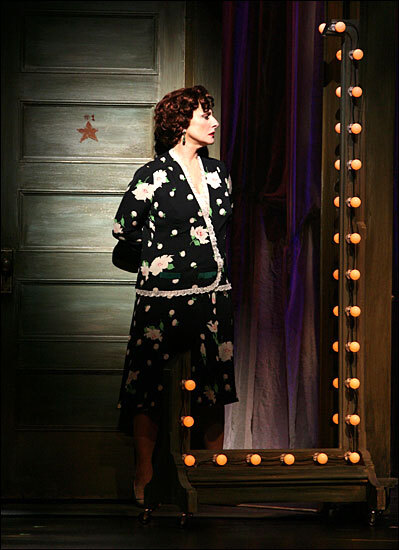 Ever since she made her first appearance in the brassy, larger-than-life performance of Ethel Merman in 1959, Gypsy's Mama Rose has been a touchstone of musical theater.

The only thing is, if you ask the man who created her -- playwright Arthur Laurents -- to talk about Mama Rose, the first thing he does is correct you. It's Madame Rose, not Mama Rose.

"I've never understood that, because she certainly would loathe being called [that]," Laurents says. "And she was ... nobody ever thought of her as a mother! Why she's called 'Mama Rose,' I don't know."

Whether you call her Madame Rose or Mama Rose, she's the stage mother from hell. In the dazzling score, by composer Jule Styne and lyricist Stephen Sondheim, and in Laurents' coruscating script, Rose is a woman boiling over with her own frustrated ambition. And she channels all her energies into turning her daughters into stars -- woe be to anyone who gets in her way. She's horrifying. She's mesmerizing.

Arthur Laurents on the Genesis of 'Rose's Turn'

Patti LuPone on What Happens During 'Rose's Turn'

Angela Lansbury on What's Behind 'Everything's Coming Up Roses'

"I can't think of another part in a musical that's this complex, this large and this grand," says New York Times critic Ben Brantley.

How complex, how large, how grand?

"It really is like King Lear with music," says Bernadette Peters, who played the part in a 2003 revival. "I mean, it's amazing."

Arthur Laurents created Mama Rose pretty much out of whole cloth. Fifty years ago, he was approached by producer Leland Heyward, who wanted Laurents to adapt the memoirs of burlesque star Gypsy Rose Lee memoirs into a musical.

"I said I wasn't interested in writing a musical about the strip-tease queen of America," Laurents remembers. "And Leland said, 'Keep thinking; you'll come up with an idea.' 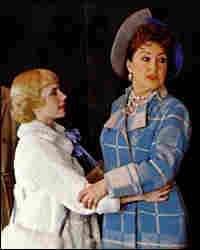 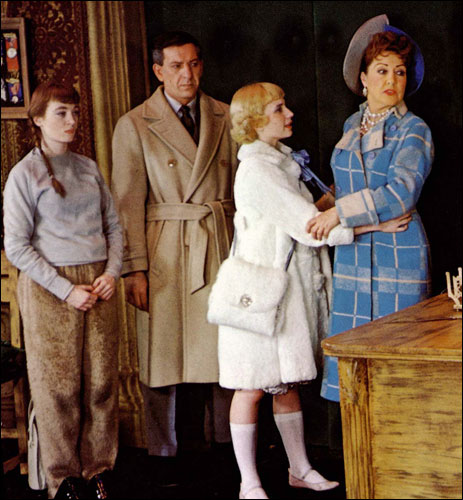 And, as Laurents found out, the real Rose was no delicate flower. She toured the country on the cheap with a vaudeville troupe starring her daughters, June -- who later became the famous actress June Havoc -- and Louise, who became Gypsy Rose Lee. There was also a contingent of young boys, all of them part of the show.

"She had the two little girls and all the little boys in the newsboy act in one room in a hotel," Laurents recalls. "The manager came [and] objected, and she pushed him out the window. Killed him. I didn't use that, but ... I used her pushing him around!"

Survivor Yes, Monster Maybe -- and for Actresses, a Dream

Patti LuPone is currently starring in another smash-hit Gypsy revival, this one directed by the 90-year-old playwright. While many find the steamrolling character of Rose to be an ogre, LuPone doesn't.

"She has tunnel vision, she's driven, and she loves her kids," LuPone says. "And she is a survivor. I do not see her as a monster at all -- she may do monstrous things, but that does not make a monster."

Two musical numbers -- both all about Mama Rose, naturally -- from the 2008 Broadway revival.

'If Momma Was Married'

Rose, says critic Ben Brantley, is single-minded, and she takes what she needs.

"She's a classic American success story -- you do what you need to fulfill your objective," he says. "And her objective is to get her daughters famous, so she can experience it vicariously. So, sure, if it involves stealing the silverware, or taking the blankets from hotels to make coats, that's what you do.

And when Rose is thwarted in her attempts to succeed, she just tries another way. Out of context, the Act 1 finale "Everything's Coming Up Roses" seems like an upbeat song. But in the show, it's a chilling moment. Rose's daughter June has eloped and run away, and Rose decides to make the hitherto untalented Louise a star -- if it kills her.

"She talks about how everybody has walked out -- you know, her mother walked out, her first husband, her second husband, and now the daughter that she created this act for has walked out," LuPone says. "And now she turns on a dime and says she's gonna make the second daughter a star. And there's desperation.

Three Takes on the 'Turn'

And if Louise doesn't have the talent to become a vaudeville star, then by God she'll be a stripper -- even if it destroys Rose's relationship with Herbie, her fiance, or morally compromises her daughter. It's a dynamite moment, says Ben Brantley.

"When that last desperate chance is grabbed for -- on the one hand you shudder, on the other hand you heave a sigh of relief, because you know you're about to experience yet another burst of intensity -- one of the most intense moments in all musicals," he says.

"Rose's Turn" may be the great moment in American musical theater. Alone onstage, Rose confronts the truth: Her ambition and manipulation have made everyone leave her.

Mama Rose appeals to actresses for any number of reasons. But one of them, says Brantley, may be bigger than others.

"She's what show business is about," Brantley says. "She's why people go into it; it's that hunger for attention. It's 'Look at me, watch me, I want to make a difference, I want to be seen.'"