Accessibility links
Wars of Comics and Culture in 'Ten-Cent Plague' In The Ten-Cent Plague, David Hajdu chronicles what he calls "a forgotten chapter in the history of the culture wars" — the heated controversy over comic books.

Listen
Wars of Comics and Culture in 'Ten-Cent Plague'

Wars of Comics and Culture in 'Ten-Cent Plague' 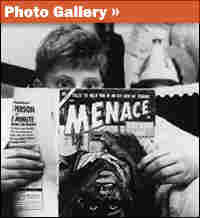 See the images that sparked the 1950s comic-book wars.
NPR

Do you remember the 1950s comic-book debates?

After World War II, the squeaky-clean comic-book superheroes of the 1940s were joined on newsstand shelves by darker, edgier anti-heroes and -heroines. Inspired by the same influences driving pulp fiction and film noir, graphic novels took on grittier, more adult narratives — and naturally were a hit with young readers.

It wasn't long before parents took notice. In The Ten-Cent Plague: The Great Comic Book Scare and How it Changed America, David Hajdu chronicles what he calls "a forgotten chapter in the history of the culture wars" — the heated controversy over comics.

Hajdu says those disputes — which included book burnings and congressional hearings — were about much more than cartoons. Ten-Cent Plague details how the controversy nearly killed the comic business but also played a key role in defining postwar pop culture.

"The comic-book war was one of the first and hardest-fought conflicts between young people and their parents in America," Hajdu writes, "and it seems clear, too, now, that it was worth the fight."

The Great Comic-Book Scare and How It Changed America 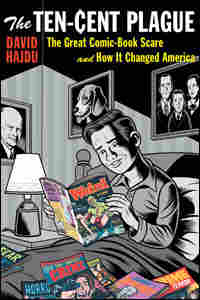 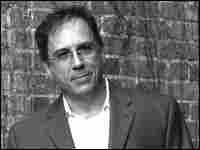 David Hajdu is a critic for The New Republic and a professor at Columbia University's Graduate School of Journalism. He is the author of Lush Life, Positively 4th Street and, most recently, The Ten-Cent Plague. Michelle Heimerman/Courtesy Farrar, Straus and Giroux hide caption

Sawgrass Village, a tidy development about twenty-five miles east of Jacksonville, Florida, is named for the wild marsh greenery that its turf lawns displaced. It has 1,327 houses, each of them pale gray on the outside. On the inside, the one at 133 Lake Julia Drive is a dream shrine — a temple not to the past, like many other homes of retirees, but to a life imagined and denied. All the walls in its eight rooms, as well as the halls, are covered with framed paintings by Janice Valleau Winkleman, who moved there from Pittsburgh with her husband, Ed, in 1982, when he ended his four-decade career in sales (first, chemicals, then steel products). She had been painting almost every day for nearly thirty years. Having shown artistic talent at an early age, she had taken some formal training in fine art and illustration, and, at age nineteen, she began working professionally, drawing for Quality Comics in Manhattan. Then, one evening eleven years later, she came home from work and never went back.

For more than fifty years after that, Winkleman made no mention of the fact that she had had artwork prominently published as Janice Valleau. Her daughter Ellen grew up reading comic books without knowing that her mother had once helped create them.

In 2004, the Winklemans' living room held seventy-four paintings — vigorous watercolor seascapes with violent waves, rendered in heavy blues and blacks; an acrylic of two seagulls suspended in flight, positioned upright in a golden-brown sky and surrounded by other gulls darting about them in every direction; watercolor after watercolor of old sailing ships, moldering in dry dock; a few abstracts of angular shapes and patterns done in pastel; portraits of exotic, alluring young women, one of them topless, with her face either unfinished or painted over. The images — at once lovely and tortured, all skillfully done but madly varied — could occupy a graduate art student or a psychoanalyst for some time.

At age eighty-one, Winkleman was a fragile woman, weakened by age and illness, though she still painted when she felt up to it, usually one or two days each week. "I like art — it's important to me," she said in a small but firm voice. Her eyes were bright behind grand, squarish glasses that covered most of her face. She sat straight-backed in a thin-cushioned metal chair that went with the desk in a half-room that also had her easel and taboret, a few boxes of art supplies, and a tea set. Her hands formed a teepee on her lap. She wore a pressed linen house dress and well-used tennis shoes, and she kept her legs crossed tightly with her calves angled back under the chair, as if to hide the shoes. Hanging in a frame on the wall to her right was the original pen-and-ink art to the first page of a Blackhawk comic-book story drawn by one of her old studio mates, Reed Crandall. In the days when they were working together, Winkleman had sneaked the page home in her portfolio, because she admired Crandall's dynamic compositions and sure line.

"I wanted to be a magazine illustrator, but I loved comics, too," she said, pointing her teepee toward the Blackhawk page. "I would have been happy being in any kind of art at all."

Why, then, had she stopped working professionally half a century earlier? The paintings all over her house show that Winkleman had the skill and the versatility to have done commercial illustration. She had the experience in comics and the affection for the medium to have continued in that field. With the imagination she applied to some of her canvases, she might even have pursued fine art professionally. Why not?

"My God," she said. She separated her hands and slapped them on her lap, then slowly brought them back together. "I couldn't go back out there — I was scared to death. Don't you know what they did to us?"

In the mid-1940s, when Janice Valleau was thriving as an artist for Quality Comics, the comic book was the most popular form of entertainment in America. Comics were selling between eighty million and a hundred million copies every week, with a typical issue passed along or traded to six to ten readers, thereby reaching more people than movies, television, radio, or magazines for adults. By 1952, more than twenty publishers were producing nearly 650 comics titles per month, employing well over a thousand artists, writers, editors, letterers, and others—among them women such as Valleau, as well as untold members of racial, ethnic, and social minorities who turned to comics because they thought of themselves or their ideas as unwelcome in more reputable spheres of publishing and entertainment.

Created by outsiders of various sorts, comics gave voice to their makers' fantasies and discontent in the brash vernacular of cartoon drawings and word balloons, and they spoke with special cogency to young people who felt like outsiders in a world geared for and run by adults. In the forties, after all, the idea of youth culture as it would later be known — as a vast socioeconomic system comprising modes of behavior and styles of dress, music, and literature intended primarily to express independence from the status quo—had not yet formed; childhood and young adulthood were generally considered states of subadulthood, phases of training to enter the orthodoxy. Comic books were radical among the books of their day for being written, drawn, priced, and marketed primarily for and directly to kids, as well as for asserting a sensibility anathema to grown-ups.

Most adults never paid much mind until the comics — and the kids reading them — began to change.

During the early postwar years, comic books shifted in tone and content. Fed by the same streams as pulp fiction and film noir, many of the titles most prominent in the late forties and early fifties told lurid stories of crime, vice, lust, and horror, rather than noble tales of costumed heroes and heroines such as Superman, Captain Marvel, and Wonder Woman, whose exploits had initially established the comics genre in the late thirties and early forties. These unprecedented dark comics sprouted from cracks in the back corners of the cultural terrain and grew wild. Unlike the movies and the broadcast media, comic books had no effective monitoring or regulatory mechanism — no powerful self-censoring body like the film industry's Hays Office, no government authority like the FCC imposing content standards. Uninhibited, shameless, frequently garish and crude, often shocking, and sometimes excessive, these crime, horror, and romance comics provided young people of the early postwar years with a means of defying and escaping the mainstream culture of the time, while providing the guardians of that culture an enormous, taunting, close-range target. The world of comics became a battleground in a war between two generations, delineating two eras in American pop-culture history.

"Comic books are definitely harmful to impressionable people, and most young people are impressionable," said the psychiatrist Fredric Wertham, author of an incendiary tract, Seduction of the Innocent, which indicted comics as a leading cause of juvenile delinquency. "I think Hitler was a beginner compared to the comic-book industry.

"The time has come to legislate these books off the newsstands and out of the candy stores."

Churches and community groups raged and organized campaigns against comic books. Young people acted out mock trials of comics characters. Schools held public burnings of comics, and students threw thousands of the books into the bonfires; at more than one conflagration, children marched around the flames reciting incantations denouncing comics. Headlines in newspapers and magazines around the country warned readers: "Depravity for Children — Ten Cents a Copy!" "Horror in the Nursery," "The Curse of the Comic Books." The offices of one of the most adventurous and scandalous publishers, EC Comics, were raided by the New York City police. More than a hundred acts of legislation were introduced on the state and municipal levels to ban or limit the sale of comics: Scores of titles were outlawed in New York, Connecticut, Maryland, and other states, and ordinances to regulate comics were passed in dozens of cities. Soon, Congress took action with a set of sensational, televised hearings that nearly destroyed the comic-book business. Like Janice Valleau, the majority of working comics artists, writers, and editors — more than eight hundred people — lost their jobs. A great many of them would never be published again.

Through the near death of comic books and the end of many of their makers' creative lives, postwar popular culture was born.

Page-one news as it occurred, the story of the comics controversy is a largely forgotten chapter in the history of the culture wars and one that defies now-common notions about the evolution of twentieth-century popular culture, including the conception of the postwar sensibility — a raucous and cynical one, inured to violence and absorbed with sex, skeptical of authority, and frozen in young adulthood — as something spawned by rock and roll. The truth is more complex. Elvis Presley and Chuck Berry added the soundtrack to a scene created in comic books.

It is clear now that the hysteria over comic books was always about many things other than cartoons: about class and money and taste; about traditions and religions and biases rooted in time and place; about presidential politics; about the influence of a new medium called television; and about how art forms, as well as people, grow up. The comic-book war was one of the first and hardest-fought conflicts between young people and their parents in America, and it seems clear, too, now, that it was worth the fight. 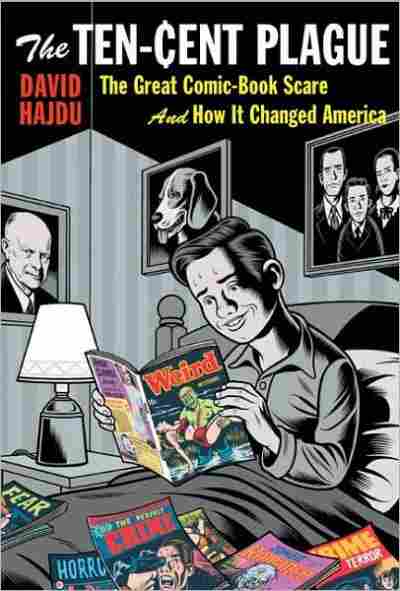 The Great Comic-Book Scare and How It Changed America