Accessibility links
DeVotchKa In Concert Best known for scoring the endearing soundtrack to Little Miss Sunshine, the Denver-based band DeVotchKa makes bittersweet songs with whistled melodies and sorrowful tales of the brokenhearted. Now on tour for its latest CD, A Mad and Faithful Telling, DeVotchKa gave a full concert at Washington, D.C.'s 9:30 Club, originally webcast live on NPR. May 16. 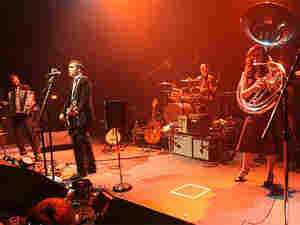 Devoktcha took the stage at the 9:30 Club in Washington, D.C. with class, from their formal attire to the flower petals tossed into the crowd. With violins, a viola, trumpets, sousaphone and accordion it was a constant whirlwind of energy and passion. Frontman Nick Urata is the father of this eight-piece band. In an interview before the show he said the group's worldly sound — the sound of Eastern Europe in particular — may have come from the early accordion music he heard from his grandparents, or maybe just in his blood and fused with the music he hears back home in Denver.

Best known for scoring the endearing soundtrack to Little Miss Sunshine, DeVotchKa makes bittersweet songs with whistled melodies and sorrowful tales of the brokenhearted. It's an inventively quirky hodgepodge of Eastern European folk, American pop, polka, circus music, and cabaret. The group is now on tour for its latest CD, A Mad and Faithful Telling. Shortly after DeVotchKa's show in Washington, D.C., Urata texted All Songs Considered host Bob Boilen, saying "I thought of something I didn't get to say: Mad and Faithful is the kind of album I've dreamed of making since I started making records."

Despite its cross-cultural sound, DeVotchKa rejects being labeled "world music" and calls itself a simple rock band. The Western pop structures give its music a distinctively modern sound that's passionate and danceable, but there's no denying the international flavor. Stage sets for the band's live shows are cluttered with an odd assortment of horns (sousaphone, tuba, trumpet), as well as a bouzouki, accordion, violin, and theremin.

Bios for the band members read like the cast of a strange and epic tale. There's the classically trained violinist, a drummer raised by Lithuanian polka musicians, and a sousaphone player from a Civil War reenactment band. Singer Nick Urata is descended from a Sicilian and a Gypsy who met in an arranged marriage.

It's a surprising clash of sounds and personal stories that works without seeming overly precious or campy. Urata has a heartbreakingly beautiful voice, while interplay between the other band members — Jeanie Schroder, Shawn King, and Tom Hagerman — sounds elegant and inspired.

DeVotchKa formed in 1997, but spent several years playing burlesque shows before self-releasing its debut, Supermelodrama, in 2002. Una Volta followed the next year, and the acclaimed How It Ends surfaced in 2004. DeVotchKa first reached a widespread audience in 2006, when its members were asked to score the film Little Miss Sunshine. The movie was eventually nominated for several Oscars, while DeVotchKa's soundtrack was nominated for a Grammy.