Accessibility links
Love Among the Druids: Bellini's 'Norma' Bellini's Norma has entranced audiences, and challenged the greatest sopranos, for more than 175 years. At the Vienna State Opera, Edita Gruberova demonstrates that the title role demands mature artistry as well as pure, vocal prowess.

Love Among the Druids: Bellini's 'Norma'

Maria Callas, one of the greatest Normas of all time, sang the role more than 90 times and recorded the opera twice. This performance of the signature aria 'Casta Diva' is from her 1961 recording.

The ethereal lyricism of 'Casta Diva' has made it such a true classic, that it's also the 'B Side' of this week's Single. They say Maria Callas didn't often listen to recordings of other sopranos, but she called Rosa Ponselle 'the greatest singer of us all.' 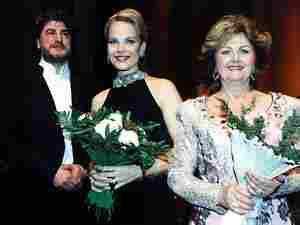 Over the centuries, opera composers and librettists have created scores of spectacular roles for sopranos.

It's true that many of the most familiar and beloved soprano roles involve operatic characters regarded, perhaps justly, as stereotypical — fictional women who all too often occupy the standard ground of lovesick innocents, pining away for men who have more on their minds than just romance. Cio-Cio-San in Puccini's Madame Butterfly comes to mind.

Then there are the vivacious soprano characters who take advantage of their beauty to seduce their way to positions of fame and fortune, only to be denounced as harlots, and worse, by the same men who put them there. Think about Violetta in Verdi's La Traviata and the title character in Massenet's Manon.

But however these roles are analyzed, and perhaps criticized, the characters and the sopranos who portray them have become wildly popular — and playing the roles demands an extraordinary range of technical mastery, dramatic expression and musical artistry.

And of all the great soprano roles in operatic history, there's one that may cover more dramatic territory, and demand more of those who perform it, than any other.

The title character in Bellini's Norma is a role with emotions ranging from haughty and demanding, to desperately passionate, to vengeful and defiant. And the singer must convey all of this while confronting some of the most vocally challenging music ever composed.

And if that weren't intimidating enough for any singer, Norma and its composer have become almost synonymous with the specific and notoriously torturous style of opera known as bel canto — literally, "beautiful singing."

In the early decades of the 19th century, bel canto composers, who also included Rossini and Donizetti, concentrated on sheer beauty of tone and vocal agility. Their long, flowing lines, built from luscious melodies, have been compared to Chopin's Nocturnes for piano. The music is often extremely difficult to perform; singers have to maintain the line and support the tone, over phrases stretched out to seemingly endless lengths.

Though Bellini died when he was 33, having written only 10 operas, his music may be as close as anyone came to pure bel canto, and Norma has become emblematic of everything the style came to embody.

For more than 175 years now, the title role has both challenged and inspired many of the world's finest singers, and soprano Edita Gruberova has been one of the finest Normas of her generation. On World of Opera, host Lisa Simeone presents a production featuring Gruberova, along with a distinguished supporting cast, at the historic Vienna State Opera.

The Story of 'Norma' 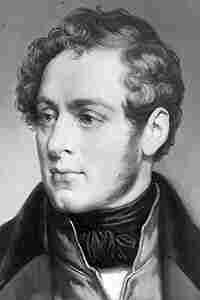 Composer Vincenzo Bellini in 1830, one year before the premiere of Norma. Hulton Archive/Getty Images hide caption

ACT ONE: The action takes place in ancient Gaul, under Roman occupation, where the Druid priestess Norma has fallen in love with a Roman official named Pollione and has secretly borne him two children. Norma is also the daughter of the Druids' leader, Oroveso.

As the action begins, Oroveso instructs his followers to go into the sacred forest and wait for Norma, who will signal the start of a planned revolt against the Romans. When the Druids leave, we find Pollione talking with the centurion Flavio. Pollione admits that he's no longer in love with Norma. His new romantic interest is the young acolyte Adalgisa, one of Norma's temple virgins. In the forest, a brass gong sounds. Pollione and Flavio leave, and a chorus announces the arrival of Norma.

As she cuts the sacred mistletoe, Norma sings the classic bel canto aria "Casta Diva," a prayer to the goddess for victory over the Romans. The Druids follow Norma off, leaving Adalgisa alone to struggle with her emotions. She's torn between her love for Pollione, and her loyalty to Norma and her sworn duties. Pollione joins Adalgisa and begs her to elope with him to Rome.

The second scene takes place at Norma's home. She tells her friend Clotilde to hide her two little boys — the sons Norma had with Pollione. She's afraid of her ambivalent feelings toward them: "I love, and at the same time, hate, my children," she says.

Adalgisa pays a visit to Norma, asking to be released from her vows. She admits she's found love, though she doesn't say with whom. Norma is touched, remembering her own early days with Pollione. She agrees to release Adalgisa from her vows. But when Pollione arrives, the truth comes out. Norma realizes that he has betrayed her with Adalgisa, and Adalgisa learns that Pollione had pledged himself to Norma.

The act closes in a fiery confrontation. Norma curses Pollione, saying "My burning fury will engulf you like the wind and the waves." She orders Adalgisa to go with him. Adalgisa tells Pollione she'd rather die than desert her people.

ACT TWO: So far, Norma has come across as an unpredictable and even dangerous woman. Now, we find her sounding vulnerable and filled with doubt — and with a knife in her hand. She's still angry with Pollione and contemplates killing their two young sons. She raises her dagger over the sleeping children, but at the last moment backs down.

Norma calls for Adalgisa, and tells her to take the children and go live with Pollione in Rome. In a spectacular duet, Adalgisa says she won't do it. Instead, she'll tell Pollione of Norma's suffering, hoping that will move him to come back to Norma.

The scene changes to the sacred forest. Oroveso tells his Druid warriors to keep their anger for the Romans in check. They must wait for just the right moment to attack. They leave, and Norma is alone with Clotilde, who tells Norma that Adalgisa has failed to change Pollione's mind. He still loves Adalgisa, and plans to carry her off to Rome.

Norma is furious. "The traitor will go too far," she says, "but I will strike first, and Roman blood will flow like water." She runs to the altar and strikes the ceremonial brass shield, summoning the troops to battle.

In the commotion, an intruder is discovered within the Druid temple. It's Pollione. The punishment for any outsider entering the temple is instant death, and Norma is poised to kill him with the sacred dagger. But she hesitates, admitting to herself that she can't go through with it.

Taking Pollione aside, Norma offers him freedom if he will leave Adalgisa. But Pollione refuses, saying he'd sooner die. Norma says she'd be delighted to arrange for that and for the death of their two young sons, plus the death of his beloved Adalgisa. Pollione begs Norma to spare Adalgisa's life.

Suddenly, Norma calls for her people, announcing that Pollione won't be killed after all. Instead, there's a new victim, one who has betrayed her country. "I am the guilty one," she says and then calls for the sacrificial pyre to be prepared. The crowd tries to bring Norma to her senses, but she won't budge. She's determined to go down in flames. In her final words to her father, Norma admits that she is the mother of Pollione's children and asks the shocked Oroveso to protect them. Meanwhile, Norma's bravery revives Pollione's love for her. He steps to her side, and the opera closes as the two walk into the flames together.