Accessibility links
The Raconteurs In Concert Loud and brash with an arsenal of infectious riffs, hear The Raconteurs in a full concert, recorded live from Washington, D.C.'s 9:30 Club.

Listen
The Raconteurs In Concert 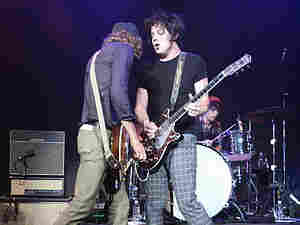 The Raconteurs just want to have fun. Loud and brash with an arsenal of infectious riffs, the quartet plays with swagger, a wry sense of humor and one, singular message: Let's rock. Hear The Raconteurs in a full concert, recorded live from Washington, D.C.'s 9:30 Club.

When The Raconteurs formed in 2005, the group initially drew a lot of attention because one of its members was guitarist Jack White of the wildly popular duo The White Stripes. But White did his best to deflect attention and insisted The Raconteurs wasn't a side project. The band soon released a stunning debut, Broken Boy Soldiers, with guitarist Brendan Benson sharing equal parts of the songwriting and singing duties.

"Sometimes Brendan's singing words I wrote or I'm playing chord changes he wrote," says White in an interview with NPR's Lynn Neary. "It's good that way. If you have it the same way, you kind of don't push each other enough. It's good to just kind of work in that framework and say we're writing this song together. Doesn't matter if it's 90 percent or ten percent or whatever. Just contribute."

White brings his lyrical word play, distinctive voice and thundering guitar work to the group, while Benson lends his gift for song craft and production. "It's been great because I think we let each other just go," says Benson. "Like, for instance, on (one song) 'Old Enough,' I wrote and sing these verses and then he comes in with these bridges that he wrote and sings. And together it just really makes it so cool."

Drummer Patrick Keeler and bassist Jack "LJ" Lawrence round out the group. Both are also members of the Cincinnati, Ohio rock group The Greenhornes.

The Raconteurs are currently on tour for their second studio release, Consolers of the Lonely. Forgoing pre-release publicity or marketing, the band put out the album almost immediately after they finished mastering it in early March.