Accessibility links
On Turf Talk's 'West Coast,' Hyphy Grows Up On his sophomore album, West Coast Vaccine (The Cure), the Bay Area rapper transforms the boisterous, slang-obsessed hyphy style of hip-hop into a darkly reflective take on the genre's diverse past.

Bring the Base Back

Back in the Day 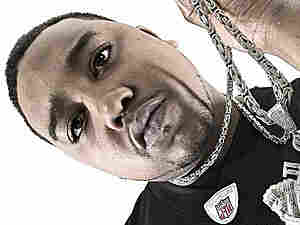 To hear tastemakers tell it, hyphy was dead before anyone had ever heard of it. The boisterous, slang-obsessed rap style is the sound of the San Francisco Bay Area, where its artists are local superstars. It received a split second of national attention in 2006, around the time would-be ambassador E-40's "Tell Me When To Go" was becoming the genre's first mainstream hit. But, as with so many next-big-things, hyphy's moment never came, and interest in the subgenre quickly retreated to localist status.

Turf Talk, E-40's cousin and one of many once poised to ride the hyphy bandwagon to success, never let the lack of national acclaim quiet his menacing snarl. On his sophomore full-length, West Coast Vaccine (The Cure), the Vallejo resident turns hyphy's energy inward. He forgoes the ecstasy-addled absurdity of his peers in favor of darker intensity, drawing on the mellow-but-hard funk of the pre-hyphy Bay Area underground. (The album's art appropriately depicts Turf Talk with an intravenous line to a stack of classic LPs from that era, including The Click's Down & Dirty and Too $hort's Born To Mack.)

But don't mistake it for throwback. Turf Talk's production team, helmed primarily by Rick Rock and 20-year-old whiz kid Droop-E (who, not so incidentally, is also E-40's son), use the synth-heavy sheen of hyphy as a launch pad for their twitching nods to not only first-wave Bay music, but also many a hip-hop microgenre. Seamlessly blending old-school electronic impulses with mid-'90s sample-based production, the beats themselves provide something of a history lesson.

Turf Talk's raspy vocals have less concrete origins. He raps in shifting cadences where a whisper can quickly become a scream, or an old-school slow flow can stop and go into a double-time blur. These complexities make for a unique push-and-pull dynamic with his producers. Turf Talk wraps phrasing around their beats, echoing their sporadic bass kicks or tinkling pianos as they simultaneously adapt to his styles — stripping down arrangements to make way for his virtuosic verses, then building them up to wall-of-sound pandemonium when the chorus comes back around.

In an era when major-label artists such as M.I.A. and Kanye West receive excess acclaim for fusing hip-hop with elements of worldbeat and European house music, respectively, West Coast Vaccine is a reminder that hip-hop's own diverse past is just as ripe for recontextualization. In the process, it demonstrates that some of the genre's largest creative leaps are still being made from less celebrated pockets.