Accessibility links
The Self-Help Guide To Wagner The mere mention of Richard Wagner's name can be a lightning rod for controversy. Wagner the man was a scoundrel, but his music was far ahead of its time. Wagner biographer William Berger joins NPR's Lisa Simeone for an overview of the artist and his groundbreaking music. 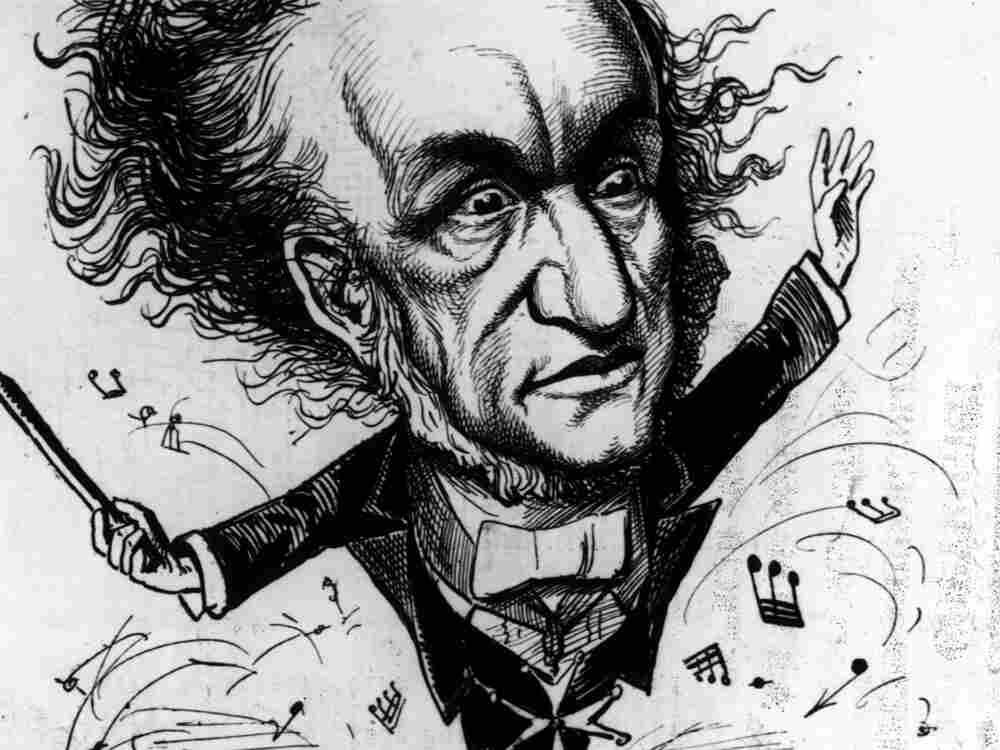 Richard Wagner was a larger than life figure, and his innovations as a composer changed Western music forever. Hulton Archive/Getty Images hide caption 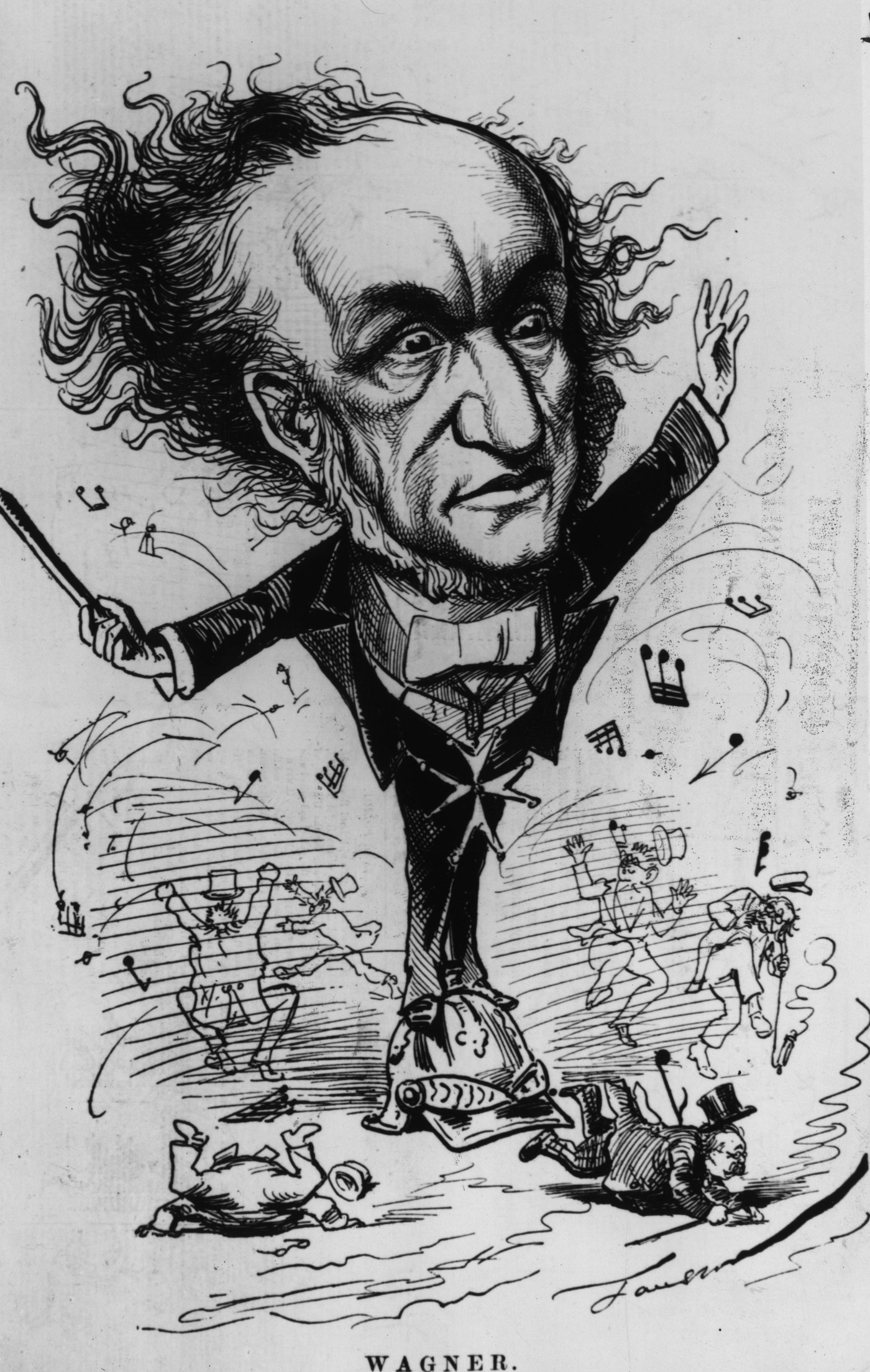 Richard Wagner was a larger than life figure, and his innovations as a composer changed Western music forever.

See and hear a list of Wagner recordings, recommended by William Berger, author of Wagner Without Fear.

A Guide to Surviving Wagner 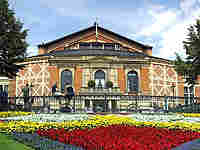 In 1872, Wagner began to build a radically new theater at Bayreuth, Germany, in which his operas are still performed today. AFP/Getty Images hide caption 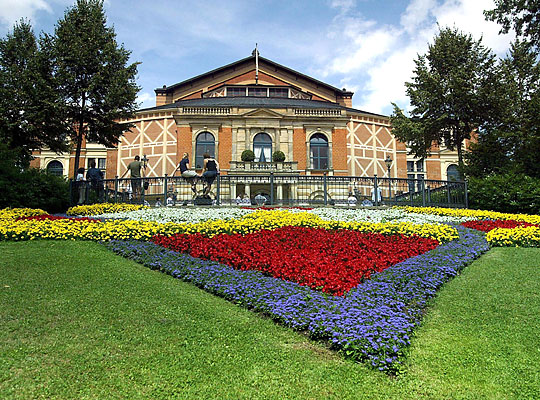 In 1872, Wagner began to build a radically new theater at Bayreuth, Germany, in which his operas are still performed today.

Wagner You Must Hear

Love him or hate him, if you're a fan of classical music, and especially opera, you have to contend with Richard Wagner, the controversial composer who made sweeping changes in the arts. His life, music, and legacy continue to inspire and confound listeners and critics.

Wagner's music contains the loftiest aspirations of humankind, yet it was also the soundtrack to tragedy. His mammoth operas have inspired composers, authors, directors, and even dictators.

He's the one who decided it would be a good idea to turn the house lights down and watch a drama in the dark. He built a radically new theater at Bayreuth, Germany, to his obsessive specifications. He exploded the length, breadth, and height of music-theater, changing it forever.

But Wagner's creative genius has been tainted by his personality — by his overzealous references to militarism and nationalism, as well as his overt anti-Semitism. It's not surprising that his works would later be adopted by Adolf Hitler to symbolize his notion of the Third Reich. Wagner's music, to this day, is taboo in Israel.

In his book Wagner Without Fear, William Berger tries to demystify some of the anxiety the mere mention of Wagner's name generates.

"You don't have to be a complete lunatic, you don't have to sign your life over in order to appreciate Wagner," Berger says. "If he's going to ask you to sit in the theatre for five or six hours, I would ask people to believe that he's got that much to say. So we're dealing with a difficult artist but a truly unique one."

"The entire human experience can be found in his music," Berger adds. "With Wagner, you don't just get the signs of a journey; you go through that journey."

Lord of the Ring

Loyal "Wagnerheads," as fans are sometimes called, seem unfazed by the length of his extra-long operas — especially the full 18-hour Ring Cycle, the series of four operas designed to be heard over four consecutive days. Some even travel the world, scoring tickets to wherever the Ring Cycle is performed.

The Ring of the Niebelungs (Der Ring des Nibelungen), as it's officially called, is populated with gods and goddesses, water-spirits, dragons, giants, dwarves, and objects from the powerful golden ring to a magic helmet that makes its wearer disappear, like Harry Potter's invisibility cloak. Wagner's story is drawn from Norse mythology, Germanic folk poetry, and his own head. He creates an entire universe, from the formation of the world to its fiery end.

The Ring Cycle may represent Wagner at his most ambitious, but his opera Tristan und Isolde is perhaps his most influential.

"You can write books just about the first four notes, called the 'Tristan chord,'" Berger says. "This redefined music for Europeans, and consequently quite a lot of other people." Wagner's series of notes is in no known key signature, and to this day retains its unsettling tone.

"It's still going to make you twitch a little, even today," Berger says. "The beauty of this chord is that it sounds unfinished in some way. And, in fact, it doesn't finish until the very last note of the opera, hours and hours later."

Wagner's endless melody builds and constantly moves forward throughout Tristan und Isolde's five-hour running time. Berger says it mimics the path of love, noting that one magazine in the 1970s referred to the opera as "the soundtrack to The Joy of Sex."

"It's really a very intense look," Berger says, "at how it feels — in both positive and negative terms — to be in love."

In Wagner Without Fear, Berger also focuses on Wagner's dark side. "By all accounts," Berger writes, "Wagner was an impossible human being. Even his devotees acknowledge this."

Wagner was Adolf Hitler's favorite composer. In 1936, Hitler attended a grand production of Wagner's Lohengrin at Bayreuth and was bowled over by it. Hitler's admiration isn't surprising, given that Wagner was resolutely anti-Semitic.

"There was the basic material for a Nazi fetish in Wagner's art right from the start," Berger says. "There was the xenophobia and anti-Semitism; without any doubt, it's there."

Even a few of Wagner's operatic characters have been singled out as examples of his anti-Semitism. The unlikable Beckmesser in Die Meistersinger and the greedy Alberich in The Ring Cycle, some theorists say, were given perceived Jewish characteristics by Wagner and thus portrayed in a denigrating way.

Because of the music's Nazi connections, Berger says it's no surprise that Israel has kept an informal ban on Wagner performances. But at the same time, Berger adds that it's important not to let the music be controlled by its dark connotations.

"I think it's imperative to reclaim this music," Berger says, "and not let something as powerful as this music be appropriated permanently by the Third Reich. Ultimately, this is the lesson we take from Wagner for all art. We cannot let anything be defined for us by any demagogues."

"The ability of art to inspire, but also the limits of art to make us good or bad — that's still up to us, and I think that lesson is profoundly illustrated by Richard Wagner."