The Slant: 'The Human Animal'

The Slant: 'The Human Animal' 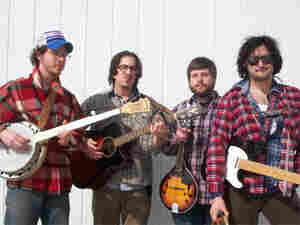 The Slant. Courtesy of the artist hide caption

One of the more difficult things to do in songwriting is crafting concise yet fully formed songs. It's a natural tendency to overwrite, fitting in every idea or phrase that comes to mind. It's much harder to say a lot in not much space, while also making the song feel like it's not some tossed-off vignette or transitional material between lengthier tunes. But the Pittsburgh band The Slant does just that with Old North, an 18-track album on which most songs clock in around two or three minutes.

The Slant formed in the summer of 2005 as a collaboration between two other bands — Atlas and Untitled — looking for a new musical project. The band is composed of singer-songwriter Mark Zedonek; guitarist, songwriter, and harmonica player Andre Costello; bassist Brad Austin; and drummer Zach Dow.

Split into two halves: "The Old" and "The North," the record flows nicely between rollicking alt-country rock and more personal and intimate songs. While not a concept album, the songs all seem to share a timeless quality: Referencing a rural life filled with old trees by rivers, harvest moons, circus big tops, and even Civil War imagery, the songs seem to inhabit an America long since gone.

Much of the album is rooted in typical folk and indie-rock, colored with satisfying peaks of distortion and noise that hint at something a bit darker. The incidental background noise of the room — from fluttering book pages and the hammering of nails into wood to humming television static — bleeds into the instruments, giving the record a roomy, do-it-yourself spaciousness. The result is a collection of songs that feel tactile and spontaneous, as if the listener is there in the band's living room listening in on its creation.

"The Human Animal" — one of the best and yet all-too-short songs — is both brooding and intimately hopeful. Accompanied only by a simple guitar strum and a subtle banjo melody, the arrangement is enhanced with rhythmically intricate backing vocals that add colorful harmonic depth. Singing "Ten thousand voices bringing hardened hearts to rest at home," Zedonek is able to convey a lot in roughly 90 seconds, while leaving the listener wishing for another verse.