Accessibility links
New Amsterdam: A New Label For Classical Music's New Blood With classical music sales waning, it's harder than ever for progressive young composers and performers to get noticed. But the independent New Amsterdam label is documenting the eclectic musical community around its classically trained 20-something founders. 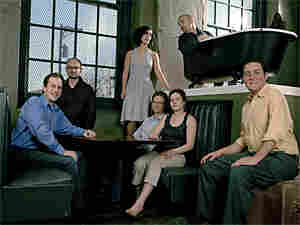 In downtown New York, in the living room of a Greenwich Village duplex, NOW Ensemble — a chamber music group of players and composers from Yale and Juilliard — auditions a new bass player.

Way uptown at the other end of Manhattan, in a third-floor Washington Heights apartment, the duo that calls itself itsnotyouitsme improvises a piece that fills a tiny spare room with a huge sound.

What these sonically different groups have in common is that they're all friends. They're all in their 20s. They all jam together. And their first records are on the New Amsterdam label, founded by three graduates of the Yale School of Music: Bill Brittelle, Sarah Kirkland Snider and Judd Greenstein.

"There's really not a place for young ensembles, young composers, young performers to have that first record," Greenstein says. "Unlike in popular music, where being 27, 28 years old, 30 years old — you're old. In this, you're like superyoung; you're like an infant."

All of the musicians in the New Amsterdam community are classically trained. At a time when the classical-music industry is struggling to sell recordings, the young composers and performers have banded together — much like their colleagues in rock — to release their own records and stage their own performances.

But Greenstein is writing his dissertation at Princeton on hip-hop, and he says the New Amsterdam musicians want to bring all the music that's part of their lives into their compositions.

Composer Brittelle, whose album Mohair Time Warp has just been released by New Amsterdam, is another co-founder of the label. Brittelle studied composition at the Graduate Center of the City University of New York and sang in a rock band called The Blondes.

"I don't personally think about it — what I do as coming from a classical tradition," he says. "I think of the classical music that I've studied and my training as tools to do whatever I want to do. The ability to hear different kinds of music, and be able to translate that into what I'm doing. And the ability to digest things and compose for the kind of instruments that I want to compose for, and have strings and horns, and all this stuff. And really write for electric guitar, and not just have power chords." 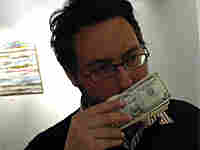 Justin Davidson is a music critic for New York magazine. He says that for today's classical musicians, showing up for orchestra auditions isn't enough.

"They're part of this generation of people who get out of music school with all of these incredible skills, and all of this culture, and all of this creativity — fully aware that nobody is going to hand them a career," Davidson says. "There's no superstructure of an established music industry that is going to pay any attention to these people, because they're not even paying attention to the much more established, mainstream conductors and violinists and orchestras.

"The ability to get noticed by having some record executive take an interest in you and record you — you know, that's really practically a thing of the past. If you want to make recordings, you've really got to do it yourself."

New Amsterdam is not the first group of New Music entrepreneurs to build their own label, performance circuit and community. The collective known as Bang on a Can did the same thing 20 years ago — when they, too, were all in their 20s.

But Davidson says that those composers in Bang on a Can had more in common musically with each other, compared with the New Amsterdam umbrella.

"The interesting thing about this group of people, and New Amsterdam, is the real lack of interest in anything that you could call aesthetic categories, or rules about what does and doesn't belong in their sphere of influence," he says. "And in a way, that can make it — the marketing of it — somewhat difficult, because it's kind of amorphous. But aesthetically, it's really interesting."

Guitarist Grey McMurray and electric violinist Caleb Burhans are itsnotyouitsme — two 27-year-olds who met at the Eastman School of music. Burhans says they sent their first record, Walled Gardens, to Bang on a Can's Cantaloupe label and got no reply. So they signed with New Amsterdam.

"And what Judd was talking about for the New Amsterdam community just sounded so wonderful and appealing," Burhans says. "Plus, like, we're friends with everyone in the group. It just made so much sense to do it like that. Especially at this stage, with the big record companies going down, and downloads being the thing."

The two musicians in itsnotyouitsme create spontaneous compositions using an array of electronics: foot pedals that sample and capture sounds, loop and reverse those sounds in layers, and add feedback and distortion. On top of that, they sing and play melodic lines on violin or guitar.

With so much New Music available now, label co-founder Brittelle says the struggle for the New Amsterdam community is different than it was for previous generations of like-minded composers.

"They were fighting for the right to include popular music in what they were doing," Brittelle says. "I think for us, our battle is against apathy. You know, you don't run into people anymore our age that are like, 'Well, you know, popular music is not valid.' You don't even fight that — it's like, well, yeah, we all grew up listening to that stuff.

You won't find New Amsterdam's music in your local record store. The founders are counting on listeners to go to NewAmsterdamRecords.com and purchase downloads or order CDs — which Greenstein says are things of the past.

"But in order to get critics to the shows, and in order to get people to know about what's going on, you need to have the CD, something that says, 'Hey, we're really serious about this,' " he says. "So much so, we took the time, effort, the money to print a CD, which is kind of this weird, anachronistic and uselessly expensive object. And then send it to you via, like, the post office, which is equally weird and anachronistic. I mean, we have an Internet system set up to avoid all this stuff. And yet there needs to be this marker of effort."

Greenstein says that New Amsterdam has sold around 500 CDs of the label's initial releases since January — not enough to pay anyone a salary. But Greenstein says he's not discouraged.

"We're just three people," Greenstein says. "And we all like to do things like eat, and sleep under a roof. So we have to find a way to make that happen.

"But, that said, it's exciting for the long term. Because it means that in a few years — and we're all young, so we can say things like 'in a few years' and we'll still be young — we're going to have this infrastructure built that will support the next generation, and ourselves, so that people don't have to keep reinventing the wheel."

The founders of New Amsterdam Records say they plan to release between six and eight recordings in the coming year. They say it's a difficult world in which to justify making a new CD, unless it's "amazing." And that's their motto.