Accessibility links
Twin Tigers: 'Red Fox Run' Athens, Georgia band Twin Tigers may have only been around a short time but they are already getting recognized as yet another great band to come out of the well-known music town. 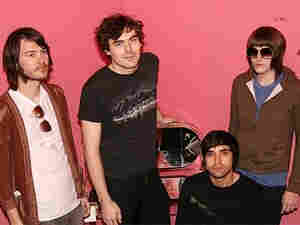 Athens, Georgia band Twin Tigers may have only been around a short time but they are already getting recognized as yet another great band to come out of the well-known music town. Their self-released debut EP, Curious Faces Violet Future is a fierce and brooding, yet melodic collection of songs that shows great promise for future efforts.

Singer and guitarist Matthew Rain and bassist Aimee Morris' formed Twin Tigers in the Fall of 2007 when they began writing songs and making basement recording sessions. They soon added guitarist Enoch Bledsoe and Richard Young on drums to fill out the lineup. The band booked their first live show in early December and began work on the EP with Joel Hatstat of another Athens band, PegasusesXL.

The songs on Curious Faces Violet Future are raw, untethered and adorned with sudden snarls of guitar feed back and vocals muddled in effects. Woven in the trance-like layers are simple but memorable melodies that keep the music grounded.

"Red Fox Run," the EP's first track, opens with a guitar motif soaked in reverb and echo effects. It's soon joined by Rain's howling voice. The band employs plenty of moments of tension and release, building more constrained repeated patterns into an all-out wall of noise, with a flurry of atonal guitars and thunderous drums.

While the band's dark and explosive sound might recall the distortion of Jesus and Mary Chain and Sonic Youth as well as neo-psychedelic groups like The Black Angels, they filter their influences well, pushing into territory all their own.