Accessibility links
New Site Fuses Chess with Hip-Hop Hip-hop fans who play chess can now head to a new online social network site called WuChess. Music and chess have a mathematical rhythm and flow that make them similar, says The RZA, a founding member of the Wu-Tang Clan who also backs the new site. 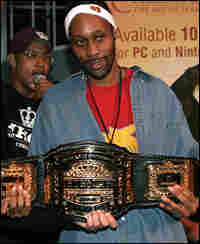 The RZA wins the championship belt for the Hip-Hop Chess Federation's tournament last year. Chess is "the only thing that really relaxes me," he says. Anna Garcia/ hide caption 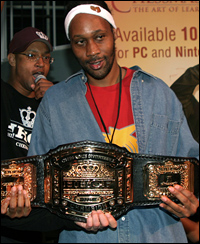 The RZA wins the championship belt for the Hip-Hop Chess Federation's tournament last year. Chess is "the only thing that really relaxes me," he says.

Watch a video of the Hip-Hop Chess Federation Tournament's first annual "Chess Kings" championship. The RZA — of the hip-hop group Wu-Tang Clan — won the top prize, playing and besting his own bandmates in the process.

Hip-hop music and chess share a decades-long cultural history thanks to artists' rabid obsession with the game. And now, they have a new Web site in common: WuChess.com.

The site launched last week as a kind of online social network for chess players who also like hip-hop music. The site's backers include The RZA, a founding member of the hip-hop group Wu-Tang Clan. The RZA also competes in tournaments sponsored by the Hip-Hop Chess Federation, a nonprofit group that teaches chess to high school kids, as well as by Chesspark.com, an online gaming company.

The link between chess and hip-hop is a philosophical one, The RZA says. But done well, both music and chess have a mathematical rhythm and flow to them that make them similar, he says.

WuChess is "a way to travel the world and spread the whole hip-hop culture, as well as the chess culture with it," says The RZA, whose songs contain many references to the game. He says he plays an average of three hours of chess a day, often with fellow artists from the rap world. The RZA is also a chess champion: He won the Hip-Hop Federation's first annual tournament last year.

"It's the only thing that really relaxes me," he says.

WuChess tries to re-create the kinds of scenes played out in almost every major urban park where pickup chess is played: Think of the movie Searching for Bobby Fischer, in which Washington Square Park in New York City is filled with players of speed chess, trash-talking each others' game while listening to music.

On the site, players can chat over instant messages and form social networking groups online. Eventually, the site's founders say it could feature ways to listen to and exchange music.

WuChess charges a $48-a-year subscription, which is unusual for an Internet start-up. Many Web sites make money solely through advertisements. But Chesspark already owns the technology to operate the game. The RZA himself will play on the site, so the company hopes that there's enough loyalty among his fans to draw in users willing to pay the fee. WuChess is also sponsoring The RZA's summer tour — he's been recording albums and touring as Bobby Digital in Stereo --which kicked off this week.

Urban chess players can pick up a lot more than chess pieces at Dupont Circle in Washington, D.C.