Accessibility links
Shearwater In Concert Led by the breathtaking falsetto of singer Jonathan Meiburg, Shearwater plays dramatic songs that are at once majestic and intimate. The Austin band brings this sonic thrill ride to Washington, D.C., for a full concert, webcast live on NPR.org. 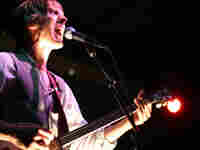 The night began with just Jonathan Meiburg, howling in his breathtaking falsetto over the Black Cat's P.A. The Austin band Shearwater is known to give unforgettable live performances, and it didn't disappoint. One after another, its dramatic songs were at once majestic and intimate, quaking and trembling with a remarkable range of emotion: fragile and sad one moment, explosive and full of fury the next. Shearwater brought the sonic thrill ride to Washington, D.C., for a full concert, webcast live at NPR.org on June 15. The performance began with an opening set by the experimental pop group, Cryptacize.

Shearwater is touring in support of its latest CD, the much-anticipated Rook. It's the band's first release since 2006's Palo Santo — an album hailed by critics for Meiburg's soaring vocals and darkly orchestrated world of sound.

Rook is Shearwater's fifth and richest studio album to date. Made by just three people, the band's improbably grand sound is built out of feedback, strings and woodwinds, horns, harp, and a homemade hammered dulcimer. It's a heartbreakingly beautiful collection of songs with a sense of urgent abandon, as though bursting from an imagined world about to disappear forever.

When he's not fronting Shearwater, Meiburg is a part-time bird scientist — the band's name comes from a type of seabird — as well as a former member of Okkervil River. He's joined by the appropriately named Thor Harris (a thundering drummer) and bassist Kimberly Burke.

Cryptacize is a trio from Oakland, Calif. featuring the music of Michael Carreira, Nedelle Torrisi, and Chris Cohen. Cohen is the former guitarist for Deerhoof. Torrisi fronts the group with playful vocals. The group officially formed in 2007 after Cohen discovered percussionist Carreira playing cowbell in a YouTube video. After signing with the Asthmatic Kitty label, Cryptacize released their debut album, Dig That Treasure, in early 2008.

View an Illustrated Slideshow of the Concert