Accessibility links
Olivier Conan Brings Chicha Music to Brooklyn Conan plays an instrument called a cuatro with Chicha Libre, a band that pays tribute to the classic Peruvian Chicha groups of 40 years ago. 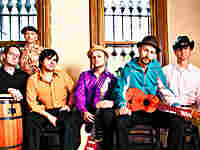 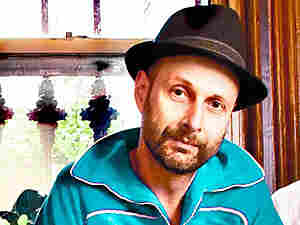 Olivier Conan grew up in Paris, but his musical passion is Latin. He plays a small South American guitar, called a cuatro, in a Brooklyn-based band called Chicha Libre. The group started out paying tribute to the classic Chicha bands of Peru that played 40 years ago. Chicha bands had a rollicking, psychedelic groove, even when they covered "Fur Elise." Conan also runs a bar in Brooklyn called Barbes, one of the few places north of the equator where you can hear music in the style called Chicha.

Conan first fell for the Chicha groove on vacation, walking the street markets of Lima, Peru. He says that all the vendors had a boom box, and that one of them began playing him Chicha. Even with a vaguely Middle Eastern tone and a surfy vibe, the music sounds as if it comes from the Amazon. Chicha borrows from a number of other music styles, including Colombian cumbia rhythms and Beethoven: The band Los Destellos named its 1968 version of "Fur Elise" "Para Elise" and used surf guitar to play the melody.

"I think music has always been globalized," Conan says. "I mean, there's always been this sense that there's a pure music, the platonic image of the music that exists independently of any foreign influences. There's no such thing."

Conan says he thinks Chicha Libre does with Chicha music what British bands did with American R&B. "We take many liberties with the music," he says. "So think of it as free-form Chicha."

The band's instrumentation is slightly different from traditional Chicha groups: His group has only two percussionists and uses an electric guitar and an Electrovox, which looks like an accordion but has all the parts of an organ inside.

The band leader is also the co-owner of Barbes, a bar and community space in Brooklyn that he and Vincent Douglas opened in 2002. The narrow space was a Chinese laundry until they showed up. The tiny performance space at the back of the bar is where the previous proprietors lived, but now a solid community of musicians and artists gathers there.