Accessibility links
As Beaches Creep In, Ownership Disputes Erupt Many dream of owning beachfront property. But when an encroaching shore swept under the Porter's Surfside, Texas, home, the government told them they had to remove the house from what was now a beach. 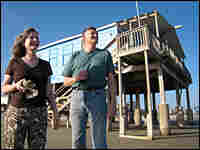 When Brooks and Merry Porter bought their home a quarter-century ago, sand dunes stood between their house and the beach. But coastal erosion, partly due to government projects such as dam and jetty-building, has put the shoreline at their front step. David Baron for NPR hide caption 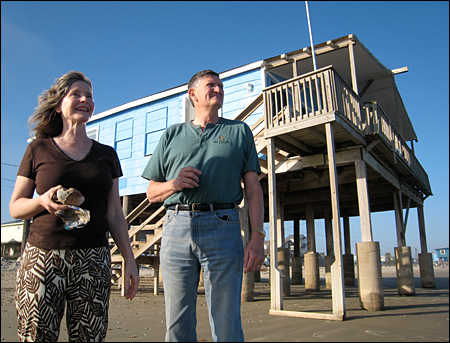 When Brooks and Merry Porter bought their home a quarter-century ago, sand dunes stood between their house and the beach. But coastal erosion, partly due to government projects such as dam and jetty-building, has put the shoreline at their front step.

Because the shore had moved inland, state officials ordered the Porters and some of their Surfside neighbors to remove their homes from what was now considered public beach. David Baron for NPR hide caption 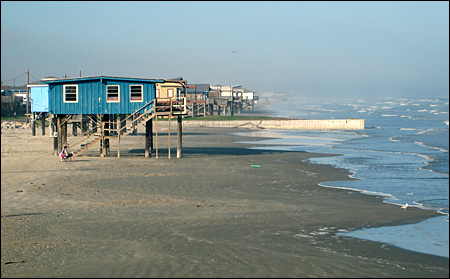 Because the shore had moved inland, state officials ordered the Porters and some of their Surfside neighbors to remove their homes from what was now considered public beach.

Global warming is raising the ocean level and moving shorelines landward. With seaside communities at risk of inundation, some scientists say America needs to plan an orderly retreat from the coast. But if you think such a retreat will be easy, consider the saga of one home on the Gulf of Mexico.

Surfside, Texas, is a small beach town south of Houston. There are no fancy condos here, no high-rise developments. The town, with just one traffic light, is mainly rows of cottages on tidy lawns. At 809 Beach Drive, a sky-blue house sports a sign that displays its name: the Sand Castle.

Brooks and Merry Porter bought the Sand Castle a quarter-century ago for the family to use and to rent out for income.

"We wanted a fixer-upper, because that's what we could afford," says Brooks Porter.

"We were looking for a house that needed somebody to care about it," adds Merry.

The Sand Castle needed a lot of care — it was a wreck — but you couldn't beat the location.

"We had sand dunes and salt grasses growing in front of our house," recalls Brooks Porter. And just beyond the dunes was the beach.

Since then, Surfside has seen some of the worst erosion on the Texas coast. The dunes are gone. So is the salt grass. The house now sits at the water's edge, stranded like a beached whale.

A whale on stilts, that is.

"The house is up out of the ground by a good 10 feet," says Brooks Porter, as he walks beneath the home. Seashells and seaweed litter the sand. "The water — you can tell that occasionally it's going to come up underneath the house."

But Brooks Porter says it's not the water that worries him. It's the state of Texas.

The Porters have been engaged in a decade-long struggle with the state government, and it's a fight that may foreshadow battles in other coastal areas. At issue: What happens when the public beach moves onto private property?

In Texas — and, to varying degrees, in other states — the beach is essentially a park.

Schwartz is an author of the Texas Open Beaches Act, a 50-year-old law that declares the beach a public way.

"If you've got any piece of your structure on what is state land," he says, "then you're not entitled to keep it there."

That's what the state told Brooks Porter and some of his neighbors back in the late 1990s. Because the beach had moved inland onto their lots, they had to remove their homes from their property.

Porter said no. He and some neighbors hired a lawyer.

Houston attorney Ted Hirtz represented the homeowners at more than a dozen hearings in district court beginning in 2001. He contended that the houses shouldn't have to be removed from the beach, because they didn't interfere with the public use of the beach.

"The public can still sunbathe around them," Hirtz argued in court. "The surfers can still surf. No one is adversely affected."

That argument failed. The judge ruled that the homes violated the law and would have to go. Eventually.

For the time being, the judge said the houses could stay while the case was on appeal, but he barred the homeowners from making any repairs. So when an especially high tide knocked out sewer and water pipes several years ago, Brooks and Merry Porter couldn't reconnect them.

That means no using the bathroom in the Sand Castle. "Makes it difficult for spending the night — for just anything," says Merry. But the Porters remained undeterred.

They pressed another argument with the state. They said it's unfair for the government to punish them, because the government created this predicament.

Coastal erosion — here and elsewhere — is not a purely natural phenomenon. Government projects like dams, jetties, and ship canals can rob the shore of sand, and studies show that's what happened at Surfside. State officials came to town to address that issue and others in the fall of 2006.

Patterson offered a solution. He said the state would try to slow the erosion by putting a million dollars' worth of sand on the beach, to help keep more houses from ending up by the water in the future.

But as for the homes already on the beach? He said it's too late to save them. In fact, he said, they have to go to make way for the sand. "The front row is in the way of anything we can do to preserve the other rows," he said.

Patterson offered a solution there, too. He said the state would pay the cost of moving homes from the beach onto inland lots. More than a dozen homeowners accepted the offer, but 14 houses remain on the beach, and among these holdouts are Brooks and Merry Porter.

They say the state's offer was inadequate. The state refused to pay them for their land.

"Both the Texas and the United States constitution spell it out, that you cannot take property from individuals or from families without adequate compensation," says Brooks Porter.

The state says it's not taking anyone's property — the Gulf of Mexico is — but this constitutional argument is the basis of the Porters' continuing lawsuit, which is headed toward a state appeals court and possibly beyond.

"We and some of the other people will fight this, if need be, all the way to the Supreme Court," he pledges.

How this case gets resolved could set a precedent far beyond Texas. What if rising seas threaten one day to swamp skyscrapers in Manhattan or entire towns in Florida? Whose responsibility will it be to move buildings out of the way? Who will take the hit for the lost property value?

Meanwhile, in Surfside, children still play around the homes on the beach. They scoop sand into buckets, upend the buckets to build towers, and adorn the towers with shells and feathers. Then the tide turns, and the castles of sand melt into the sea.

More from the 'Shifting Ground' Series