Accessibility links
Love and Ruin: Saint-Saens' 'Samson and Dalila' Camille Saint-Saens lived from the waning years of music's classical era, all the way into the early decades of 20th-century modernism. The tumultuous, romantic opera, Samson and Dalila is one of his many masterpieces.

In Act Two, as Dalila seduces Samson, she sings the opera's most famous aria, "Mon coeur s'ouvre a ta voix" — "My heart blooms at your voice." This performance is from a collection of arias recorded by Olga Borodina. 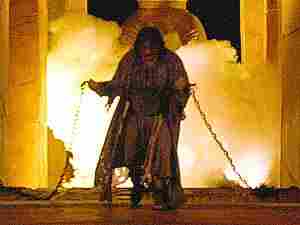 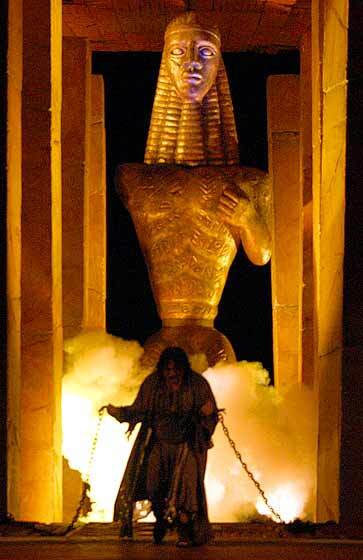 Samson, played by tenor Carl Tanner, gathers his strength to pull down the Philistine temple in 'Samson and Dalila,' from Washington, D.C.

Camille Saint-Saens had one of the most extraordinary careers in the history of music, and witnessed some truly amazing advances, both musical and technological.

When he was born, in 1835, the horse and buggy were the preferred means of transport, and the modern piano was still considered a new instrument. By the time he died, in 1921, Saint-Saens had seen the invention of the automobile, the airplane and the phonograph — and he even left us a few recordings.

Saint-Saens also lived to hear the first strains of 20th-century music — but he didn't like it much. In 1913, he walked out of the world-premiere performance of Stravinsky's "Rite of Spring." Saint-Saens was a romantic at heart, and you can hear it in his work.

Music was something that came easily to Saint-Saens. "I write music," the composer said, "like an apple tree produces apples." An example is his brilliant second piano concerto, composed in a matter of a few days. But things didn't come so easily for Saint-Saens with Samson and Dalila.

When he first decided to set the story to music, he was thinking of a dramatic oratorio. He admired the oratorios of Handel and Mendelssohn, and he was excited about the vibrant new choral movement in France. But his librettist, Ferdinand Lemaire, had different ideas, and urged him to write a full-fledged opera.

At the time, French society was leery about portraying religious stories on stage. A biblical setting seemed more appropriate in the church than in the opera house. Saint-Saens and Lemaire persisted, and the work was finished in 1876.

But their new opera was all dressed up, with no place to go. It waited nine years before Franz Liszt finally staged the premiere in Weimar, and it was another 13 years before the complete opera was seen on a French stage.

On World of Opera, host Lisa Simeone presents the drama in a production by the Washington National Opera, performing at the Kennedy Center for the Performing Arts, in Washington, D.C. The stars are mezzo-soprano Olga Borodina as Dalila and tenor Carl Tanner as Samson.

The Story of 'Samson and Dalila' 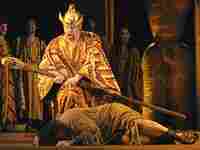 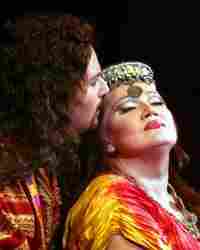 ACT ONE: The opera begins in a public square in Gaza, before the temple of Dagon, at night. A crowd of Hebrew slaves prays for deliverance from the tyranny of their captors, the Philistines. Samson alone does not despair and he tells his people to have faith. God has spoken to him, he says, and the Hebrews must take up arms agains the Philistines.

Abimelech, the ruler of Gaza, orders the Hebrews to be quiet. His god Dagon, he says, is superior to their god. But Samson has inspired the Hebrews, and they band together in defiance. Abimelech raises his sword against Samson, who grabs it and kills him.

Then the High Priest of Dagon enters and curses the Hebrews as they scatter. Though he orders his men to attack them, they are suddenly frozen in terror. Reports start coming that Samson and the Hebrews are destroying the harvest in the fields. The High Priest vows to crush them, and hints that he will use an unconventional weapon to overcome Samson's fabled strength.

Dawn breaks as the Hebrews offer a prayer of thanks to God. Dalila comes down the steps of the temple and speaks silkily to Samson. She invites him to a private meeting in her home. Struck by her charms, Samson feels powerfully drawn to her. But an old Hebrew man warns him to stay away, for his own good.

ACT TWO: Dalila is at home, in the Valley of Sorek, waiting for Samson. The High Priest enters and enlists her help in delivering Samson into the hands of the Philistines. If she does, they'll then have an easy victory over the Hebrews. At first he offers her gold, but she refuses. She wants to defeat Samson on her own, she says, driven by her hatred of him and her devotion to the gods.

ACT THREE: The imprisoned Samson is a changed man. Blinded, and shorn of his hair, he prays for the deliverance of his people.

In the temple, the Philistines are preparing a sacrifice to thank Dagon for their victory. They then celebrate with a bacchanale — this famous orchestral passage is often excerpted on concert programs. Samson is brought in so all the Philistines can mock him. Dalila tells him she never loved him, she only wanted to see his defeat. The High Priest tells a boy to lead Samson to the center of the temple. Samson whispers to the boy to place him squarely between two pillars. He then prays to God to give him one final burst of strength. As the Bacchanale reaches a climax, Samson pushes against the pillars with all his might, and the entire temple comes crashing down on everyone. Samson has his vengeance as the opera ends.