Accessibility links
Myth and Magic Infuse Chilean Island Belief in the supernatural permeates the island of Chiloe, a remote spot where volcanoes rumble to life, earthquakes rock the foundations and tales of sea goddesses, warlocks and trolls abound. 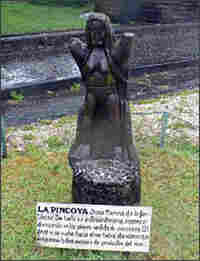 For the people of Chiloe, an island off Chile's southwest coast, the sea goddess La Pincoya is one of the most ancient mythical creatures Barry Gahan hide caption 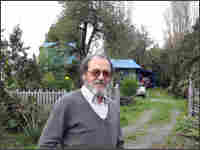 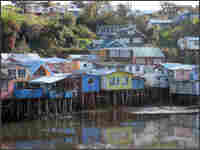 Chiloe's rustic stilt-houses, known as palafitos, accommodate the tides. Their brightly painted exteriors stand out even in the gloom that often envelopes the island, which is about the same size of Puerto Rico. JulieMcCarthy/NPR hide caption 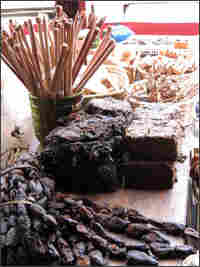 Seaweed and kelp abound at the local market. On Chiloe, the sea has long been a source of sustenance as well as myths and legends. Julie McCarthy/NPR hide caption

As a setting for supernatural spirits, witches and warlocks — Chiloe lacks for nothing.

The atmosphere on this tear-shaped island crackles like a fire on a storm-swept afternoon.

A 20-minute ferry ride off of Chile's southwest coast, Chiloe was the last stronghold of the Spanish conquistadors in Chilean territory. The beliefs, superstitions and legends brought from colonial Spain mixed with those of the original indigenous inhabitants. A rich legacy of myth and magic infuses the island still.

An appendage of the Andes, Chiloe's archipelago was formed from lava and debris from the ring of volcanoes that cluster near the bottom of the world — producing scenery that can be other-worldly. Just across the channel lie snow-capped peaks, but they disappear from view in the island mist. Chiloe's charming stilt houses with their pastel-painted frames provide a small respite from the gloom this time of year. The green hills wear an Irish melancholy. Even the music marked by some 30 folk festivals each year has a Celtic tinge.

When Charles Darwin ventured to Chiloe aboard the HMS Beagle in the 1830's, he wrote: "We saw ... a pair of the beautiful black-necked swans and several small sea-otters. ... In returning, we were again amused by the impetuous manner in which the heap of seals, old and young, tumbled into the water as the boat passed. They did not remain long under water, but rising, followed us with out-stretched necks, expressing great wonder and curiosity."

Darwin also made observations of the islanders, some of whom still can be seen bundled in Chiloe's rough-hewn wool: "They are a humble, quiet, industrious set of men. Although with plenty to eat, the people are very poor ... and ... the lower orders cannot scrape together money sufficient to purchase even the smallest luxuries."

Accessible only by ferry, Chiloe has for centuries eked out its existence from the sea. As modernity creeps in, Salmon farms flicker offshore in the round-the-clock industry. But through the ages, the Mapuche Indians trapped fish and gathered sea urchins here honoring the sea goddess La Pincoya.

Jorge Negron Vera, the author of Myths and Legends of Chiloe, says La Pincoya is one of their most ancient mythical creatures: "If Pincoya appears to fishermen facing the sea, their catch will be abundant. If her back is to the sea, the fish will be few."

And then there's the legend of Huenchula, a girl who falls in love with the King of the Sea. Negron says she might be considered one of the earliest environmentalists.

"The legend of Huenchula lays down a number of rules about how to extract shell fish from the sea: Take them out by hand; don't fight over them; don't use wheel-barrels or trucks to extract them." Use only what you need, the legend goes.

There are darker tales with less benevolent beings that snatch children and force them into servitude. Trauco, the forest troll, seduces young women and is blamed when they return — pregnant.

"Creating the Trauco legend," Negron says, "was a way for society to find a solution for these women who traditionally had been banished."

But in this remote spot where volcanoes rumble to life and earthquakes rock the foundations, stories about the supernatural might be expected. Cesar Ricardo Reyes, 26, says matter-of-factly that he and his friends have seen curious flashes in the night sky and that he doesn't think that they are volcanic emissions from across the channel.

"Our families said it was probably warlocks – the lights were small and had a large variation in the elevation and speed. It was over too great a height for it to have been someone with a flashlight out in the woods."

In Chiloe, it's not female witches but male warlocks who rule. Retired professor and researcher of popular tradition Constantino Contreras Oyarzun says that's not surprising.

"It has to do with the strong machismo of Chilote society even today. That could account for the conversion of witches from European culture into warlocks here," Contreras says.

Locals say that if you throw wheat chaff on the fire, a warlock will betray himself by coughing. If he's flying and you say his name, he'll fall. And some Chilotes also believe warlocks can change form into a dog or a bird.

In the soft glow of twilight, Negron's bulbous nose and sad eyes lend him a gnomish look as he recalls the night a hunchbacked heron flew across the bow of his boat, shrieking. His panicked father ran home to warn the family it was an omen that someone would die. Negron returned to the scene, his father on the prow with a shotgun.

"That night, this bird was not a bird – it was a warlock converted into a bird bringing death. I'll never forget the terror going out that night with my father to get it. The only way to stop the curse," he says, "was to kill that warlock."

Negron acknowledges that plenty of ordinary birds have probably been killed by people who thought the creatures were something they weren't.

Contreras says that for many Chilotes, the supernatural world sits comfortably alongside their centuries-old Catholic faith. The Jesuits who evangelized here, he says, did not wipe out native beliefs so much as incorporate them into a religious context. Chiloe's isolation also has helped islanders cultivate a strong sense of identity allowing the myths and legends to endure, Contreras says

At 64, Negron says he's become a conservative skeptic — a long way from his terrified youth felling warlocks. But he's not so skeptical that he can't instruct his wife on how to drive out the pesky house elf that she insists keeps hiding her things.

Read More About Charles Darwin's Travels Aboard the HMS Beagle.