In Audio Introduction to 'Porgy and Bess'

In Audio Introduction to 'Porgy and Bess' 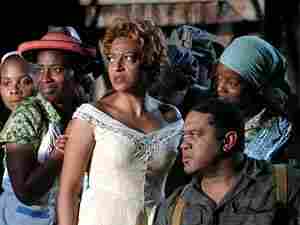 "Is it an opera, or a musical?" For some 50 years after its premiere, that's the question people asked about George Gershwin's Porgy and Bess.

It debuted on Broadway, right? So it must be a musical. On the other hand, the score surely wasn't like any musical anyone had heard before.

And the show had other problems. Its creators demanded that it be done with an all African American cast. Black performers weren't allowed at the Metropolitan Opera, so the opera had a private hearing in 1935 at Carnegie Hall. It ran four hours. After some cuts, it was previewed in Boston, and then had its Broadway premiere a few months later. It closed after only 124 performances — a bit of a flop by Broadway standards.

A touring company then took the show across the country, with protests for and against segregation following it along the way. The first integrated audience to see Porgy and Bess was at the National Theater in Washington, D.C. in 1936.

It took more than 50 years of bowdlerized versions, sometimes performed by an all-white cast, before the complete version was finally performed — that is, the operatic version.

And by now, the old question has been answered: Porgy and Bess is an opera. Many describe it as the "Great American Opera," and it's surely even more than that. By nearly any measure, the piece Gershwin called his greatest work is among the finest of all operas written in the 20th century.

Porgy and Bess is based on Dubose Heyward's novel about a crippled beggar from the slums of Charleston, S.C. The libretto was a collaboration between Ira Gershwin, Heyward and novelist's wife, Dorothy Heyward. George Gershwin worked on the opera in Charleston itself, and on James Island, where the music and traditions of the Gullah community gave him inspiration. Added to the score's unique musical palette are traditional black church music, chords from Gershwin's Jewish heritage and the quintessential swing of American jazz.

On World of Opera, host Lisa Simeone presents the Great American Opera straight from the nation's capital, in a Washington National Opera production from the Kennedy Center for the Performing Arts, on the banks of the Potomac in Washington, D.C.

The Story of 'Porgy and Bess'

ACT ONE: As the action begins, we hear a piano playing the blues, and the young mother Clara sings to her baby. Her song is the first of the opera's many hit tunes, the lullaby, "Summertime." Men return from work, and there's a noisy craps game. Everyone is in good spirits, but when Bess and Crown show up, there's trouble. Crown picks a fight with a man named Robbins, and kills Robbins with a cotton hook.

The crowd scatters, and Crown takes off, leaving Bess to fend for herself. She bangs on doors, trying to find someone to take her in. Everyone turns her away — except Porgy, who silently invites her into his room.

For the next scene, everyone is gathered at Robbins' wake, where there's a plate to collect money for his burial. The police show up, needing a suspect, and they accuse an old man named Peter. He tells them Crown is the murderer, but they haul Peter off as a material witness. Serena sings the plaintive, "My Man's Gone Now," and Bess, who's now living with Porgy, leads everyone in a spiritual, "Headin' for the Promised Land."

ACT TWO: Jake and his fishermen are preparing their boat. With Bess at his side, Porgy is in good spirits, and sings the famous number, "I Got Plenty O'Nuttin." Sportin' Life shows up, peddling his drugs, but Maria tells him in no uncertain terms that he and his business are not welcome. When a phony lawyer offers to sell Bess a divorce from Crown — even though the two were never married — Porgy pays him. Fake or not, the divorce makes his relationship with Bess seem more official.

When people go inside, Sportin' Life confronts Bess and offers her cocaine. She says she's staying with Porgy, and "living decent." Sportin' Life is skeptical, but when Porgy threatens him, he leaves her alone.

The whole community is planning a picnic on Kittiwah Island. Porgy isn't able to board the boat, but he urges Bess to go without him. The two sing the opera's great love duet, "Bess You is My Woman Now," and Bess leaves with the others.

Out on Kittiwah, Sportin' Life — irreverent as ever — entertains the picnickers with "It Ain't Necessarily So." When everyone heads for the boat home, Bess lags behind and is confronted by Crown, who has been hiding out on the island. Bess tells him she's "with Porgy now," but Crown laughs that off. He says that a cripple like Porgy could never give her what she needs — while he, on the other hand, can satisfy every desire. Bess tries to fight him off, but Crown overpowers her and drags her into the underbrush.

Back at Catfish Row, Jake boards his boat and heads out to fish, waving off warnings about the ominous weather. Bess has returned after Crown kept her on Kittiwah Island for two days. She's delirious, and Serena prays for Bess's health. As the prayers conclude, vendors make their rounds: the Strawberry Woman, the Honey Man and a man selling "devil crabs."

Finally, Bess comes around, and calls out to Porgy. Porgy knows Bess has been with Crown, but that makes no difference to him; he still wants her to stay. Bess tells him Crown will be coming for her. Porgy says not to worry, and Bess starts the beautiful number, "I Loves You Porgy."

When the hurricane bell sounds, the people of Catfish Row gather in Serena's room to wait out the storm. They're worried about Jake, who is still out on the water in his fishing boat. Then Crown arrives. He mocks the hurricane, and God's power along with it. When Jake's boat is spotted, upside down in the harbor, Clara runs out into the storm to search for him. Bess screams for a man to go after Clara, and Crown is the only one who responds, while the others continue praying.

ACT THREE: The people of Catfish Row pray for Clara, Jake and Crown. All three seem to have been lost in the hurricane. But that night, Crown reappears. He sneaks into Catfish Row, planning to take Bess away with him, but Porgy is waiting. The two fight and as Crown underestimates Porgy's strength, Porgy kills him.

The next day, the police take Porgy away to identify Crown's body. Porgy is terrified. Sportin' Life tells him that when a killer looks at his victim's body, the corpse's wound will begin to bleed. Porgy has no choice but to go with the police.

With Porgy gone, Sportin' Life again tells Bess that the two of them should go off to the big city, singing, "There's A Boat That's Leavin' Soon for New York." With her looks, he says, they could make a fortune. At first she resists, but when Sportin' Life tempts her with cocaine, Bess gives in, and goes with him.

The opera's last scene begins as Porgy returns, triumphantly, from police custody. He's made money shooting dice in jail, and he's brought gifts — including a new red dress for Bess. But she's not there. His friends tell him he's better off without her, but Porgy demands to know where she is. Finally, they tell him that Bess has gone to New York with Sportin' Life. Determined to find her, Porgy collects his crutch and sets off, to the opera's final number, "Oh Lawd, I'm On My Way."