Accessibility links
The Ting Tings In Concert The Ting Tings' infectious dance rhythms (and a coveted spot in an iPod commercial) have made the English pop duo one of the year's most exciting and hyped new bands. Hear the duo, featuring drummer Jules De Martino and guitarist-singer Katie White, recorded live in concert, from Washington, D.C.'s 9:30 Club.

The Ting Tings in Concert

Listen
The Ting Tings In Concert

The Ting Tings In Concert

The Ting Tings in Concert 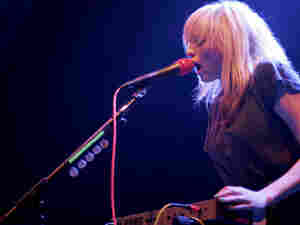 Katie White of The Ting Tings performing at the 9:30 Club in Washington, D.C., joel didreksen of kingpinphoto.com hide caption

The Ting Tings played for only 45 minutes at Washington, D.C.'s 9:30 Club, but they served up enough infectious dance pop to exhaust a wildly enthusiastic audience that scarcely stopped jumping up and down through the entire show.

The English electro-pop duo, featuring drummer Jules De Martino and guitarist Katie White, ran through much of their debut album, We Started Nothing, including the hits "Shut Up And Let Me Go," (featured earlier this spring in an iPod commercial) and "That's Not My Name," the band's first single.

De Martino and White were the only two musicians on stage, but there was no need for backup. Their sound was incredibly full and layered, due in no small part to De Martino's remarkable juggling skills, playing both the guitar and drums at the same time, while singing. But White was equally impressive, orchestrating a knot of effects boxes to loop her vocals while she hopped back and forth between keyboards and her own guitar.

The Ting Tings' members have come a long way in a short time: White and De Martino formed the band in 2007. After playing some house parties and small clubs, the two self-released the vinyl single "That's Not My Name" with "Great DJ" on the B-side. The discs quickly sold out, word of mouth spread, and the band's MySpace page drew nearly two million visits. By the end of the year, The Ting Tings had signed with Columbia Records.

One of The Ting Tings' biggest breaks came in April 2008, when Apple featured the band's song "Shut Up And Let Me Go" in a TV ad for iPods. The track became an instant hit.

"We didn't know what sound we were looking for," White says. "We didn't even plan on being a band. We didn't think anybody would be interested in what we did."

Katie White grew up on a farm outside Manchester. "It's so cold and so boring that there's nothing to do," she says. "So all you do is sit and make music. It's just gray skies. I really did just spend my entire childhood bored. I listened to really rubbish music growing up, don't know why. Bad music, bad pop. Whatever crap was on the local radio. I grew up as a teenager in the 1990s, so girl bands and boy bands were all the rage. I had a Spice Girls pencil case."

Jules De Martino, who's 10 years older than White, grew up in London. He started playing drums when he was 13, inspired by his parents' collection of Beatles and Elvis Presley records. "My approach to music was very strange," De Martino says. My mum said that I'd always listen to the B-sides. I was in love with what was going on with the B-sides. Musically, I was into production, and the B-sides always had something more experimental, not necessarily driven by the hits. I was attracted to that. The flipside of a single was usually the strongest track."

These days, White and De Martino are enjoying the ride and just trying to have fun. "We didn't expect this to happen," White says. "I think that's why it worked. Because we were so carefree, we just made the music for us, not for anybody else. We just wrote songs that we loved. It's all going really well, and I don't know what it all means. We're just going to go blow in the wind. We got this far without pre-planning or sitting down with battle plans."